In addition to feces, the streets of San Francisco are paved with shattered glass. 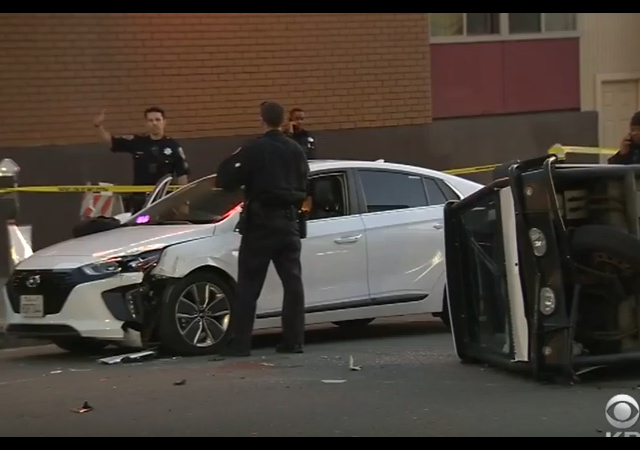 As if feces-strewn streets, needle-contaminated parks, and infectious diseases were not enough to repel potential tourists, a California law has resulted in a loophole that leaves many car break-ins unpunished.

Law enforcement is stymied by a state law that says it only counts as a felony burglary if the car doors were locked, according to the Los Angeles Police Department.

“It’s ridiculous that under current law you can have a video of someone bashing out a car window, but if you can’t prove that the door is locked you may not be able to get an auto burglary conviction,” Democratic state senator Scott Wiener, who proposed changing the law but got pushback for the second year in a row, told the Los Angeles Times in December.

According to a tracker published by the San Francisco Chronicle, an average of 66 “smash-and-grab” car thefts were reported each day in San Francisco in December. Many more go unreported.

Wiener stressed that many of the victims of car theft are tourists who have no way of returning to testify that their car doors were, in fact, locked.

And while San Francisco’s tourists suffer from the unintended consequences of California rules, California residents in the more-red, less-prosperous Central Valley are also dealing with rampant auto theft.

Nine of the top 20 metropolitan areas in car theft rate in the United States are located in California, including Valley cities Bakersfield, Merced, Modesto and Stockton, according to a new study from insurance shopping service Insurify.

Over 770,000 cars were stolen last year across the country. While that’s still a sizable number, thefts are down 55 percent since 1991.

According to data from the National Insurance Crime Bureau, over 2,000 cars are stolen every day.

So far, the state legislature has balked at one representative’s requests to plug the loophole and make obtaining convictions easier.

The proposal, which would eliminate a requirement that prosecutors prove a car’s doors were locked at the time of a break-in, has been shelved two years in a row in legislative committees. Lawmakers struggling with prison crowding and public pressure to enact criminal justice reform have been reluctant to do anything to put more people behind bars.

But local officials and the legislator behind the bill say the legislation is needed to help chip away at a statewide car burglary problem that they believe has reached crisis levels in some cities.

“It’s ridiculous that under current law you can have a video of someone bashing out a car window, but if you can’t prove that the door is locked you may not be able to get an auto burglary conviction,” said state Sen. Scott Wiener (D-San Francisco), who introduced the legislation at the request of the San Francisco district attorney’s office.

How out of control is the situation? This week, officers arrested four car burglary suspects after slamming into a parking control officer’s vehicle on a busy San Francisco street.

In the video, you can see the four suspects run from the scene. Officers were able to track them down and arrest them.

“At the time I didn’t know that the people were running away from breaking into cars,” said rideshare driver David P.

The parking control officer was taken to the hospital with non-life threatning injuries.

“I think it’s horrible. I see it all day long. I see broken glass all the time,” said David.

In conclusion: It looks like in addition to feces, the streets of San Francisco are paved with shattered glass.

It would be great if the people who live in these cities would finally reach the point of seeing that they need a change of leadership in their cities. Wondering how much longer it will finally take them to get tired of the condition of their once beautiful state, and vote out the do nothings .

They will never. Take a look at other Dem strongholds, Detroit or Baltimore. They would literally die first rather than blame their insane policies for the devastation.

notamemberofanyorganizedpolicital in reply to rdmdawg. | January 10, 2020 at 1:48 pm

Not a loophole in law but a feature. Listen and pay attention to aoc and or kap and get at least somewhat clear on stuff like this.

Yes. Somebody wrote that law. Who wrote it? Who voted for it?

The law is not ridiculous. What is ridiculous is the some POS wrote the law and others voted for it. They have names. They have an agenda.

What is also ridiculous is that people actually elect Democrats and then wonder about the consequences.

The law is just words that were deliberately written. The problem is part of the agenda. It is not a “loophole.”

Create a problem and then exploit it. By any means necessary.

I don’t know which gives me more peace about the horrible stuff going on along the left coast:

1- The people getting terrorized are the ones who KEEP voting for people like Newsom and Inslee.

2- The people getting their car windows smashed in liberal cities are the same ones who either would smash your car window for having a Trump sticker OR would smile about someone else doing it.

Last night the wife took the Malinois with her in the minivan. To run an errand where it was necessary to park in a Home Depot parking lot (basically tool theft depot for tweakers). A lurker came up and peared in the window thinking the van was empty and got a face full of ear piercing fur-missile.

Perhaps they are experimenting with a new replacement asphalt that requires no labor to install and free ingredients?

California Residents are getting what they vote for. If they want to live in a civilized society stop voting for the Stanlinist – Democrat Party.

California residents are getting what the Bay Area and the Los Angeles Basin vote for. Just like NY state gets what NYC votes for, and Colorado gets what Denver votes for.

I spent formative years in California, under a Republican governor. My parents always locked their doors — house, car, tool shed, you name it.

I live now in a far less (ahem) cosmopolitan place, and I can only shake my head at people who leave anything unlocked, ever.

Even when I lived in the sub-arctic, where sometimes (very very very rarely) I might have found it expedient to leave my car running, I carried a spare car key so I could lock the door — because so many of my neighbors who left their cars running without locking the door, lost their cars to GTA wannabes..

Why would anybody vote Mr. Pitts down?

Probably because I admitted that I used to leave my car running. I’m an eco-criminal now.

I can’t walk away from my car for long before the doors automatically lock themselves, usually around 30 seconds to one minute. Even so, why should it make difference to a thief who smashes the window to get in? Politicians are making it increasingly inviting for criminals to commit crimes by assuring them that there will be no consequences. Starting by releasing dangerous criminals from prison early in droves, and eliminating bail as a prerequisite for pre-trial release and refusing to go after illegal immigrants (and them giving them free everything.

We are killing ourselves with stupidity.

I live in the suburb of a southern city. I rarely lock either my home or my car.

San Franfeces, a dystopian $hithole. I won’t ever go there again, let them starve.

rural area. cultivated the fact I am a crazy a**hole. I get left alone.

I frequently read how bad the infrastructure is in California, especially the roads, so I think the time has come for California to bring back the chain gangs and put them to work building new roads. The hell with the crowded prison rhetoric, given California’s reputation for having a wonderful, a tent and a cot inside a secure fenced in area with an over abundance of barbed wire should suffice as holding pens.

I frequently read how bad the infrastructure is in California, especially the roads, so I think the time has come for California to bring back the chain gangs and put them to work building new roads. The hell with the crowded prison rhetoric, given California’s reputation for having a wonderful climate, a tent and a cot inside a secure fenced in area with an over abundance of barbed wire should suffice as holding pens.

It would be enough if the Ledge would simply spend the money the taxpayers authorized, on the same projects that were promised.

It’s a persistent practice, the Ledge diverts funds to their pet projects and contractors.

For example, the water “crisis,”

Taxes and prices for utilities were raised, in response to the next-to-the-last drought. In San Diego country, that money was used (as promised) to secure more water storage, and when the opportunity came, to expand the storage.

That was the only part of the state that used that aliquot of money for the purposes sold to the voters. When the next drought came, San Diego had water.

This is why my son has his job. Plainclothes CHP, tracking down stolen cars rings. He preferred that to giving soccer moms tickets, the only people he was allowed to ticket. Illegal? Had to let them go. It’s why we fled CA. A beautiful state, gone mad.

We took out the battery in our spare car in the driveway….good luck thief. Our neighbors have had cars taken out of their garages. We are glad to very part time residents of CA.

Maybe they can impose a Glass tax to raise revenue.

Sign of the times: there are flashing road signs going up near me warning drivers not to leave things in their car.

So in CA now, if you lock your car doors, you are a hater. Personally, I think the same rule should apply to houses and businesses. No more felonies.

Failure of the government to maintain a safe and moderately civilized environment creates an opportunity for entrepreneurial gangs to deliver the rough justice needed. That was the incentive for the creation of La Cosa Nostra. I would need how long it will be before the same groups form in California.

1) California cannot be fixed. It is not possible. Too large of a percentage of their population, definitely a majority, are Leftists with no contact with reality and they are reinforced by an army of foreign invaders.

2) No one with half a lick of sense should stay in California. Sell out and come back to America.

4) Don’t forget to mock them ceaselessly for their idiocy. It needs to become a cultural meme.

I don’t even consider California a part of America anymore.

What’s next? – part of the proceeds of the money from the thefts gets kicked back to hunter biden? Newsom?

This only goes on because the majority of people don’t face these chances at any time. They live in protected areas.

Their employees are mostly those who cannot complain so it’s left to those in the middle to be the targets.

They’re too invested to move and unable to get fair representation.

This is happening in Virginia now also. If they enact laws that make it easier for Democrats to get elected we’ll have a full fledged state on the East Coast that will have all the squalor of San Francisco.

Bon apetit. I blame the voters and the lying media that the voters relied on for their (dis)information.