Same as it ever was 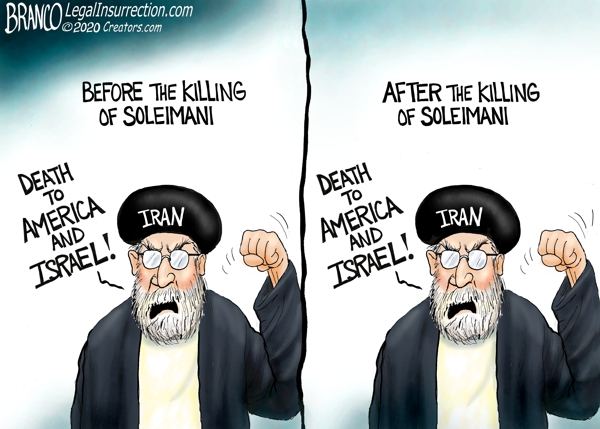 Yeah, all these Western pro-terror MSM news sites were running the story of Iran hoisting their Red Flag of Revenge up flagpoles all over Iran.

Like things are gonna be different than the last 1400 years.

And all this time the RED Flag Of Revenge really has an Eagle, Globe and Anchor on it.

Thank you DJT for takin’ out the trash.

Yup broken records and all that. To change their tune would admit to needing to be fixed, something the likes of those who rule Iran would never admit to.

What they do matters more than what they say. The Iranians have a wonderful opportunity to engage in Holy Jihad against the United States and a President who will make them find God. Let’s see what they do.

I think they’re chanting just a little louder now, or maybe with a bit of fear in their voices, so there is that.

The remains of Qassem Soleimani, the Iranian military commander killed in a US drone strike, were apparently placed in a cardboard box and flown out of Iraq across rows of passenger seats, new video shows.

The recording shot aboard a Mahan Air flight and posted on Twitter appears to show Soleimani’s coffin and those of others killed in the attack on an Airbus from Mashhad to Mehrabad Airport in Tehran — as a tribute video plays on one of the plane’s screens.
https://nypost.com/2020/01/06/qassem-soleimanis-dead-body-flies-coach-back-to-iran/

Once again AF is on the cutting edge.

Meanwhile back at the france…….

Coming to a Country Near You: France Rejects Prosecution of Muslim Who Butchered Jewish Neighbor While Shouting “Allahu Ackbar”

Democrats are suing the iraians to make that slogan their very own….
As seen in a meme.