At Davos, Trump dismisses climate alarmists as ‘prophets of doom’

At Davos, Trump dismisses climate alarmists as ‘prophets of doom’ 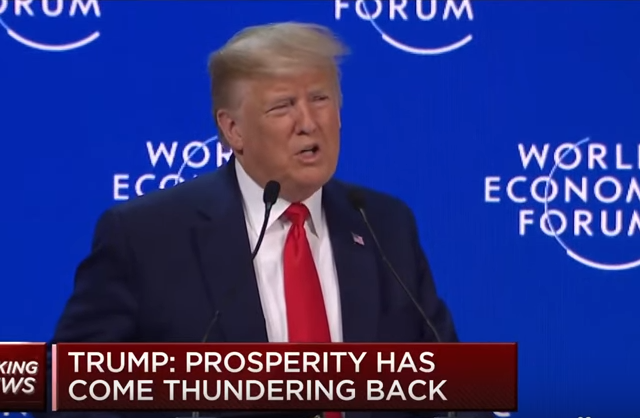 While much of the American media was tuned into the impeachment drama, President Donald Trump gave an epic address at the annual meeting of international business leaders this year at Davos, Switzerland.

How can you tell in was an excellent address? Because the mainstream media is clutching its collective pearls about its America First focus.

At a conference dedicated to multilateralism and earnest discussion of the world’s most pressing problems, the American president used his keynote address to reel off a laundry list of his domestic accomplishments, promote the US economy and dismiss climate activists as “prophets of doom.”

He didn’t take questions from his host, World Economic Forum founder Klaus Schwab, or the elite audience of leading executives, bankers and politicians.

During one portion of his delivery, Trump noted that he was going to join the One Trillion Trees initiative. Then he went on to skewer climate alarmists.

We’re committed to conserving the majesty of God’s creation and the natural beauty of our world,” Trump told the world’s top business and political leaders.

He added, to sustained applause, that the US “will continue to show strong leadership in restoring, growing and better managing our trees and our forests.”

But he also lashed out at “alarmists” — the “perennial prophets of doom and their predictions of the apocalypse” — though he didn’t explicitly mention climate change, which is a major theme, along with sustainability, in this year’s annual forum.

I will simply point out that the adopting the trees initiative is a smart move for Trump, even though the plan is supposed to be related to “carbon offsets”. The trees will create more lumber, more jobs, and enhanced land management practices will reduce wildfire dangers. That’s a lot of win for a leader who began his career in construction.

Trump also spoke on a wider variety of subjects, including his agenda, the state of the economy, and the U.S.-China trade deal.

…Thunberg brushed aside Trump’s announcement that the U.S. would join the economic forum’s initiative to plant 1 trillion trees across the globe to help capture carbon dioxide from the Earth’s atmosphere.

“Planting trees is good of course but it’s nowhere near enough,” Thunberg said. “It cannot replace mitigation,” she added, referring to efforts to drastically cut emissions in the near term.

Thunberg accused leaders of “cheating and fiddling around with numbers” with talk of cutting emissions to ‘net zero’ – that is, emitting no more carbon than is absorbed by the planet or technical means – by 2050.

Clearly, the will be no appeasing Thunberg and those who have bought into the politicized science. In fact, the topic of her speech was “averting climate apocalypse”, which pretty much made Trump’s point…big league!

He is right. It is perennial, the predictors of doom were active among the ancient Greeks.

There is nothing new under the sun, at least from these scolds.

Boy did they lose their stuff over his speech. I love it.

Yeah, but it was what they needed to hear.

Which is a refreshing change from the last President.

Europe can choose to take direction from a loud mouthed kid, but DJT told them, “No thanks, we will take our own, better path”.

Here’s one of the things he said directly to the globalists today. After listing some of the hand-wringing doomsday scenarios of Chicken Little known as the CFR put forth over the years (overpopulation; mass starvation; end of oil),

At 24:30, “These alarmists always demand the same thing – absolute power to dominate, transform, and control every aspect of our lives. We will never let radical socialists destroy our economy, wreck our country or eradicate our liberties. America will always be the proud, strong and unyielding bastion of freedom.”

Okay, well-stated words, and I believe DJT believes them. But are they true? For example, “We will never let radical socialists . . .” Take the 10 planks of the Communist Manifesto, understanding that socialism/communism is a total government form of oligarchy. Some planks have made greater inroads into America than others, but the point I’m making is that each one of the planks has been activated in our country.

America elected Obama, twice (!), who sought to destroy our economy, wreck our country, and eradicate our liberties. Hillary the Harridan would have carried the ball even farther. All Democrats want to continue traveling the same road. And we’re well down that road. How do I know? Because at the moment the Ds control the House each one of whom was elected by the people! So much work remains to educate the people on the purpose of our Constitution = to limit. Ds take the oath but mean not a word of it.

By a narrow majority. And it would be even narrower if not for the ten or so RINOs/NeverTrumpers who unexpectedly retired right before the midterms, in a bid to throw the seats to the Dims.

Instead of having a know-nothing child scold the adult world as if they really expect us to heel, why not drop the charade and just use a spokesclown or cartoon character? Ronald McDonald hasn’t been seen for years. Maybe he’s available. Or maybe Ku Klux Klam?

The Grimace would be better.

I agree, Grimace would be better. However, if Grimace isn’t available, Mayor McCheese would be a good second choice.

I can get behind this guy.

How can you tell in was an excellent address? Because the mainstream media is clutching its collective pearls about its America First focus.

After that opening I don’t even have to know what he said. That’s enough for me to know it was a good speech. I don’t care if he read Green Eggs and Ham.

They’ll just whine about DJT abandoning “established norms” because he said “prophets of doom” rather than the tried-and-true “nattering nabobs of negativism.”

It’s hard for me to take the entire Davos meeting seriously, when they put on a trained seal, and applaud it.

President Trump speaks for Americans, a refreshing change from the presidents in the recent past.

Trump is 100% right. C.K. Chesterton said (paraphrasing): When a man ceases to believe in God, he doesn’t believe nothing; he will believe anything.

From the 1960s population time bomb, to the 1970s global cooling, to nuclear war in the 1980s, to peak oil and global warming in the 1990s, and now climate change and World War 3 with Iran or North Korea, the god-less left has lurched from one death cult to another. They look for meaning in earthly causes, but, to steal from Jordan Peterson, they are incapable of setting their own house in order before the criticize the world. Sad.

Bet we can find many good uses for this quote this year.

Prophets, and profits, of doom, catastrophe, and other progressive processes.

People concerned for their kids, not wanting to take a chance that big business is corrupt – “Why would we not just stop polluting so much, just in case?”

Everyone else – “Nope. Money now is more important, regardless of future risk. And there is no corruption in big business. They always tell the truth. There is no chance that the climate is changing because of the addition of billions of people to earth, and the removal of oxygen producers.”