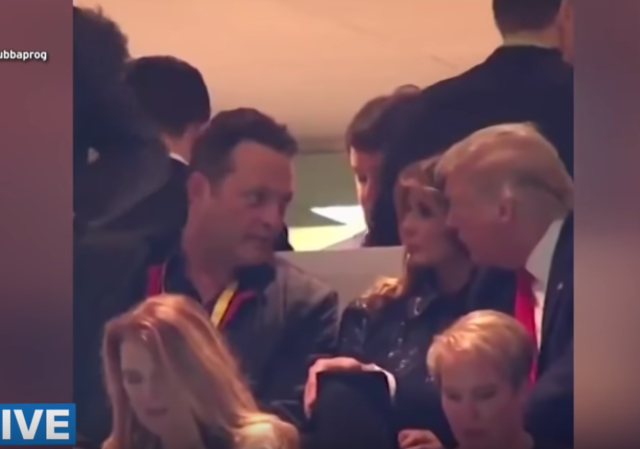 I’m so old, I remember when it wasn’t controversial to shake hands with a sitting president. But in the era of Idiocracy, being friendly with someone the media abhors renders you a vulnerable target and this is the Vince Vaughn edition.

Vaughn, actor and funny man, is a well known libertarian, which is definitely not Republican. Not that it matters nor should it matter. During Monday’s College Football Championship Game, Vaughn shook hands and briefly chatted with Trump. And now people of the internet are angry.

All of you saying calm down, Vaughn is shaking the hand of the man who is hell bent on destroying not just our democracy, but our survival in the world community, for his personal benefit. Wake up!

Shaking the hand of the man who colluded w/foreign leaders against his own country, instituted a law that lead to kidnapping & deaths of young children, recklessly brought America near to war & resulted in the deaths of 176 ppl shot down in retaliation, @VinceVaughn… #Complicit

You get the idea. But the haters can shove it. Here’s an awesome story about Vaughn:

The Day I Met Vince Vaughn

When I was in Iraq, in 2005, I was stationed in an extremely dangerous area. At the time, the most hostile combat area in the world. We lost a lot of good men and our base was mortared or shot at almost daily. Leaving the wire was worse in terms of violence.

I say all of this because no one stopped at any of the FOBs under 108th Armor’s control.

We heard that comedians, actors/actresses, cheerleaders and musicians were visiting the troops in Baghdad, or in Taji, or in Tallil, but they’d never stop in Mahmudiyah. They’d never endanger themselves by visiting the Triangle of Death.

No one, except Vince Vaughn.

Vince stopped at FOB St. Michael purely because he was told that no one stopped there. He went around our base, talking with every soldier. He signed photos and took photos while holding a sign that said, “If you can dodge an IED, you can dodge a ball.”

He even sat and played me, a lowly medic, in NCAA football in our haphazard, poorly constructed smoke shack. He played as Virginia Tech, if I remember, and I played as Texas Tech.

He was relaxed even though we were mortared when he landed and he had to lay on the helipad (everyone around him was still standing as we were accustomed to it, but we won’t fault him for that.)

Here’s the thing. We had lost multiple men in the days leading up to his visit and the constant combat was exhausting… but Vince Vaughn is an entertainer, and he used his skills to enable us, for just a few hours, to forget the horrors of the conflict we were in at great danger to himself.

So, sure, nobodies behind a keyboard will fault him for shaking the President’s hand. Nobodies will say that he needs to be cancelled. Hollywood hacks who flew over our base will judge him. But I, for one, know better. I know that he’s a hero and that I will support him in his endeavors as he supported me in mine.

Please, let others know about what Vince did. He deserves credit, although, I know, he’s asked for none.

@bubbaprog has a long history of this type of [email protected]

I wonder if Vaughn will issue a groveling apology. The Wokestapo on Twitter is of no real consequence, but Hollywood and the rest of the “entertainment” industry prides itself as being more-Commie-than-thou. A few phone calls from the Soviet bureaucrats who run the swamp can end many future work opportunities for Vaughn permanently, thus wrecking his career.

OTOH – J.K. Rowling has not yet groveled before Wokestapo for being an unabashed TERF. Of course, Rowling is an uber-rich multimillionaire who has already made her FU money many times over, so even if she never sells another book she is fixed for life. And I doubt her galaxy-sized ego will allowed her to prostrate herself before those whom she considers her inferiors. So maybe Vaughn will take a lesson from her and tell the Wokestapo to FOAD.

This has already back-fired rather badly on the left. People have had enough of this.

Appreciate what Vince did at that fire base that day.

Yet the Left lines up to kiss Obama’s rear who is everything the Left accuses Trump of and more (Obama is a genocide enabler). I have to admit I would never give even a penny to a FOO (friend of Obama).

Obummer could take a half-dozen impeachable actions before breakfast and the fawning media would only talk about what syrup he likes on his pancakes.

Trump can’t even sit down for breakfast without the deranged media trying to spin it as an impeachable act.

Listen, we all know the complainers are anti-American pieces of trash with very limited education and possess low intelligence.

If the trash complains, that means it’s a good thing.

On the other hand, I care immensely that Fisher Industries of N. Dakota got the go-ahead to build more private fencing on the southern border!!!

During my first Iraq deployment I was also on a remote FoB (forward operating base) that was under daily harassment fire both indirect and sniper. Vince Vaughn was one of the only USO tour folks to show up. We were told he only wanted to visit the places other folks wouldn’t travel. Seemed like a down to earth, nice guy.

I should point out that this location was so bad that CORPS HQ ordered the ‘combat stress team’ of shrinks sent out due to our casualty rate to ‘help us adjust’ to the reality of combat. They were on site about 30 minutes and we started taking indirect fire and sniper fire. They left immediately after the attack without giving their presentation or providing any access.

As for all the hoopla; WTF really, two celebrities, one of whom happens to be President, attend the same event and shake hands during a conversation lasting a couple minutes.

TDS overload. These twitter dwellers are going to be very disappointed in November. They exist in their own little world and reality is going to kick them again.

We now know the faith (Twilight), religious (Pro-Choice), and ideological (progressive liberal) bent of the witch hunters and warlock judges.

Well. He know how to throw a wrench into things….. Obscure Dodge Ball reference.

Once upon a time, there was civility. Now, it seems, that’s not possible. I like to think it could be possible, but there is too much hatred. Not just policy differences, or dislike, but deep seated hatred. To the point of truly wishing terrible things to your enemy. Enemy, not just opponent or adversary. Too bad.

It’s how fascists deal with “fascists”. They eliminate all of the undesirables on their way to forming a “majority”. That’s why voting doesn’t work for them and they end up building “re-education” centers. We’re getting there too.

If the Virginia gun owners are any indication, we are well on our way to standing our ground and forcing them to back off or come right out and fight us. Our main obstacle right now is massive voter fraud in 2020. I hope the feds are on top of this because the states sure aren’t.

Vince has always been a colossal doucebag

Doucebag? What in the hell is a “doucebag”. You’d think that if these precious little snowflakes wanted to insult a person they’d actually spell the damn insult correctly.