Yang is more in touch with Americans than the other candidates. 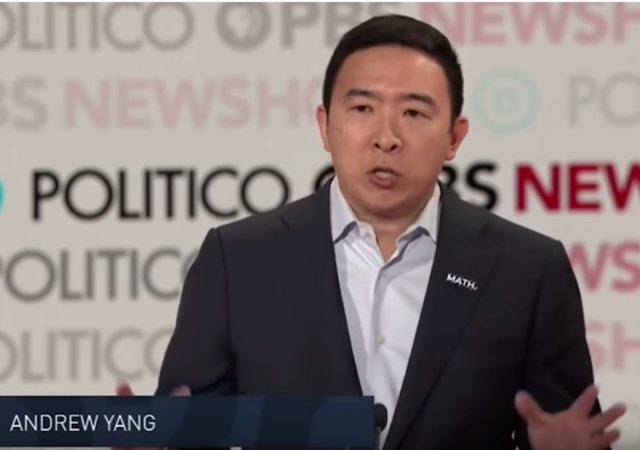 The Democratic debate on Thursday night began with a question about the House’s vote to impeach President Donald Trump.

The majority of the candidates used the opportunity to criticize Trump, but entrepreneur Andrew Yang went in a different direction.

Yang declared: “We need to stop being obsessed over impeachment.”

He explained the Democrats should “start actually digging in and solving the problems that got Donald Trump elected in the first place.”

Yang encouraged his fellow Democrats to focus more “on the discontent of voters across the country who feel abandoned by Washington lawmakers.”

He pointed out that the more the Democrats act “like Donald Trump is the cause of all our problems, the more Americans lose trust that we can actually see what’s going on in our communities and solve those problems.”

Yang held onto his position after the debate in an interview with CNN:

Once offstage, he doubled-down on his answer, telling CNN that he doesn’t remember “anyone [on the campaign trail] asking me a question about impeachment.”

“Americans are not focused on this in the same way the networks are,” he said.

He pointed to the lack of bipartisan congressional support, particularly in the GOP-controlled Senate: “To me, there’s a crucial number of zero. That’s the number of Republicans that signaled they’ll cross party lines; you need 20 in the Senate.

“Until that becomes greater than zero. It seems like a foregone conclusion.”

This guy won’t be the Democratic nominee, he’s making too much sense.

He’s the only one making any sense at all!

notamemberofanyorganizedpolicital in reply to Walker Evans. | December 20, 2019 at 1:32 pm

Has the New York Times called him the White Oriental yet,
the way the labelled Hispanic George Zimmerman the White Hispanic?

Yang said: “To me, there’s a crucial number of zero. That’s the number of Republicans that signaled they’ll cross party lines; you need 20 in the Senate. “Until that becomes greater than zero. It seems like a foregone conclusion.”

I don’t read that as a positive as much as a negative. Yang points to republicans NOT voting for impeachment moreso than the dems voting against impeachment. If he was genuinely frustrated with the impeachment, you’d think he’d be disappointed more democrats didn’t cross the aisle and vote against it or show some conviction and stand up to call out Pelosi, Schiff, Nadler, et al. Instead, he cites the GOP for walking in lockstep over the democratic obsessment with impeachment? WTH?

He’s no different than the Dems – he’s just more back-handed in how he’s criticizing Republican conservatives.

Interesting that Mr. Yang ‘won’ the debate in the Drudge Poll. Perhaps it’s because he’s saying things like this?

Like the other Democrats Yang is a devout communist, which means he is a genocidal control freak. But he is smart enough to know that impeachment is going nowhere and will likely boomerang on Democrats. Yang, like Pelosi, longs to instead run a tried-and-true Worst Economy Since The Great Depression (TM) campaign by inventing economic catastrophe out of thin air.

notamemberofanyorganizedpolicital in reply to Recovering Lutheran. | December 20, 2019 at 1:35 pm

The DIM Party is years and years beyond which they have totally PURGED all but 100% “true believers” in their plot.

He pointed out that the more the Democrats act “like Donald Trump is the cause of all our problems, the more Americans lose trust that we can actually see what’s going on in our communities and solve those problems.”

Exactly. When I read the above, I thought “What problems is he talking about?” If Obama had had the same “problems,” Hillary might be president now.

The underlying “wrong” here is the idea that it is the job of the national government to solve “problems in the communities”. People who perceive problems in their communities should be hammering the LOCAL government critters to address the problems. Of course, one man’s problem is another man’s feature, and that is where you must start. Expecting Washington DC to solve problems in places none of them have heard of, let alone know anything about, is a fool’s errand.

notamemberofanyorganizedpolicital in reply to amatuerwrangler. | December 20, 2019 at 1:36 pm

We have got to get organized and get busy now
“Draining our Local Swamps!”

Now that is ying and Yang.