What was that about Democracy Dies in Darkness? 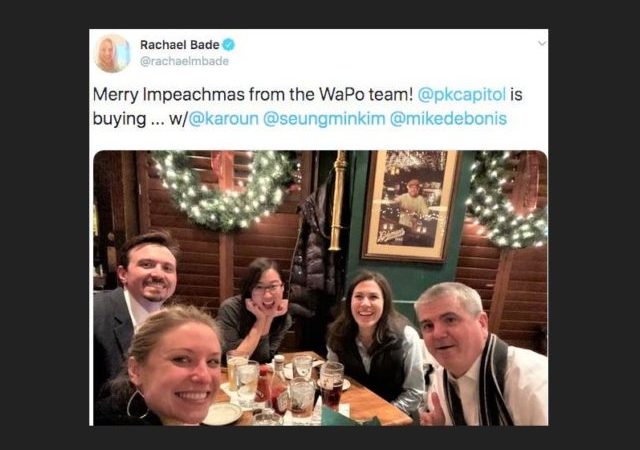 The Washington Post‘s Congressional reporter Rachael Bade deleted a tweet of her and other reporters at the paper, wishing everyone a Merry Impeachmas.

The reporters look happy and joyful as Congress debated and voted to impeach President Donald Trump. 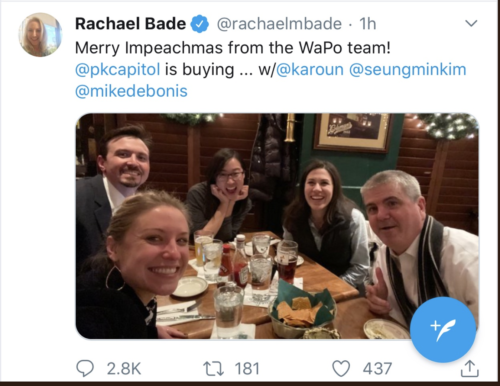 The reporters with Bade:

The tweet received a lot of criticism. I should have liked more of them on Twitter because I knew she would delete the tweet. But I caught one from a fellow journalist:

What the hell were you thinking when you tweeted this? Some of us still care about ethics and unbiased reporting, and this garbage makes it harder for all of us by reinforcing a stereotype. Come on guys.

Bade decided to delete the tweet…four hours after she posted it. Bade included an excuse, but people saw through her.

I’m deleting a tweeting tonight that is being misinterpreted by some as an endorsement of some kind. To be absolutely clear, we at the Post are merely glad we are getting a break for the holidays after a long 3 months. I will retweet the group photo w/ a better caption !

I think we all know what “Merry Impeachmas” meant but ok

Oh you mean the one of you celebrating The impeachment ? No need, we all know what partisan hacks you are

The moral of the story here is never tweet.

“This photo of me beating my wife is not what you think it is. I am sorry that you got the wrong impression, but it is just me and my wife unwinding for the holidays, not me actually punching her in the face and calling her a bitch. Your eyes are lying to you. Honest.”

Nothing like a bunch of your objective impartial just the facts Ma’am Washington Post reporters celebrating. Yup, I really will trust what these jerkos report from here on out.

notamemberofanyorganizedpolicital in reply to Comanche Voter. | December 19, 2019 at 1:01 pm

You can just tell they are totally “un-educated.”

Merry Impeachmas? Hah. Have a lump of coal!

Of course they’re undoubtedly Warmunists, so coal in the stocking is something they’ll really hate.

Pathetic. The Swamp is a bunch of losers desperately trying to hang on to their totally unearned and discredited prerogatives to rule and steal.

One other thing: When you look at the titles of these reporters, you realize they were right in the center of all the hoax and sham proceedings, but they never noticed or reported even one obvious suspicious thing. Their only semi-honorable defense is that they are hopelessly incompetent.

notamemberofanyorganizedpolicital in reply to Connivin Caniff. | December 19, 2019 at 1:03 pm

“Democracy Dies In Darkness – And We Are The Murder Weapon.”

“What the hell were you thinking when you tweeted this? Some of us still care about ethics and unbiased reporting, and this garbage makes it harder for all of us by reinforcing a stereotype. Come on guys.”

Bill Megulin must live in an alternate universe if he truly believes anyone still cares about “ethics and unbiased reporting.” That hasn’t existed since Watergate. Watergate was the beginning of the end of objective reporting.

Yet again the National Media just can’t show just a bit of restraint and not make a**es of themselves.

For years, Dennis Prager has been saying that truth is not a leftist value. Some people might think this incident proves him right.

I think he’s too optimistic. Sometimes, like here, it seems as if they prefer lies.

notamemberofanyorganizedpolicital in reply to irv. | December 19, 2019 at 1:00 pm

Lies are in every breath they take methinks……

Can we wish them a Pink Slip Xmas?

Just a party of Pravda journalists celebrating the pseudo-storming of the White House.

Members of the Future Coders of Amerika. Drink up.

Coding requires logic and an adherence to rules and form. They are capable of nothing more than gibberish, symbolically, monkeys with typewriters.

The cover ups almost always worse than the crime, you posted it, you own it

This Just In: They don’t care what you think.