Roby’s GOP colleagues went off on the paper for publishing a mom-shaming column about a Republican woman in Congress, noting the paper’s hypocrisy. 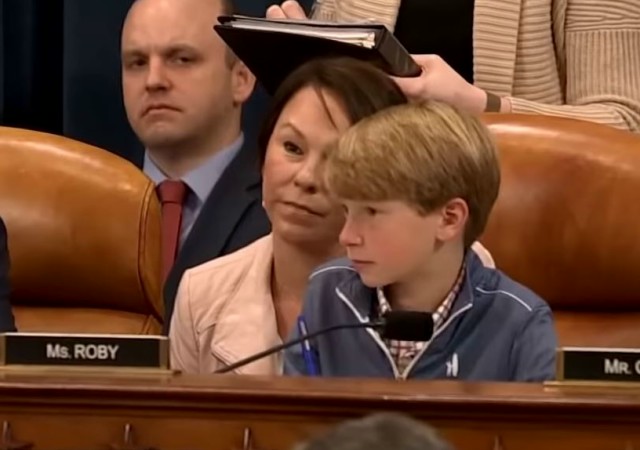 The column was written by Pulitzer Prize-winning author and fellow Alabamian Diane McWhorter, who said Roby bringing her son to the vote reminded her of the supposed death of “the South’s premium on personal decency” in the Trump era:

For this citizen, Southerner and mother, the crystallizing image of the impeachment season was the young son of Rep. Martha Roby (R-Ala), perched on her lap as she cast her Judiciary Committee vote Friday in support of President Trump. By presenting her son for the cameras, Roby sent two messages: (1) a vote to defend this president is a positive civics lesson for our children, and (2) Trump is a role model we should endorse for our growing boys.

Of all the dying things touched by this presidency, one of the more poignant for me is the South’s premium on personal decency. The gratuitous kindness routinely practiced by individual Southerners may have been compensation for gross societal evils (slavery and segregation), but it remained an outsize virtue in a low-self-esteem region and somehow helped rationalize America’s stubborn belief in its intrinsic goodness. Pondering the cold world that young Roby will shape as well as inherit took me back to an encounter I had several years ago with his grandfather, and the hard history it revisited and foretold.

After strongly insinuating she was not a fan of Roby’s father Joel Dubina, a former chief judge for the 11th Circuit Court of Appeals (after all, as she noted, he co-authored the 2011 ruling that declared Obamacare unconstitutional), McWhorter returned to insulting Roby, snidely suggesting that perhaps all hope was not lost for the Congresswoman nor her son:

…. Martha Roby has no apparent practical concerns to account for her tribal compliance — no matter what deviancy her party deems defensible. She is not running for reelection. And I still have enough faith in Southern decency to believe that Roby — who briefly unendorsed Trump in the wake of the “Access Hollywood” tape — doesn’t really want her son to grow up to be just like him.

And yet, she showcases the boy as her impeachment-vote partner, reminding us that this long civil war is a national inheritance. Trumpism’s next generation will carry on the fight — against the Parkland survivors or the teenager the president tweet-baited for earning the cover of Time.

One wonders if McWhorter, a civil rights historian for the state of Alabama, will ever understand the irony of her lamenting the supposed death of civility and southern grace in the age of Trump while at the same time shamelessly using a Republican Congresswoman’s 10-year-old son as a tool to attack her with?

Watch Inside Edition’s short segment on Roby and her son below:

Roby’s Republican colleagues went off on the Washington Post for publishing a mom-shaming column about a Republican woman in Congress, noting the paper’s hypocrisy:

This is an absolutely disgusting and despicable attack on @RepMarthaRoby for bringing her son to work- @washingtonpost should immediately apologize. They would NEVER write this about a Democrat woman. Martha is a hardworking Member & fabulous Mom! @hiattf https://t.co/AxD0NXn8Dd

This is despicable. @washingtonpost is attacking @RepMarthaRoby for bringing her 10 year old son to work. @hiattf you owe her an apology. Looking forward to all my colleagues, men and women, standing with Martha. @housegop @HouseDemocrats https://t.co/Hh6T1TMeEQ

Agreed. Pathetic attempt by the @washingtonpost to shame @RepMarthaRoby for being a mother and simultaneously fulfilling her duty as an elected member of Congress. The clear double standard of the left is on full display. https://t.co/OGKuToAxlT

This is a terrible piece. George Roby came for the Christmas Party, but his mom @RepMarthaRoby was working, so he decided to be with her. Celebrated if you’re a dem, attacked if Republican evidently https://t.co/uGM8wD4nc6

What a terrible column. “Let me slam a working mom and oh! – that reminds me of her dad who i don’t like either. Let me use this to also bring up racism in Alabama.” good grief. I thought we are supposed to support women/working mothers. Shameful. #standwithMartha @RepMarthaRoby https://t.co/9fQh5Nzuhz

What else would we expect from the Democrat Party owned Washington Post? The same DIMS that brought U.S. this.

“Destruction Of The Family: The U.S. Has The Highest Rate Of Children Living With A Single Parent In The Entire World”

alaskabob in reply to notamemberofanyorganizedpolicital. | December 18, 2019 at 7:11 pm

Uncle Sam, the non-judgmental rich “relative”, picks up the tab instead of the increasing number of casual sperm donors for this portion of society.

The WP just let’s any left wing nut at all write for the paper as if that were OK. Hatred, lies bizarre theories all OKas long it is left wing. A sort of see what sticks to the wall scandal sheet.

A Democrat talks about “decency”. How quaint.

notamemberofanyorganizedpolicital in reply to Toad-O. | December 18, 2019 at 6:30 pm

Something about “respecting the law and liking good sausage” something something “should never watch either being made”??

Can’t bring your son to work….especially at this very significant time of history? I guess only “daughters” of progressives can be allowed that.

If she cut his penis off, hopped him up on female hormones and dressed him up like a girl they’d think it was grand.

It would be sufficient that he liked boys. As if that transgender attribute is a source of fitness, let alone a cause for prideful exhibition.

I wonder how that WaPo harridan reacted to the Icelandic legislator who had a babysitting emergency and brought her infant and *nursed* it while speaking on the floor.

The premise here is off. McWhorter did not attack Roby for bringing her son to work. She attacked her for letting her son see her vote in a way McWhorter doesn’t like and considers shameful. Had Roby voted the “right” way, or had one of the Dems brought their kid to see them vote the “right” way, McWhorter would have been absolutely fine with it.

Calling a spade a spade, though this was a stunt, plain and simple.

Usually, it’s the Dems using kids and other untouchable figures for their public optics. I will say that I do enjoy the turnabout on the typical abusers and stuntmasters of this kind of foolishness. I just wish it had never become a thing.

Why do you think it was anything more than it looked like? The kid was there for the party, and wanted to spend some time with his mom. Why read more into it?

They just have to hate no matter what it is. If it has anything to do with Trump it causes them to seethe with ire and speak out to destroy what they see as an enemy.
A young boy is their enemy just like the red MAGA hatted boy in DC standing his ground in front of drum beating old Leftist.
They are all crazy!