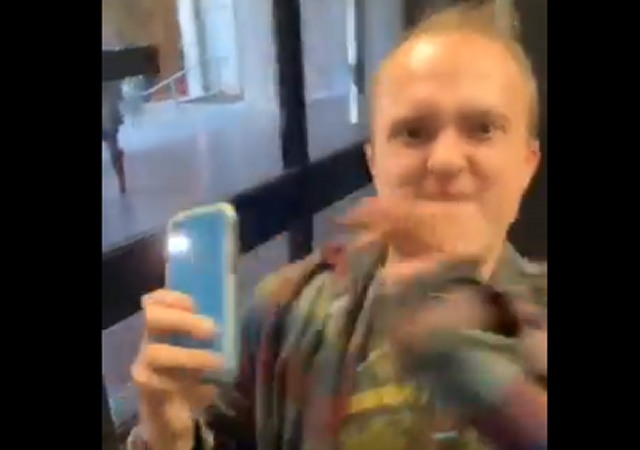 An argument on social media spilled over into real-life recently at Sacramento State University. A physical altercation followed and was captured on video which has since gone viral. The young man on the receiving end of the attack is the president of the College Republicans.

The apparent attacker has been identified by numerous news outlets as a student.

A video has emerged online of a Sacramento State student appearing to slap the former president of the College Republicans repeatedly on Friday — and police said they’re investigating.

Their scuffle was said to have originated with an online Facebook argument over a mutual friend’s anti-abortion post the previous day, the Sacramento Bee reported.

Keaton Hill allegedly commented on the post: “I hope that kid on your page dies of whatever cancer they have,” prompting a back-and-forth with Floyd Johnson II, the report said.

Their dispute carried into a Friday morning class where Hill allegedly hurled an expletive at the former president of the Sacramento State College Republicans, the Bee reported.

After class, Johnson and a friend confronted Hill, the report said. In a video recorded by Johnson, Hill appeared to slap Johnson before leaving the building.

Johnson’s friend could be seen restraining Hill, who shouted, “You’re going to end up f—ing dead!” He then broke free and appeared to slap Johnson’s phone out of his hand before walking away a second time.

The Sacramento Bee has more:

“I didn’t choose to fight back because I’m 6-foot-5 and he’s 5-foot-6 or 5-foot-7 or something. It really would have been unfair,” Johnson said by phone. “And anyway, the way he was hitting me was open-handed. If he was connecting and actually hurting me, then I would have engaged with him, but in that moment I was more focused on videoing the incident and recording what was going on.”

This deranged leftist and LGBT activist named Keaton Hill assaulted and threatened to kill @FJtheDeuce, a black conservative at Sacramento State. This is reportedly the 2nd time Keaton has violently attacked college Republicans at @sacstate. pic.twitter.com/7MtvF5IqCe

Update: Keaton Hill recorded this bizarre video addressed to me, calling me a bitch repeatedly and telling me to kiss his butthole. Very stable genius! pic.twitter.com/pxShKZYb4h

This is not the first incident involving these two students. The Sacramento Bee reports:

Hill and Johnson were also involved in an altercation last year at a College Republicans event in response to the Stephon Clark shooting. In a video, Hill tried to slap the person recording a video and called him a homophobic slur while Johnson attempted to restrain an incensed student.

The video is below:

How did this crazy fk ever get admitted to a college?

Wrong question. Try this… “How is it that he isn’t a member of the administration.”

So glad that I did not have a mouthful of coffee when I read that.

He can’t help himself, bless his heart. He’s balding and short, a combination sure to cause anger and acting out.

This is an enactment of that old joke about the guy going into a bar with a little p rick on his shoulder.

Ugly within, and, without.

So typical of today’s jackbooted, infantile, violent and totalitarian Dhimmi-crats.

I hate to say this, but Leftists don’t stand down until they take casualties. Think Kent State. The campus and the streets are theirs until the day comes they meet the right(wrong) people.

That woman who was saying, “calm down… it’s okay.” No, honey, it’s not okay. It’s not even remotely okay. Hill is just lucky he didn’t receive a well earned beat down. If he takes his act off campus, he may well find out what happens in the real world when you physically attack people.

Ok…I know I’m suppose to be outraged by the video, but actually…it’s pretty amusing…
(watch the other vid it’s funny too)

I do have a couple of question…
Do any of these kids EVER put down their phones..????

AND… What are the rules in One Handed Phone Fighting ?
Do they fight until one participant drops their phone ?
Do you then get to pick your phone and continue the bout ?
Or is the fight over…???

the little thug is a bully, who feels empowered to use violence with those of whom he does not agree politically.

Somebody needs Mommy to take him over her knee and get a little attitude adjustment.

My gaydar is pinging strong on the creep calling others a “fag”.

I’m sorry, but one slap at me and I might record it to use as evidence for my lawsuit. But two or three and there is no physical response! I grew up in a different era and if you did that to me, you would be in serious physical trouble. All of my inhibitions would have disappeared and you would have been looking at a fight or flight moment.

I have a friend to says frequently that one of the reasons that society has declined so is because loud mouthed ass hats aren’t doled out good old fashion country ass whippings like in the past.

It’s the Republican Party in a nutshell. Too nice to fight back.

The College Republican leader showed incredible restraint….he’s a better man than me. Back when I was in school, if some loser did that to me, they’d have a broken nose and a concussion before any bystanders would even have a chance to start pulling me off. Back then I was foolish and perceived I had little to lose.

Yep, shop teach use to let the fights go for a few minutes. There was a pair that use to fight almost everyday. I remember back it third grade, it was my turn to pick a fight with the new kid.

Yea, I sucked at fighting, but the new kid choke me which was a big no no at the time. I got lucky because we became good friends and he ended up being the best fighter in the school. I still rib him about choking me. It get his feathers ruffled.

Glad he did not get the best of me. His nose use to bleed with a light tap. When he got hit people would pull back because of the blood. It just pissed him off and he would start wailing on them.

Boy those were the good old days.

Sac State proves the US is decades ahead of China in pig-monkey hybrid development.

We’ve had the ManBearPig for a while now.

Bring on the lawsuits. It’s the only way.

He’s got a long history of this crap, yet is still free to wander the campus attacking republican students and calling them faggot-names (though the shoe sure seems to fit him!)

How come he’s not suspended, in court, serving time; is he a friend of Hillary or something?