Former Conservative Party chairman Eric Pickles: “BDS is antisemitic and should be treated as such.” 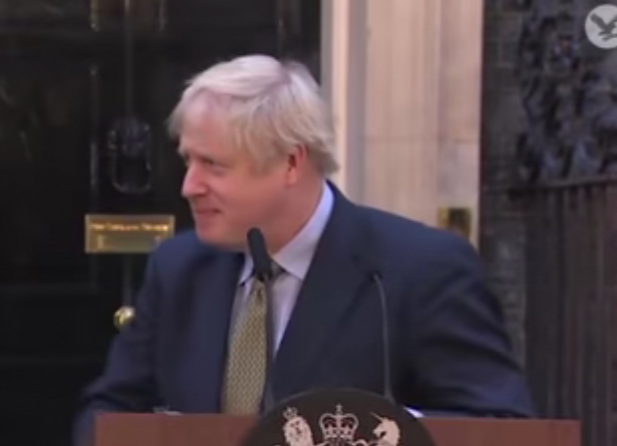 The proposed legislation will forbid public sector organizations from boycotting Israel, former chairman of the Conservative Party Eric Pickles said at a conference in Jerusalem. “BDS is antisemitic and should be treated as such,” Pickles added.

Prime Minister Johnson’s Conservatives scored a resounding victory over Jeremy Corbyn’s socialist Labour Party on Thursday, winning 364 of the 650 seats in the British Lower House. The comfortable majority of 74-seats paves the way for Brexit on 31 January and allows the Conservative Party to pass new laws in the parliament.

The proposed Conservative legislation comes at a time when anti-Israel activists aided by Labour party officials are strong-arming local city councils into boycotting Israeli companies. The law seeks to “ban public bodies from imposing their own direct or indirect boycotts, sanctions or disinvestment against a foreign country,” the British newspaper Daily Telegraph reported recently quoting a Conservative source.

The Jerusalem Post reported the remarks made by former Conservative Party chief:

The new Conservative government in the UK will pass a law making it illegal for public bodies to engage with BDS, UK Special Envoy for post-Holocaust issues Eric Pickles said at the International Institute for Strategic Dialogue’s conference in Jerusalem on Sunday.

“BDS is antisemitic and should be treated as such,” Pickles said, explaining that the new law will not allow public bodies to work with those who boycott, divest from or sanction Israel in any way.

Pickles, who is also the chairman of Conservative Friends of Israel, said that Labour’s historic defeat in last week’s general election in the UK showed that the British people reject antisemitism.

“Antisemitism an attack on the British way of life and British identity. Without our Jewish citizens we would be a lesser nation,” he said.

The anti-BDS legislation is a fulfillment of an election promise made by Prime Minister Johnson in the Conservative Party manifesto. The pledge was in opposition to the stance taken by his leftist rival Corbyn backing the anti-Israel campaign. “The pledge is designed to contrast the party with Jeremy Corbyn, who has said banning BDS by councils is an ‘attack on local democracy,'” Daily Telegraph reported mid-November.

Corbyn, who has long associated himself with far-left and Islamist groups, once referred to the jihadi terrorist organizations, Hamas and Hezbollah, as his ‘friends.’ Earlier this year, the Islamic terrorist group Hamas “saluted” the Labour Party chief for supporting their cause in a published statement. In what one can only describe as mutual love, Corbyn was, in turn, caught laying a wreath at the graves of Arab terrorists behind the killing of eleven Israel athletes at the 1972 Olympics, photographs published last year in the UK’s Daily Mail.

While Corbyn spent his political career associating with anti-Israel extremists and turning Labour Party into a refuge for antisemites, Johnson, as a young boy, volunteered in a Kibbutz in northern Israel. He has made no secret of his dislike of the anti-Israel boycott movement.

“I cannot think of anything more foolish than to say that you want to have any kind of divestment or sanctions or whatever or boycott against a country that, when all is said and done, is the only democracy in the region, is the only place that has, in my view, a pluralist, open society – you know, why boycott Israel?” he said during a 2015 visit to Israel when he served as the Mayor of London. He described the BDS agitators as “lefty academics who have no real standing in the matter.”

Johnson’s stunning victory and Corbyn’s decisive defeat will not end the anti-Israel campaign on the Left in Britain. Corbyn intends to remain the Labour Party chief for the foreseeable future. Under his watch, the Labour Party has seen an influx of Jew-hating agitators within its rank and file, making it institutionally antisemitic.

“[W]hen [Corbyn] became leader there was an influx of thousands of people to the Labour Party membership and, since this time, antisemitism has spread like a virus among Labour Party grassroots,” senior Labour politician Peter Mandelson admitted in a July 2019 interview.

Corbyn’s defeat, or his subsequent departure, will do little to drain the deep-seated antisemitism within the post-Corbyn Labour Party and parts of the British Left.

That’s great, now what about Brexit?

Brexit is indeed on top of my kind.

Here’s from my Friday’s post: “With comfortable majority now at hand, Johnson seems to be pushing to get Britain out of the EU on January 31. “Early indications suggest the Commons [British Lower House] will be asked to sit before Christmas, and the House of Lords [British Upper House] between Christmas and New Year, to get Brexit legislation through as soon as possible,” British newspaper The Telegraph confirmed as election results came out.”

Brexit morning, noon, and night until it happens. Boris won the second Brexit referendum in a landslide, and he can’t piss that away.

President Trump is a rookie politician. His appointments of Sessions, Wray, Tillerson and McMaster were disasters. It will take several terms to address the rot in the bureaucracy.

notamemberofanyorganizedpolicital in reply to Terence G. Gain. | December 17, 2019 at 11:17 am

It’s all according to A plan….

Rinos will not escape with their skins intact either.

Terence G. Gain in reply to notamemberofanyorganizedpolicital. | December 17, 2019 at 11:27 am

So throw in the towel. But then don’t complain.