Trump jokes that North Korea’s ‘Christmas gift’ may be a ‘beautiful vase.’ 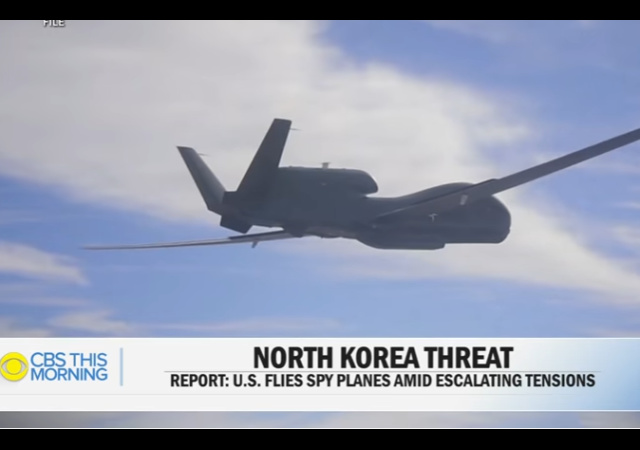 It is being reported that the US flew four surveillance planes over the Korean Peninsula, scanning for signs of the “Christmas gift” North Korean dictator Kim Jong Un hinted he would send this year.

The four American aircraft — an RC-135W Rivet Joint, an E-8C, an RQ-4 Global Hawk and an RC-135S Cobra Ball — were believed to have carried out missions near the peninsula between Tuesday and early Wednesday, South Korea’s Yonhap News Agency reported Wednesday, citing Aircraft Spots.

President Donald Trump, on the other hand, seemed nonplussed by the seeming threat and joked about other gift possibilities.

Trump, speaking to reporters after finishing a Christmas Eve video call with U.S. troops from his Palm Beach club, Mar-a-Lago, joked about the nuclear-armed dictatorship’s rhetoric even with the threat of a long-range missile test looming over the apparent tensions between Washington and Pyongyang.

“We’ll see what happens,” Trump said when asked what he would do if North Korean leader Kim Jong Un does decide to test a new long-range projectile.

Tyler Durden of Zerohedge reported that a Japanese news agency had erroneously reported that North Korea had launched the seemingly promised Christmas missile, but later admitted it was #FakeNews. However, in reality, the Japanese are taking the North Korean threats seriously.

Japan’s Self-Defense Forces will have two Aegis-equipped ships conducting surveillance in the Sea of Japan and East China Sea, anticipating missile tests by North Korea around the new year.

The Japanese government, which made the decision on Friday, is believed to have deployed one such vessel in November. The U.S.-developed Aegis system uses radar to track and intercept missiles.

Pyongyang has unilaterally set a year-end deadline for nuclear talks with the U.S., suggesting that it would resume testing of ICBMs if no sanction-ending agreement could be reached.

If on the off-chance another Trump-Kim summit does occur I wouldn’t be surprised if the North Korean leader gifted the President a vase. And that is as close as I will come to making any prediction about the status of US and North Korean relations in 2020.

The Iranians shot down a RQ4. A $135M dollar item. (no doubt inflated by the military industrial complex. The likely value is $10, given parts estimating). That is as much as F-22, or 10 F-16 ew upgrades which are desperately needed but are caught in procurement (procurement in military speak is a complex time consuming process whereby the contractor announces that the upgrades or product promised really does not exist yet and a bit of money and time are needed to complete the task. After a year or so and another budgetary request, the unit cost suddenly goes up by a factor of another 10. This will include bonuses of the Board of Directors, a travel and leisure package for military and civilian personnel, and very large bribes in the form of job promises by contractors and subcontractors to military personnel, measured in the dozens. None of this money will actually be used to make a weapon. Which will be obvious when the first 2 prototypes fail miserably).

Xi Jinping would be the man ordering any missile launch from North Korea, not Kim Jong-Un. Or, has Putin displaced Xi Jinping?

We should have given them a preemptive Xmas present.

I no longer watch the democrat news.

notamemberofanyorganizedpolicital in reply to TheFineReport.com. | December 28, 2019 at 3:25 pm

It wouldn’t surprise me a bit for them to give Trump a vase. The Norks can be surprisingly obscure. And the odd part of it is, it would make perfect sense for Korea to stop their nuke bomb program. They certainly can’t *use* any of them without being pounded into dust, and their practice program has shown they are able to make them. Still, that’s one head I’m not climbing into.