Tulsi Gabbard Skipping Next Dem Debate, Even if She Qualifies

Tulsi Gabbard Skipping Next Dem Debate, Even if She Qualifies

“I instead choose to spend that precious time directly meeting with and hearing from the people of New Hampshire and South Carolina.” 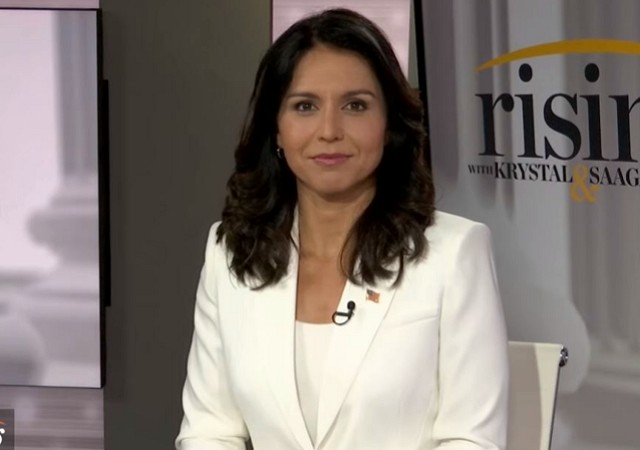 Congresswoman Tulsi Gabbard is saying that she will not take part in the next Democratic primary debate on December 19th, even if she qualifies according to DNC rules. It’s difficult to know exactly why she is doing this.

Is it possible that she feels her work is done now that Kamala Harris has dropped out of the race?

Rep. Tulsi Gabbard, D-Hawaii, announced late Monday that she won’t be attending the Democrats’ next debate “regardless” of whether she qualifies.

Gabbard, who previously flirted with the idea of skipping an earlier debate, appeared more assertive about bowing out of the upcoming debate being hosted by PBS and Politico on Dec. 19.

“For a number of reasons, I have decided not to attend the December 19th ‘debate’ — regardless of whether or not there are qualifying polls,” Gabbard tweeted. “I instead choose to spend that precious time directly meeting with and hearing from the people of New Hampshire and South Carolina.”

Gabbard had met the donor requirement to qualify for the December debate but had yet to meet a requirement that she earn 4-percent support in at least four national or early-state polls approved by the Democratic National Committee [DNC] — or hit 6 percent in two approved early-state polls. The cutoff date: Dec. 12.

For a number of reasons, I have decided not to attend the December 19th “debate” — regardless of whether or not there are qualifying polls. I instead choose to spend that precious time directly meeting with and hearing from the people of New Hampshire and South Carolina.

Amy Russo of the HuffPost has more:

To be invited, candidates must have 200,000 unique donor contributions, and meet one of two polling requirements ― four polls at a minimum of 4% in national surveys or in the early nominating states of Iowa, New Hampshire, Nevada and South Carolina, or two polls at a minimum of 6% in those states.

Gabbard has enough donors, but is still in need of one more poll in either category. The deadline is Thursday.

The congresswoman’s apparent skepticism of the debate is par for the course as she has repeatedly complained about the electoral process, claiming it is rigged against her campaign. In October, she threatened to skip the fourth debate, criticizing the use of “polling and other arbitrary methods” as qualifying measures while accusing “corporate media” of attempting to “hijack” the 2020 election. Reversing course, she decided to show up at the debate days later.

YouTuber Tim Pool has been an outspoken supporter of Gabbard and offered this explanation on Twitter:

You want to know why this is the right move?

The ratings on the last debate were abysmal

Tulsi could get way more views going on a series of podcasts instead of this. https://t.co/NVpRHmCHwZ

The “debates” aren’t, really. They’re more announcements of “Hey I’m here, vote for me.” They give the newer candidates national exposure without them actually having to go out and do anything newsworthy.

I think she’s angling to be somebody’s VP pick. Doomberg??

Darn, I thought she would want to go back to Hawaii to talk about the issues with her constituents, who are the ones that sent her to Congress in the first place.

Sociologist Erving Goffman said that the speaker who says he’s tearing up his prepared speech in order to speak to you directly, has torn up the wrong speech.

I have to agree with Mr. Pool: The ratings for the last one were a joke at best. She’s probably getting more exposure and coverage saying she’s got better things to do than participating in the “Let’s see how far Left we can go” so-called debate.

She’s too far left for me, but I must admit I like her style and her willingness to poke her party in the eye every now and then. She also comes across as the least insane among them all.

The debates have low ratings for a few reasons. They are controlled so much by the moderators that they become more about who asked whom what & who was given more time than whom, i.e., about the moderators. One illustration is how significant the composition of that group is considered. The self-absorbed media don’t realize or don’t case about silly questions submitted on Facebook by clueless viewrs. For viewers who care about particular issues, all you are going to get is the candidates’ canned views without any serious follow-up. It’s usually a he-said-she-said except where pne candidate deviates from the media’s orthodoxies, and the the media overstep their bounds.

I’m going to increase my name id by not participating in a broadcast event. GENIUS!!!!

I’m betting she doesn’t qualify for the debate, she is setting up an escape plan, wouldn’t want to go down with the ship…

So the ratings for the group therapy sessions of the Soviet Central Committee are not boffo? Wow. Who wudda thunk it?

Her participation in these boring commercials (otherwise known as “debates”) has not propelled her into the level of being a serious contender. The ratings of these get togethers are minimal anyway.
She probably feels there is relatively little upside to her participation in these debates until and unless the number shrinks to a handful of participants.
This is a bit of a “Hail Mary” pass on her part. She may be counting on raising her profile by publicly ignoring these snooze-fest “debates”.
Look for her to have some sort of highly visible campaign event during the actual debate.

One thing everybody seems to be missing.. She is being packaged as a moderate. When she opens her mouth it’s clear she is a far left progressive. The LESS they have her on a national stage the better get chances are. So.. Sit out the debate.

It is obvious she is going to be a 3rd party candidate. So is it still possible for Clinton to jump in? That’s how Bill won using Ross Perot. I fell for it. Tulsi will pull the voters who will NOT vote for Clinton away from Trump. Same for the Never Trumpers. Smart move.

Fascinating strategy. Rather than blending into the Democrat crazies and their malaise, she’s doing something much more positive. It would be interesting to see if she does this for the rest of the debates. I disagree with her on 99% of the issues, but she’s intelligent, compelling, articulate, fast on her feet, and actually has a genuine smile. She doesn’t look like she hates everybody, like the rest of the candidates.

She has no chance and knows it. Simple.

She might have an opportunity to be selected as a VP, think Biden. Harris damaged Biden, and Tulsi took Harris out. I don’t think this was an accident.

Yep. A stunt will get you the traction you’re looking for.

How about juggling while on a unicycle? Or spinning plates on poles. Always a crowd pleaser.