Trump: “We will begin negotiations on the Phase Two Deal immediately, rather than waiting until after the 2020 Election.” 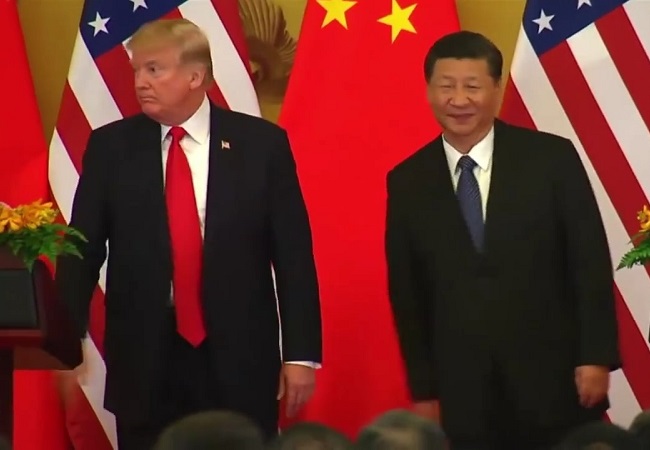 The U.S. and China have reached a limited deal to pause the trade war and remove the threat of new tariffs.

China has agreed to purchase “American farm goods and other products.”

As part of the “phase one” deal, the U.S. canceled plans to impose fresh tariffs on $156 billion in annual imports of Chinese-made goods—including smartphones, toys and consumer electronics—that were set to go into effect Sunday. The U.S. will also slash the tariff rate in half on roughly $120 billion of goods, to 7.5% from 15%.

Tariffs of 25% would remain on roughly $250 billion in Chinese goods, including machinery, electronics and furniture.

Chinese officials said the U.S. has agreed to reduce these tariffs in stages, but U.S. Trade Representative Robert Lighthizer said there was no agreement on that, and he suggested China believes such reductions can be negotiated in subsequent phases.

We have agreed to a very large Phase One Deal with China. They have agreed to many structural changes and massive purchases of Agricultural Product, Energy, and Manufactured Goods, plus much more. The 25% Tariffs will remain as is, with 7 1/2% put on much of the remainder….

…..The Penalty Tariffs set for December 15th will not be charged because of the fact that we made the deal. We will begin negotiations on the Phase Two Deal immediately, rather than waiting until after the 2020 Election. This is an amazing deal for all. Thank you!

While it may not seem like much, people have embraced the agreement:

The Business Roundtable called the announcement a “positive step” and urged both sides to “continue progress toward additional structural reforms in China and tariff relief.”

“For farmers, this could either be the first ray of hope or another empty promise,” Brian Kuehl, co-executive director of the free-trade organization Farmers for Free Trade, said in a statement. “Farmers want sustained access to China’s market, not one-time purchases, so it will be critical to see how the retaliatory tariffs that have crippled farm exports are treated in this agreement.”

“While any progress is encouraging, this cannot be Phase One and done. The last thing the U.S. and China should do now is step away from the negotiating table or let this go into deep freeze through 2020. Farmers are looking for an end to the trade war, not a pause,” Kuehl added.

With everything else that’s going on, I just don’t know how he does it.

If we are talking about pig farmers, China will have no choice. They’ve killed off all of their own by failing to control conditions and allowing for the spread of “pig ebola”.

Well, one could argue that killing off all their swine IS controlling conditions and preventing the spread of “pig ebola.”

But yeah, they need our pigs. Bigly.

When will The View move to China?

The progs will do everything in their power to crater the US economy before the election next year. Trump is holding the China deal as his Trump Card, to be played at the right time to goose things back in line after the progs have played their hand. Don’t expect a final deal until then.

“Brian Kuehl, co-executive director of the free-trade organization Farmers for Free Trade…… retaliatory tariffs that have crippled farm exports ”
****
“Farmers for Free trade” sure has the stink of Globalist/COC/GOPe Astro-turf.

Farmers have attempted to close their own markets whenever they could. Pork from Asia is already off the table. Fruit from Asia? Not through any West Coast port. Avacadoes from Hawaii…forbidden. On and on.

China has promised this before and instantly reneged.

And they will again. The entire negotiating team knows this.

The goal is not a “deal”. The goal is to remove China from our economy entirely. It’s rather easy to see.

I don’t have a lot of sympathy for the corporate big AG shills. They do everything they can to create an uncompetitive market in the U.S.

The actual goal here is to initially isolate China’s economy and then they can accept that they can’t steal IP, maintain state subsidized entities, wall off sectors of their economy from competition etc

Once that occurs and we just got closer, then the true deal begins. Personally I suspect that eventual implementation of USMCA and hopefully a bilateral agreement with post Brexit UK will need to be in place and functional for the more hard line Chinese to accept the fact that they will have to play by the new rules. They could attempt to pivot to the EU but since EU is also an export driven economy I don’t see how that works.

You got it Chief