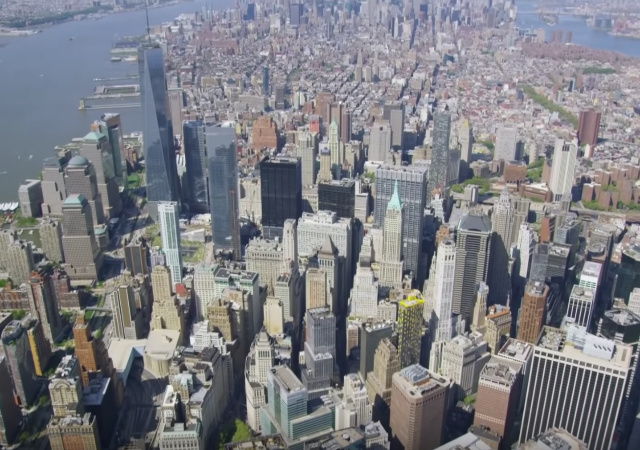 A Business Insider survey found that people consider New York City as the rudest city in the United States of America.

Weird thing is, I kid you not, I am watching Ghostbusters II and I’m at the scene where they are discussing the slime under the city with the mayor.

Venkman explains to the mayor that everyone in the city is miserable, which could cause the slime to explode.

The Ghostbusters try to convince the mayor to do something. He asks them if they expect him to go on TV and tell 10 million people to be nice to each other.

He concludes: “Being miserable and treating other people like dirt is every New Yorker’s God-given right.”

I’ve seen a few New York City publications excuse the rudeness because the citizen “spend life jammed against 9 million of their neighbors, are notoriously short on patience for show walkers, tourists and people who wear big backpacks on the subway.”

“My favorite quote on the topic comes from that somewhat fussy Massachusetts statesman — and eventual president of the United States — John Adams,” Mr. Miscione said by e-mail. He referred to Adams’s entry in his diary for Tuesday, Aug. 23, 1774, not long before the Revolution:

“With all the opulence and splendor of this city, there is very little good breeding to be found. We have been treated with an assiduous respect but I have not seen one real gentleman, one well-bred man, since I came to town. At their entertainments there is no conversation that is agreeable; there is no modesty, no attention to one another. They talk very loud, very fast and altogether. If they ask you a question, before you can utter three words of your answer they will break out upon you again and talk away.”

Grass is green, the sky is blue… a survey once again proves something we already knew!

Roses are red, and violets are blue;
A poll proves something we already knew.

I am a New Yorker born and bred (didn’t escape ’til the Dinkins era). I was taught from an early age to give up my subway seat to an elderly person (everybody was wlderly to me at that time), to stand back from elevator and subway doors to allow people to exit first, to walk in corridors on the right and to overtake slow walkers and gawkers on the right.
Yes, there are parentless thugs with boomboxes (chips) on their shoulders just spoiling for a fight and there are mid-westerners trying to make it big in “Duh City” but those, while numerous, are not the norm.
Ask a (native-)born New Yorker how to get somewhere, and, even if they’re in a rush, they’ll likely take you (at least halfway) there.
New Yorkers, having to rub shoulders every day with their neighbors, are, by their very nature, polite.

I think it is more like NYC being similar to big ant hills or bee hives. I do not like crowds, crowded pretty much sums up NYC. I had business in NYC from time to time, I escaped as soon as I could.

I, a Southerner from birth, have been to NYC several times and through the airports uncountable times.

While I think it true that big city citizens are a bit more “hurried” than their small town counterparts, I’ve never encountered a rude person in NYC.

Keyword: rudest, as in statistically biased. I wonder if is the result of the sardine or crabs in a bucket effect. Then there are the good, the considerate, the helpful, even gay people. In the spirit of Christmases past and present, and Jesus’s message, life, and sacrifice. Merry Christmas!

Damn Yankees! I lived in Boston for some time, though, and they give New Yorkers a run for their money. Plus, the drivers in Boston are terrible, and the streets were originally laid out to follow cow paths.

Boston’s worse. You aren’t a native unless your family has been there for 4 generations. And who wants that Boston weather for any generations let alone one generation after another?

Here in Indiana, when deeply insulted, a common reply is to say, “Go to New York!!”

The place has to be a civil engineers nightmare. How do they handle the quantity of human waste from even one day?

Plumbing and freshwater systems over 100 years old. Yes it’s a maintenance nightmare, but they generally do OK with it. Not sure if there are lead pipes delivering fresh water within the city.

Adequately today, and then suddenly not.

short on patience for show walkers

The article says “slow walkers”; good thing too, as that actually makes some sense.

No, people allow for slow walkers, but they hurry around them. Don’t take it personally. In some cities they’ll be rude to them, in NYC they just accommodate and move on.

Maybe it would help the MSM to understand why we tolerate so much boorish behavior from President Trump… We just write a lot of it off because, after all, he’s from New York.

In most major cities I’ve visited, if I ask for directions to somewhere, I risk being given wrong directions. Sometimes they’ll try to help, sometimes they’ll not know but pretend they do, and sometimes I am sure they have just tried to steer me wrong.

In NYC, it’s brief, it’s abrupt, but the information is always honest, always correct as far as I can remember, and if they don’t know they’ll say they don’t know.

NYC is the friendliest big city I’ve been in.

I have been just about everywhere in this country, including to NYC more times than I can count when I lived back East and did business there. I have to disagree with the common perception.

In fact, I think Manhattan is one of the friendlier and more civilized places in the United States. I attribute it to the nutcase issue. There are enough babblers and whackos that, if you’re normally dressed and aren’t twitching or drooling, you’re likely to be treated pretty well because people will appreciate that you’re a member of the Brotherhood of the Civilized.

In places like Boston, where I lived for 11 years, the general level is (or at least was) higher, so they tend to feel freer to treat each other and strangers like crap. Speaking of which, now that S.F. is descending into the crap, I wonder if they’ve become friendlier to civilized strangers because there are so many weirdos that civility is more appreciated now.

A better description is forthright and honest. I like forthright.

For example, his sh!t hole description of Africa, Middle east and much of Latin America is honest and forthright. Making fun of Kim was the same.

Deading Hillary’s deplorables around one tweet at a time is based on being forthright and honest about the nature of those deplorables.

I teach ESOL students in high school, so when I asked them what their old countries were famous for, the Central America kids all said, “problems”.

I think NYC gets a bum rap over its supposed rudeness. My native Washington DC is at least as bad, if not worse.

What I don’t understand is how Philadelphia didn’t make the list. That’s the most obnoxious bunch of people on the East Coast.

I lived there for 33 years. Believe me, it’s very rude. Worst in US

I spent two-three months a year in DC for over two decades. The culture stinks. I cannot count how many times someone claimed it was about who you know, that may give access, but far too many of those people did not understand it was just as important to deliver fair value, to actually work to do so. The Beltway is full of dishonest grifters. Trump is dead on about the swamp.

New Yorkers are gruff, but they are honest for the most part. I think that comes from their being grounded by deep family and cultural ties in the region.

On the other hand, they vote for idiots like de blasio and cuomo. If you were that self-destructive, you’d be gruff too.

It is, of course, purely a coincidence that the rudest cities are Democrat polities for generations.

Gluttons for punishment are not happy people.

On the other hand, awhile back there was a study done involving a lot of major cities in which a person would drop a bag of groceries on the ground to see the reaction of the people nearby. The New Yorkers were the nicest people and we came out of this survey number one. I for one was not surprised because although New Yorkers may be hurried we are always helpful, especially to tourists. So I am convinced that is present opinion poll is baloney.

I think you’re right Gersh. I used the term “hurried” in my comment up near the top.

I found the native New Yorkers always kind to me when I asked directions, etc. On one trip where I had a day to spend between flights I decided to walk around Manhattan. Typical smallish town Southerner, when I asked directions everyone was polite, and a couple of people actually went in the wrong direction to walk with me a block or two to point something out.

lived in the city for a summer quite a while back–an amazing place–could not wrap my mind around the fact that there were about 2k people living in the SAME BUILDING–would warp my attitude towards others a bit, too–overall, friendly, passionate, intense–liked them a lot but not the place for me

boston is my favourite city on the east coast–steeped in history, tradition, ritual–with their own particular dialect of english and a tremendous sense of honor and humor