Schiff Confirms Impeachment of Trump is All About 2020

Schiff Confirms Impeachment of Trump is All About 2020

“The President’s misconduct goes to the heart of whether we can conduct a free and fair election in 2020.” 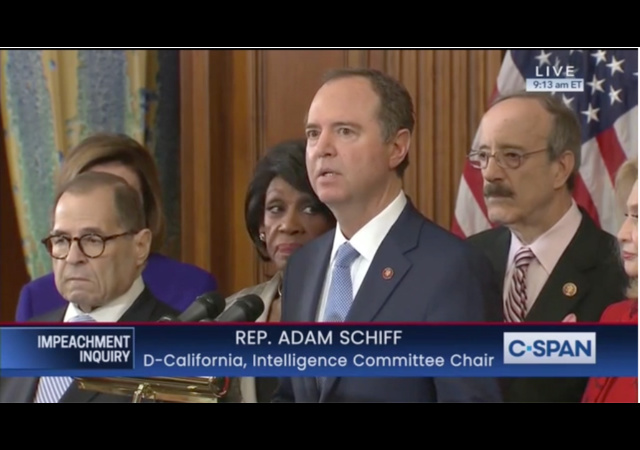 House Intelligence Committee Chairman Adam Schiff confirmed the impeachment against President Donald Trump is all about the 2020 election.

“The argument ‘Why don’t you just wait?’ amounts to this. Why don’t you just let him cheat in one more election? Why not let him cheat just one more time? Why not let him have foreign help just one more time? That is what that argument amounts to. The President’s misconduct goes to the heart of whether we can conduct a free and fair election in 2020. It is bad enough for a candidate to invite foreign interference in our political process, but it is far more corrosive for a president to do so and to abuse his power to make it so. Despite everything we have uncovered, the President’s misconduct continues to this day, unapologetically and right now. As we saw, when he stood on the White House lawn and he was asked, ‘What did you want in that July 25th call?’ and he said the answer was ‘a simple one.’ And not just a simple one on July 25th, but a simple one today, and that is he still wants Ukraine to interfere in our election to help his campaign. Even this week, the President’s lawyer was back in Ukraine seeking to review the same debunked conspiracy theory promoted at the President’s behest. Which gets to the final and most defiant and pernicious of the arguments that we have heard in the President’s defense — that the president can do whatever he wants under Article II, including get foreigners involved in our elections and we should just, to quote the president’s Chief of Staff, ‘Get over it.’ Ben Franklin said we have a republic if we can keep it. The president and his men say, ‘You can’t keep it, and Americans should just get over it.’ Americans don’t get to decide American elections anymore, not by themselves, not without foreign help. For the members of Congress, this is not a question of fact because the facts are not seriously contested. It is rather a questions of duty.”

VIDEO – Adam Schiff: We Can’t Conduct a Free and Fair Election in 2020 Unless We Impeach Trump https://t.co/rHfJ0IXdbb

People on the right saw right past Schiff:

There you have it, it’s all about 2020 and Democrats’ fear they will lose again https://t.co/LgVEuXT8aq

Confirmed by Democrat House leadership: Impeachment is about 2020

They have no case for impeachment. No bribery. No quid pro quo. No abuse of power.

The facts aren’t on their side. This is a pathetic political mission to try to rig 2020 against @realDonaldTrump.

Just a reminder: impeachment isn’t about protecting the Constitution. Democrats don’t give a shit about it. It has always, always, ALWAYS been about politics and the 2020 election https://t.co/9RoCIlMN9v

Since drafting Articles of Impeachment I would have to say this is the most honest I have ever seen the Democrats at a press conference. They openly admit they can’t beat Trump in 2020.

The Democrats believe that the 2020 election is too important to be left to the voters.https://t.co/1aFeyhlIXj

Once again the Dems prove the old saying about politics being “show business for ugly people”.

notamemberofanyorganizedpolicital in reply to snopercod. | December 10, 2019 at 11:16 am

#OIG report reminds us how spookily accurate John LeCarre is about the world of spooks:

Trump Surging in Polls in Three Battleground States, as Impeachment Seems to be Damaging Biden and the Democrats — Ace of Spades

Not sure who the woman in red is, but you would have to go a long way to find 3 uglier women than those 3.

Except he didn’t cheat the first time…even Mueller exonerated him for that.

This is just a partisan hack backup plan to try again (and fail again).

What concerns Democrats is their ability to rig elections is slipping. They know the effectiveness of their victimhood politics is waning. They know they can’t beat Trump in a fair election. They know a Trump win in 2020 will likely give him two more USSC picks and a significant number of additional federal judgeships. They see a bleak future. No wonder they’re suicidal.

Remember: to the Derp State, “cheating” is defined as “defeating a Mandarinate-approved candidate.”

It’s now up to the Gang of McConnell/Graham. Reject the Articles of Impeachment with prejudice and send them back to the House with a scathing lecture. Once the Senate accepts them, even if they to be dismissed quickly, the RINOs will have again delivered a victory to the Dems by allowing them to smear Trump’s historical legacy as an impeached President.

Republicans have not changed one iota. Let’s not forget that once the tide turns and Trump and his patriots prevail. Drain the Swamp!

This is the Dems’ Hail Mary pass. Their stable of candidates is so weak, their entire platform no matter who wins will be, “I don’t care how good the economy is and how low the unemployment is, Trump is the so bad he was impeached by the people’s representatives.”

For the members of Congress, this is not a question of fact because the facts are not seriously contested.

I love the smell of delusion in the morning!

The Congress has been a do-nothing congress, so how could Trump obstruct stasis?

Pelosi’s Do Nothing DEM Congress
and next
Pelosi’s Government Shut Down.

Rep Al Green was correct: “If we don’t impeach Trump, he will be re-elected!”

It seems like they made the offenses so weak on purpose.
.
Obstruction of Congress is not the same as Obstruction of Justice. I’m not sure it’s really a thing??? The Dems intentionally avoided an all our fully authorized impeachment vote and inquiry which would have given their subpoenas Judicial authority. As it was, compliance with Schiff’s subpoenas was totally voluntary. That’s why only Trump-haters appeared. Deciding not to appear is a lot different than defying a court order and refusing to appear at the risk of jail time.
.
As for the phone call. Trump clearly asked for a favor in the form of looking into Cloud Strikes involvement in the 2016 DNC hacking investigation. Much later Biden’s name was brought up three times. Hunter Biden actually. Joe’s name has been inferred by the Dems and their compliant media partners. Either way, it was not part of the favor no matter how hard the Dems want to connect two words separated by 582 other words.
.
By making the articles so weak, the Dems get their political talking point and the Senate hearings end quickly so that their superstars can get back to campaigning. No sense drawing out the inevitable.

So when do we move on to “if Republicans are allowed to run for office, how can we ever have free and fair elections”? Schiff needs to be careful, his totalitarian face is showing.

notamemberofanyorganizedpolicital in reply to snopercod. | December 10, 2019 at 11:18 am

Cancel out all RINOS and he’s talking about U.S…….

“if Republicans are allowed to VOTE, how can we ever have free and fair elections”

Impeachment is as much about Democrats’ efforts to appease their genocidal base as it is to rig the 2020 elections in their favor.

Impeachment is also insurance in case RBG kicks the bucket in the next 11 months. You just know the dems will scream about an impeached president choosing a successor.

notamemberofanyorganizedpolicital in reply to snopercod. | December 10, 2019 at 11:17 am

How many years has the real Ruthie been buried now?
I forget.

The easiest rebuttal to that would be for VP Pence to announce that he would nominate the same candidate. The Dems don’t have time to put together a case for impeaching him too. Everybody knows the guy is as squeaky clean as they come.

Seems like with cat outa bag or cards on table or any other pertinent cliche repubs Trump Joe Jo Blow should take a hard look at what they are dealing with. Seems like the squad the dem committee chairmen lawyers witnesses, and the makeup of the dem side of the committee members would be good place to start. This may make people uncomfortable.

But if you like your car house vacation health care and heat in winter air in summer it’s past time to get real. Just saying.

The damage that Hillary Clinton (and her willing apparatchiks in Congress) have done to our nation is incalculable. Her squealing when she blew an election–“the Russkis did it”–continues to damage our electoral system.

Richard Nixon’s reaction when Papa Joe Kennedy bought all the graveyard votes in Chicago—three times–to put JFK in the Oval Office was an act of statesmanship. He knew he’d been robbed–but preservation of the country’s faith in the electoral system was more important than his personal career. Al Gore couldn’t shine Nixon’s shoes–and as for Hillary, Schiff, Pelosi, Schumer, Nadler and the rest of the scumbags, they are beneath contempt.

Hear hear! Nixon wasn’t perfect, but he deserves more respect than he is usually given.

notamemberofanyorganizedpolicital in reply to Comanche Voter. | December 10, 2019 at 1:17 pm

Kennedy’s stole West Virginia in the 1960 DEM primary and
then stole the 1960 general election in the Ill state by using Mafia thugs forcefully changing ballots in Chicago.

Joe Biden’s role in getting an investigation shut down in Ukraine during the Obama admin was a direct violation of the Treaty between Russia, Ukraine and USA. USA was not permitted to interfere with Ukrainian government actions. The Obama admin influence in kicking out a Russian leaning admin was also that. Amazing how reality gets lost in the fog of war.

It’s all about money….and that is the huge underlying issue Trump was going after. The Swamp dems were skimming big bucks from USA monetary support of Ukraine after getting rid of Russian friendly prez.

Every time I see these Dems in a group picture, I imagine A.F. Branco doing back flips and going “woohoo!!!” at all of these cartoon characters. Has there ever been so many easily caricatured people available to make fun of? This is even richer than at Clinton’s SOTU when his cabinet of dwarfs would precede his entrance. There is no feeling sorry for these people. They’ve earned the scorn and ridicule heading their way.

I don’t think Dems understand what “free and fair elections” means. They seem to think, for example, that letting illegal immigrants vote is “fair”. I’ll bet Pres. Trump’s attempts to stem the flow of illegal immigrants that they’ve encouraged is one of the things they have in mind when they accuse him of obstructing Congress and endangering our democracy.

(Who do you think is the “we” when they talk about “our” democracy?)

They also think it’s “fair” when their pals in the tech industry censor anything expressing views contrary to the party line — including ads by the President’s own campaign!

Oh, and one more thing. If they’re so concerned about protecting the integrity of our elections, why are they so vehemently opposed to Voter ID laws?!?

For the first time in my life, the Democrats are actually being transparent in their actions. This is all just setting the stage for more claims of “Trump is an illegitimate President” after he’s re-elected.

“Schiff Confirms Impeachment of Trump is All About 2020”

Even Leftard morons can figure out that is the only reason .