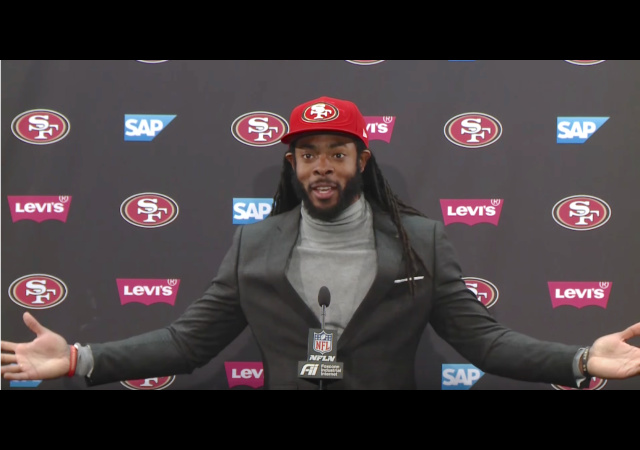 San Francisco 49ers star Richard Sherman is known for lending a helping hand to those in need.

He has done it again.  Sherman gave $7,491.27 to Cabrillo Middle School in Santa Clara, CA, and $20,000 to the Tacoma Public Schools in Tacoma, WA, to pay off school lunch debts. He also used to play for the Seattle Seahawks.

Thing is, no one would know about Sherman’s donations if the schools did not say anything.

On Saturday, November 23rd, 49ers Cornerback Richard Sherman pulled me from my shift as a docent in the 49ers Museum to give me a personal check for $7,491.27 to cover Cabrillo Middle School’s cafeteria debt.

Richard’s gesture created such good will for the 49ers that they went on to sack Aaron Roger’s and the Green Bay Packers the next day on national tv by a score of 37-8.

Officials with school district posted on Facebook, thanking Sherman and his foundation for the donation and “clearing all students’ lunch debt so that they have one less worry in their lives.”

“The district is thankful to the Richard Sherman Family Foundation for this kind donation,” district officials said in a statement. “It means that many Cabrillo families will have less debt over the holiday season.”

Sherman has helped people with his Blanket Coverage, the Richard Sherman Family Foundation. It has given clothes, school supplies, and other necessities to low-income families.

The foundation told the school district that helping schools to eliminate student lunch debt is one of the best ways to help students succeed. It means the students can scratch off the worry about paying for breakfast and lunch at school.

Last month Sherman donated $5,000 to one youth football team in California when he found out the families did not “have enough money to cover the cost to travel” to nationals.

It is nice to see a positive story about a football player being generous.

Sherman is not a poser like some players. I admire him both on and off the field.

That one act is worth more to improve people’s lives than everything Colin K. has done in his activist career.

Pumpernickel is merely his crazy girlfriend’s bitch. He’s a brainless beta male led by his nose, desperate to seem intelligent. Kinda like le Bron James: both are malignant dummies.

Not to be a wet blanket, because this was a kindly act, but in my Oregon home town a wealthy mom told the school district that she didn’t write checks for under $1k. She threw down the “I’m too rich to pay for my kid’s food card.” Just sayin’. His charity is commendable and out of pocket. However,charity without thought is a slippery slope to bernie,aoc and fauxcahontas. Again, just sayin’.

“…charity without thought is a slippery slope to bernie,aoc and fauxcahontas.”

Mr. rifraph, I believe I addressed the issue you mentioned. Others in this thread (gonzotx, healthguyfsu) have alluded to the same. I clearly commend Mr. Sherman.

Like biden, Kerry, Pelosi, Clinton and Obama, they give our money away, then extort it back into their pockets via their otherwise useless offspring – just like the Ukraine and Haiti.

How does this go unpunished, right in our faces??

The TV networks often trot out wealthy individuals saying that they want to pay more in taxes, if only the gov’t would increase them. If more of these wealthy demonstrated that they were willing to give up their money to help people like this, it would go a long way in making their plea believable.

And, heck, if more of them actually engaged in major charity acts (and not just buying tickets to fancy-pants “fund-raiser” dinners…) we might not need to raise taxes to help the poor.

Sherman is an SJW with the rest.

With a mouth like his, I’m not sure he has put his money completely where his mouth is yet.

(still, it’s more than most)

Why are “we” responsible for feeding breakfast to these children? There are actually districts that serve dinner and all meals through the summer

People are so busy, lazy, drunk( yes, drunk and stoned, I can testify to that) they can’t feed their children? Whose responsible ? Are we just going to let parents discard their parental responsibilities, are we surprised that the sjw are insane?

The more you let the government do, the more they own you and your children.

They have mainstreamed mentally ill aggressive children without fathers that were soaked in rum and crack in the womb and Dumped them on the schools to raise.

It isn’t charity and it isn’t compassion. It’s the left’s way of getting greater control of more people’s lives. Socialism doesn’t survive without everyone being dependent on the government.

notamemberofanyorganizedpolicital in reply to txvet2. | December 2, 2019 at 6:45 pm

“I am for doing good to the poor, but…I think the best way of doing good to the poor, is not making them easy in poverty, but leading or driving them out of it. I observed…that the more public provisions were made for the poor, the less they provided for themselves, and of course became poorer. And, on the contrary, the less was done for them, the more they did for themselves, and became richer.”

Yes, the best thing we could do for the poor would be to remove the obstacles that get in the way of their getting richer.

Chiefly the unreasonable taxes and onerous regulations that leftilibrals love to impose.

Dump minimum wage laws, too. They secretly hurt the poor. It’s a price floor on your labor that limits your ability to market yourself to employers. It’s harder to give Super Job a raise when Lazy Lob has to be cut a check for an amount he durn sure didn’t work for. Leading to Super Job either leaving or degrading to another Lazy Lob.

I expect there’s many more ambitious poor people than we think, who’ve concluded the system, as it is, doesn’t suitably reward ambition, and sometimes even punishes it. The lazy don’t like to be rebuked by the industrious

notamemberofanyorganizedpolicital in reply to drednicolson. | December 3, 2019 at 9:58 am

Richard Sherman is spending his own money. He can spend it as he wants to spend it. He is choosing to do good. My guess he is giving a lot more away than anybody hears about.

How much is not tax deductible?

Like that POS Leonardo decaprio who writes off all his payoffs to fascist causes so he can fly around in his jet without being called out for being a giant hypocrite.

How much is not tax deductible?

Like that POS Leonardo decaprio who writes off all his payoffs to fascist causes so he can fly around in his jet without being called out for being a giant hypocrite.

Wow! That Michelle can sure eat!

TheFineReport.com in reply to notamemberofanyorganizedpolicital. | December 3, 2019 at 1:26 am

Eating out of a trough gets expensive.

It also messes up the 2-foot thick makeup troweled onto her face.