“…it might not be the same articles of impeachment because the odds are we’ll have a ton more information.” 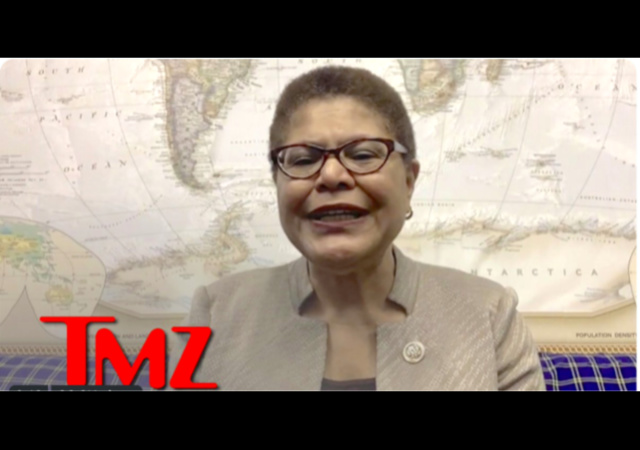 Rep. Karen Bass (D-CA) told TMZ she has already decided to support impeaching President Donald Trump if he wins in 2020.

After all, the odds are in their favor because “he probably has other examples of criminal behavior.”

TMZ founder Harvey Levin asked Bass what she thinks would happen if Trump wins in 2020 and the Democrats have control of the House and Senate.

Here is the transcript (emphasis mine):

REP. KAREN BASS: I guess I am ultimately an optimist and I believe that the 2020 election, assuming we can stop him from trying to cheat, is in our hands. I think it’s our responsibility to turn people out and I feel very positive about that. Ever since he’s been elected, we have won thousands of races around the country. If we didn’t impeach him, that also creates a tremendous amount of rage amongst people, like in our city of Los Angeles. But, it’s really not about the election. It’s really about the fact that he has committed a crime. He has abused his power and he has consistently obstructed Congress from anything. He doesn’t even want people who don’t work for him anymore to speak to Congress.

LEVIN: There’s no such thing as double-jeopardy in an impeachment trial because it’s political.

LEVIN: Suppose he gets reelected, but you’re right and you win back the Senate in a big way, if you did that, would you be inclined to take a second bite of the apple and reintroduce the exact same impeachment articles and then send it through again a second time — if you have a Democratic Senate on your side.

REP. BASS: Yes, but I don’t think it would be exactly the same. Here’s why: Because even though we’re impeaching him now, there’s still a number of court cases, there’s a ton of information that can come forward. For example, we can get his bank records and find out he’s owned 100 percent by the Russians. You are absolutely right in your scenario, but the only thing I’d say slightly different is that it might not be the same articles of impeachment because the odds are we’ll have a ton more information.

Yet another example of Trump Derangement Syndrome. I have no words for these people. It’s sad and pathetic.

I’m pretty certain she won’t be in office that long.

nah, she’s a lead pipe cinch to be reelected. i’m a Lost Angels native, so i know the areas listed on her web site. it’s all either rich lieberals or minority voters. see below:

DEMS like this are the reason for more of these attacks.

cook has her district as a D+37 she could die in office and they’d reelect her if she was still on the ballot.

the look on her face when he wins in a landslide and the GOP keeps the Senate and takes back the House….

Get one of the new Trump hats,

btw, if you never expect anything intelligent ever coming from a member of the Black Caucus, you’ll never be disappointed.

Every future Non-Progressive president will be impeached for not being progressive.

History is repeating itself. Trump is playing Kerensky in the attempted transition from Imperialist Deep State to a real Republic. The Dems are the Bolsheviks (and how). Just waiting for the storming of the White House.

“War Without End” is the Dem promise.

She should be informed that by her standards the republicans would have been completely within their rights to have impeached Obama just on general principles, and in fact should have.

and in fact should have.

And that’s the key fact of American politics. The Republican Party, which was founded in the 1850s for the express purpose of fighting the disgusting and nation-destroying policies of the Democrats, is no longer in that business.

The R’s should have done a lot of things. They should be doing things now. But in reality, the R’s don’t even earn “participation prizes.”

This is why the voters should ensure they never again to be trusted with any kind of power.
Civil war might end up being our only recourse left to thwart these horrible partisan hacks from ever being in charge again.

but you can, and should, mock it mercilessly.

And when Stupid says “hold my beer”, start filming.

These people are evil.

Karen Bass: Living proof that verifiable end-stage idiocy is no barrier to a long and lucrative career in CA Democratic politics.

Another walking talking self-caricature. Life is too easy for A.F. Branco.

This is why all Americans should refrain from voting for the Democrats. Though on one point she right, it’s unintentional, as she is sure they could have more to impeach Trump on – being they nothing any infraction- even J walking would be more than they have now.
The left are beyond frightening with what they want to do to this country.

Well if at first you don’t succeed, try, try again!

It sure would be interesting if IQ testing were a prerequisite for holding public office.

At some point Bass and the rest of the Democrat Party will decide that voting fraud and impeachment won’t give them what they want and resort to more …. forceful methods.

The importance of left wing terrorist groups like Antifa and BLM to the Democrat Party are merely the beginning of the violence to come. If you have ever wondered what it was like to live in Nazi Germany (or the Soviet Union or North Korea or Kampuchea) you may soon get to find out.

How many millions of firearms are in private hands waiting for just such a time?

Jeez, she looks like she’s still waiting for one of her chromosomes to be delivered.

She’s wondering …. “gee, wonder how I’d look as a brunette with straight hair … like Maxie Waters”.

BTW, I am shamelessly stealing this one.

Should be all over ads in swing districts as to why to vote a straight Republican ticket.

Here’s how we know the fix is in. None of the Republicans are reminding the Democrats that everything they’ve accused Trump of every Democrat does. If they were serious about stopping this they would remind the Democrats that they should be in notice.

If the Derp State GOP had ever been serious we wouldn’t have needed Trump.

She’ll have a hard time voting for new articles of impeachment in a House that’s once again Republican-majority.

Another dimwitted bozo Congressman from California. There are dozens!

Things aren’t going any better in da hood than in Afghanistan. And never will.

OTOH unless defeating Hillary Clinton is an actual impeachable offense, the Dems have squat to support impeachment.

Why can’t that level of stupidity be painful?

“Yet another example of Trump Derangement Syndrome. I have no words for these people. It’s sad and pathetic.”

I have PLENTY of words for these people. It’s probably best that I not put them out on the internet.

is she don lemon’s mother?

This charade of impeachment is not now, or ever has been, about high crimes and misdemeanors. The Dems/Progs cannot believe the smartest woman in the world lost a rigged election to a person who never held elected office. They will try to rig the 2020 election, when they fail, impeachment, her we come.