“As it so happens, Walmart had donated a large quantity of toys to the police department for situations like this.” 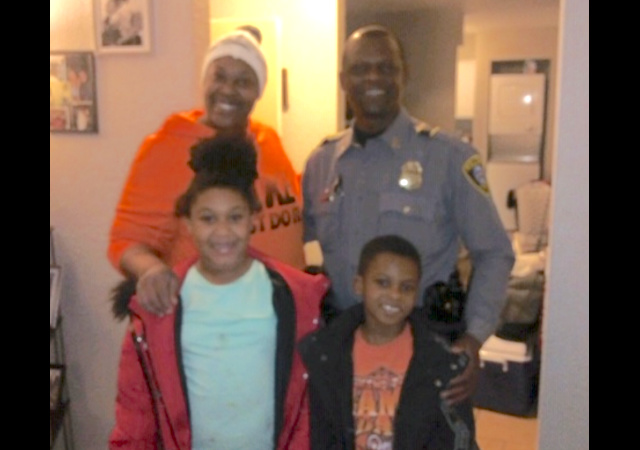 I had no idea Walmart does this. Apparently, the company provides toys and gifts to police departments to help families who lose gifts in robberies.

That’s what happened in Oklahoma City on December 23.

The Oklahoma City Police Department posted on Facebook that Sgt. Laguerre “responded to a home burglary” on December 23.

The robber stole all of the presents for the kids of a single mother.

Walmart and the OKCPD made sure the kids had a proper Christmas:

As it so happens, Walmart had donated a large quantity of toys to the police department for situations like this. Thanks to the generosity of Walmart, Sgt. Laguerre was able to deliver toys to the victim’s home on Christmas Eve. He led the victim to believe he was returning to do some follow-up investigation. Upon arriving he surprised the victim and her kids with the toys. Sgt. Laguerre said the victim was speechless. He stayed while the kids opened presents and enjoyed the moment with the family. Sgt. Laguerre said, “This is what connects us with the communities we serve” and described his experience as the best Christmas gift he could have received.

Sgt. Laguerre said doing this for the family was “the best Christmas gift he could have received.” He also said providing help to families in these situations “connects us with the communities we serve.”

If you see stories like this on social media or the news please link in the comments!

It is postings like this that renew one’s faith in their fellow man where we see evil was overcome with good.

TY, Mary, for sharing this!

I hate to be the cynic, and I have no reason to doubt the story or the family involved, but I can imagine some people would take advantage of this by having friends or family “steal” their presents, just so they would then get free presents from Walmart through the police.

I suspect the cops can tell whether a theft is genuine or not. Crimes have patterns including frauds. Cops learn those patterns through experience.

It’s a very generous gesture, but I’m cynic enough to think that it was mostly comprised of stuff that wasn’t moving in the stores.

https://www.breitbart.com/local/2019/12/26/brothers-donate-their-christmas-gifts-to-kids-displaced-by-fire/
Two brothers decided to donate their Christmas gifts to children displaced by a fire that broke out in a Minneapolis, Minnesota, building that houses the homeless on early Wednesday morning.

Brothers Andrew and Brandon Brundidge saw the call from local officials to help those displaced by the fire and did not hesitate to pitch in by donating their Christmas gifts to the children in need.

https://www.breitbart.com/faith/2019/12/26/strangers-raise-1000-womans-car-repair-bill/
Rachell Tucker did not know what to do when she realized the bill to have her car fixed was going to cost much more than she expected, according to WSBTV.

“I was going to have to leave the car there until I could come up with the money and something just came over me and I broke down crying,” she said.