“Cruise ships have been used for emergency housing after natural disasters and for extra housing for things like Olympics.” 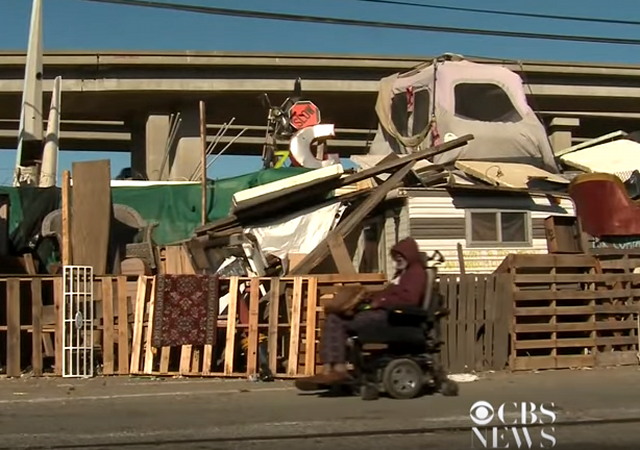 Like many California cities, Oakland has a serious homeless problem. Leaders there are considering the unique approach of providing housing for the homeless by parking a retired cruise ship on one of the city’s docks.

Oakland considers housing the homeless on a cruise ship

This is not exactly “The Love Boat,” but it could help make a dent in one California city’s homeless crisis.

During a city council meeting on Tuesday, Oakland City Council President Rebecca Kaplan broached the idea of using a cruise ship to house up to 1,000 homeless people, suggesting a ship be brought to the Port of Oakland as the region deals with skyrocketing costs of living and a shortage of affordable housing.

“It could be a great way to house a lot of people quickly,” Kaplan told the San Francisco Chronicle. “Cruise ships have been used for emergency housing after natural disasters and for extra housing for things like Olympics.”

Homelessness has spiked in Oakland, with a 47 percent jump in two years — one of the largest surges of any California city, according to a one-night street count released in July.

The count, which used federal guidelines, showed Oakland had 4,017 homeless people, up from 2,761 in 2017. The increase has put the city’s per capita homeless rate higher than neighboring San Francisco and Berkeley.

Kaplan told the Chronicle she plans to present a proposal to the council in January that will be at “no or low” cost to the city, because residents of the cruise ship would pay for rooms based on their income. The city would not buy the cruise ship.

This video report from CBS News notes that the Port of Oakland is designed for cargo ships, and doesn’t have the means to berth a cruise ship:

Twitchy has compiled some reactions to a report on this from KRON News:

What about a big cruise ship thats built on the land. Like a land houseboat. How about that.

Do you want pirates? Cause this is how you get pirates.

Honestly, even when they are full of not bums, cruise ships are not a place you want to be when people are ill.

Awesome remember the noro virus on all those cruise ships. ? Go ahead and bring it to the dock.

What could possibly go wrong? Do you WANT to wipe them all out with one communicable disease? Oh, right…maybe?

Y’all will try anything before providing actual housing

I do not think I would step in the water after the first hour of this “fix.”

Leftists treat the symptoms rather than the cause. Thus, the problem can continue to be exploited but we just need more of other people’s money.

notamemberofanyorganizedpolicital in reply to TX-rifraph. | December 13, 2019 at 6:11 pm

They just ensure they get worse so they can steal more!

If one retired cruise ship can house 1,000 homeless, what happens with the other 3,000+ homeless? How will they be fed? What will the city do for sanitation? Biggest question; how much will the ship cost? How much for berthing space? How much to pay for whatever personnel needed to keep the ship’s environmental systems operating?

This sounds like yet another boondoggle coming out of the LA-LA State.

Buy new cruise ships to augment this one. It isn’t fair that homeless get old boats. Next, they will demand cruises . Once the homeless get through the ship will be too toxic to sink as a reef.

The 1000 will pay for admission by recycling those brown paper bags that the malt liquor bottles come in.

Sorry, I know that’s a bad joke, but I was inspired by the pirates tweet above. That one made me lol.

Simple. The cruise ship will make a periodic short cruise after which it will have room for another thousand.

Fill the ship with Oaklands degenerates, sail it to New York and dock it there.
I’m sure the ‘good’ mayor of NY would understand and approve of this method.
You’re welcome.

Navy crews work constantly to keep their ships clean, safe, and sanitary. Put the homeless on a ship, and it will become uninhabitable within a couple weeks. Such a ship would be destined for the scrapyard or given to the Navy for target practice, for it could never be cleaned thoroughly enough to put back in service.

And the illegal dumping that the city will be complicit in to try and mitigate the cost of maintaining this floating Petri dish.

Navy crews work constantly to keep their ships clean, safe, and sanitary, for disease runs rampant in such confined space. Putting homeless people on a cruise ship will make the vessel uninhabitable in a very short time. The ship would ultimately be scrapped or given to the Navy for target practice, since it would be virtually impossible to clean it thoroughly enough to be put back into service.

How do you book a first class cabin? Who gets to sit at the captain’s table?

Is this the sequel to “Ship Of Fools”?

notamemberofanyorganizedpolicital in reply to TrickyRicky. | December 13, 2019 at 6:18 pm

This is a mental illness problem, not a housing problem.

Not necessarily. There are some people who would just like to hang out with their friends all day rather than work.

it would be too easy to control the drugs and alcohol and resemble a prison ship. Few would stay, all would demand shore leave, there would be no entertainment, there would be fights and murders.

The real plan, that they won’t disclose until the homeless are on board, is to then sail the ship out to sea in the general direction of China.
The crew will lower themselves into lifeboats, and be picked up by strategically placed ships.
The homeless will continue to sail toward China. Given their usual degree of sobriety, it is unlikely that any of them will notice until the ship runs aground on the Chinese coast.
The Dem city council can then claim that they have reduced the number of homeless by 1000 or so.
Rinse and repeat as needed.

The Dung Boat….Soon will be making another run…

notamemberofanyorganizedpolicital in reply to Virginia42. | December 13, 2019 at 6:17 pm

Better not laugh too hard I guess or ABC might produce it
starring George Stephanopoulos…..

So, who maintains the boat? The homeless? Or some select contractor hired by the city? Because ships require a LOT more maintenance than a comparably-sized land building.

I’m going to guess that the councilman also doesn’t have any idea on how waste disposal happens on a cruise ship. (Hint, they only have two choices: dump it overboard or carry it back to port where it’s sucked out and transported away somewhere.) (BTW, I’m also guessing the councilman has no idea how a land-based sewage system works, either.)

Now… this would be a good idea if the secret plan was to turn it into a detox/rehab cruise. Once they’re all aboard, off it goes into the Pacific, with not a single drop of booze, leaf of marijuana, nor gram of coke or heroin or meth. Drive around the Pacific until the occupants are all sober, have all killed each other, or have all succumbed to illness. Then, offer the survivors jobs with the cruise lines………

On “Deadliest Catch” they call this “seahab.”

And these people are paid to come up with nuttiness like this. No wonder governments are so deep in the red.

There are probably some cruise ships tied to piers in Russia that could be used.I do think it would be better to house the City Council in one though.

Just one question: where will they move it to once the finally tuned hundreds of millions of dollars of precision machinery breaks down and the entire vessel turns into a floating, overflowing septic tank/biohazard dump?

up side: if you load up the ship, tow it out to the Farallons, then use it for a USN SINKEX, you’ve reduced your vagrant population, created a new reef for fishermen, and fed the local great white shark population

So as they board, you say “welcome aboard, chum”?

And those sharks will never attack humans again.

Put together a pool. Which end will sink this comic tragedy first? 1. Parasitic insect infestation. 2. Sewage system collapse. 3. Drugs, murder and rape. 4. Fire (when occupants respond to the first power outage by pulling out their matches). 5. Tipping over like Guam. 6. Typhoid. 7. Nobody boards in the first place because too far from drugs and food.

That cruise ship would be in the same shape as the New Orleans Superdome. In about the same amount of time as well.

Better yet: load every elected official in California on a cruise ship, sail it out to sea, and sink it.

Had a hard time believing that – whatever it was – is named rebecca.

Way to avoid tackling the real problem, which is the Bay Area’s green space mandates, affordable housing mandates, and insanely expensive and time-consuming permitting process have made market housing unavailable and unaffordable.

I read an article 20 years ago that said legal costs, interest paid while waiting out the permitting process, and environmental impact fees collectively added more than $100k to every housing unit built. I’m sure it’s even more now. That’s why builders want to build nothing but million dollar houses, when you have > $100k fixed overhead it makes a lot more sense to build a million dollar house than a $500k one. Not that builders build anything that cheap because the median house price is significantly higher than that.

Then, one dark night, they’ll sail the ship a hundred miles out to sea, and throw all the homeless people overboard, all while piously accusing other American cities of driving the homeles out.

Ahoy! Which way to the poop deck?

What could possibly go wrong??????

The stupidity of this is the reason I moved from LALA land to Texas.

…You want pirates. This is how you get pirates…

You have to understand Oakland’s strategy. Get the ship full, tell all the “guests” they are going for a 3 day cruise, drive around in the Pacific for day or two, they dock and drop everyone off in Seattle or LA or San Diego. Repeat as necessary.

Liberal Playbook: Never fix the problem fix it, point it out and move on.