In addition to threatening the US, the North Korean leader met with his top military officials for defense talk. 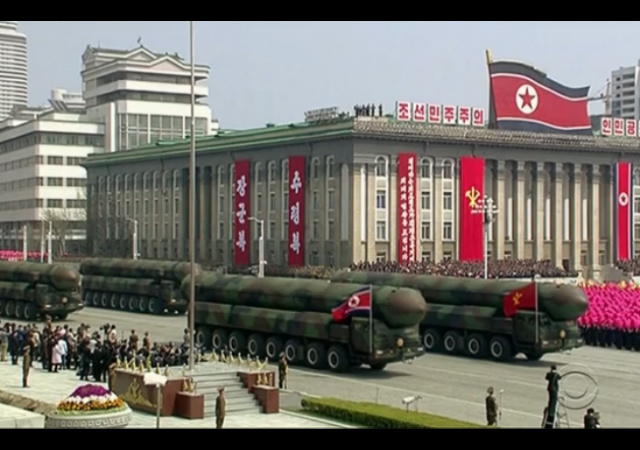 This Christmas Eve, members of the North American Aerospace Defense Command (NORAD) will watch for any signs of a North Korea missile launch, which officials in Pyongyang have described as a “Christmas gift.”

U.S. officials are on high alert for signs of a possible missile launch from North Korea in the coming days that officials have referred to as a “Christmas gift.”

A significant launch or nuclear test would raise the end of North Korea’s self-imposed moratorium on missile launches and tests. It would also be a major blow to one of President Trump’s major foreign policy goals to get North Korea back to the negotiating table to eliminate its nuclear weapons.

Earlier this month, the North conducted what U.S. officials say was an engine test. Experts believe it may have involved an engine for a long-range missile.

“North Korea has been advancing. It has been building new capabilities,” said Anthony Wier, a former State Department official who tracks nuclear disarmament for the Friends Committee on National Legislation. “As long as that continues, they gain new capabilities to try new missiles to threaten us and our allies in new ways.”

North Korea issued its threat in an attempt to force the Trump Administration to move on sanctions relief without the North Koreans have to denuclearize. Commercial airlines are concerned about a potential launch.

The U.S. Federal Aviation Administration issued an alert earlier this month warning of “longer-range missile test launches prior to the end of 2019, or in the early part of 2020,” according to a threat analysis obtained by ABC News.

The KNCA said Kim discussed “important organizational and political measures and military steps to bolster up” the armed forces and “gave analysis and briefing on the complicated internal and external situation.”

It added, “Also discussed were important issues for decisive improvement of the overall national defense and core matters for the sustained and accelerated development of military capability for self-defense.”

On a lighter note, NORAD will continue its tradition of tracking Santa Claus.

NORAD’s Santa tracking website www.noradsanta.org gets nearly 15 million unique visitors from more than 200 countries and territories across the globe, the agency said.

…NORAD’s Santa-tracking tradition started in 1955 when a Colorado Springs department store misprinted the phone number to the North Pole in a newspaper advertisement, according to its website.

The first call came from a little girl and went to U.S. Air Force Colonel Harry Shoup, director of what was then known as the Continental Air Defense Command.

The colonel assured the girl that Santa was on en route, and when more children called the command center, the military added a new task to its defense mission.

Renamed NORAD three years later as a combined Canadian and U.S. agency, the Santa mission has continued uninterrupted ever since. Santa watchers can now track his whereabouts through NORAD’s Facebook, Twitter, Instagram and YouTube accounts.

We should respond with 5, maybe 10 gifts, cobalt laced. Afterall, Kim is very interested in advanced technology.

Every kid knows the weakest kid on the playground should never taunt the strongest one.

I had an early interest in science, I was asmatic, and very skinny (long gone now). There was a great deal of bullying, with the principal telling my parents and I that I would have to take lumps like everyone.

Not long after that I used knowledge of science to to neutralize the biggest bully, thoroughly destroying his rep, and putting him in the hospital.

Brawn is not anywhere near as useful as smarts. The lessons I learned from that served me well throughout life. I always have layers of contingency plans in place in order to react quickly and prevail in adversarial situations.

I have lived my life following the golden rule, and I bend over backwards to help others, conversely, when someone tries to screw me over, I show little to no mercy. Life experience has taught me that it is incredibly rare for slime bags to change their stripes. They do become better at hiding their true nature over time.

Also, North Korea is run by the worst kind of slime bags, and their leaders should be neutralized.

Trouble is, when the weak kid brings a gun to school the strong kids have to be careful not to provoke him, which means he can get away with a lot.

Who needs a gun? It is amazing how many incapacitating and even lethal things which can be made from common products.

Also great practical jokes, like dusting the faculty toilet seats with finely ground silver nitrate. Spouses of college professors are well aware that younger female students are often infatuated with their male professors. So when their husbands develop black rings on their tails, which will not wash off (well 6 weeks or so they fade away), that triggers suspicion.

Initially, there was little public discussion, after a few weeks that changes. A great mystery, which was never solved.