“took both hands and unlatched the pin from my jacket” 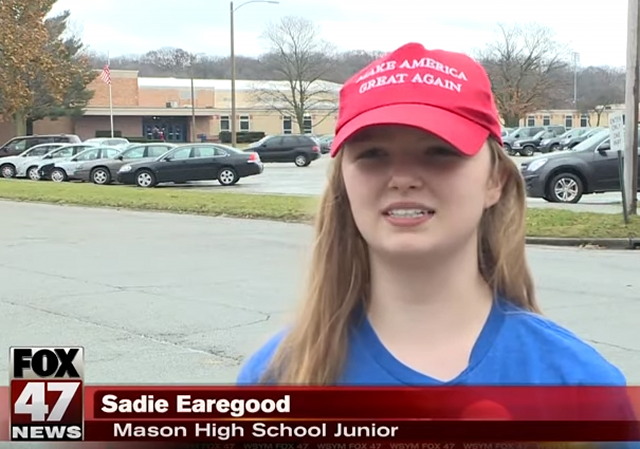 Can you even imagine such an accusation being made while Obama was president?

A Michigan high school student claims her teacher assaulted her last week because she was wearing a pin supporting President Trump.

Sadie Earegood, a 16-year-old junior at Mason High in Mason, Michigan, told Fox News on Tuesday that her teacher “aggressively” grabbed her “Women For Trump” pin that was attached to her jacket, saying he “took both hands and unlatched the pin from my jacket and put it upside down on his shirt and said it belongs upside down.”

She told Fox 47 the incident took place on Dec. 5 during school hours.

Her family has filed a police report, claiming that the teacher assaulted her, WILX 10 reported.

“He had no right to put his hands on my child over a pin or anything else,” said Sadie’s mother, Capi Earegood. “The First Amendment gives everyone the right to express their freedom of speech. No one should get that upset about someone wearing a political pin.”

Had she been wearing a Warren, Buttigieg or Sanders pin, I’m sure the teacher wouldn’t have had a problem. The left hates everyone who doesn’t follow the party line.

Sounds like someone will be getting a $25K Xmas present from the district. Isn’t that what a similar incident caused a local Oregon school district?

For this very reason school boards have in their student handbooks guidelines for both students and faculty on unacceptable attire or ornamentation. Many things which are in an area to be considered controversial or a distraction from teaching can be requested to be changed out or removed. Of course ripping it off with a biased opinion is a no no for both parties involved.
Perhaps this teacher COULD have been in the right but totally over stepped the rules of engagement.

You’d be wrong. Political expression does not constitute a “controversial” item…especially when it doesn’t go both ways.

I failed to qualify that “controversial” is a two way street and should apply to all parties in theory and application.

A male teacher is putting his hands on a 16 year old female student for a purpose other than self-defense. How is this not the leading fact of this story?

The taking of the button is to point I believe the crux of the issue here. If there is policy in place as to what causes a distraction from teaching, whether it is a T-shirt or Pin, the forceful taking by the teacher would be outside of the policy of how to administer on the infraction. As to “a distraction from teaching” I believe it is when and if “whatever” is the cause to create a disturbance within the classroom it is upon the teacher being the adult and credited by his/her position to teach should also NOT be the one to create THE distraction or be the disturbance, let alone acting forcefully to create one.

Shirts that expose the stomach, back, or cleavage are not appropriate.
 All undergarments must be covered and not visible.
 Skirts/shorts/dresses must be appropriate for the school setting. A standard guideline for appropriate skirt/short/dress
length is past the fingertips when arms are extended down.
 Clothing that displays alcohol, drugs, tobacco, gang association, weapons, sexual or suggestive references, profanity,
violence, intimidation or organizations promoting any of these are not appropriate.
 Hats are not allowed in some classrooms. If you are allowed to wear a hat it needs to be worn straight forward or
straight backward.
 Shoes must be worn at all times.
 Sharp and/or spiked jewelry or chains are not appropriate.
 Skin tight clothing or clothing that has excessive holes may be deemed inappropriate for the school setting.
 Students are expected to bathe and groom themselves regularly so that their personal hygiene is not disruptive to the
educational environment of students and staff.

Shoes must be worn at all times.

“No. but, remember we got me new shoes yesterday? I can’t go; I’ll be violating the dress code!”

A local article about the incident indicates that we need to hold off coming to a conclusion. The teacher, originally from Nigeria, is highly regarded.Students support Mason teacher after Trump pin ‘incident.’

Both current and former students have reached out to News 10 saying that they don’t believe Paul Kato would ever do anything like that.

Aker said she doesn’t believe the assault case that Sadie Earegood claims happened on Dec. 5 is the whole story.

“It’s been the talk of the school so I just feel like it’s unfair because anyone who has Kato, knows Kato, he’s not that kind of person,” Aker said.

Kato is a media technology teacher that has worked at Mason High School for years. Aker said Kato hasn’t been in school since the alleged incident took place.

“He’s been gone,” Aker said. “A lot of classes are really struggling right now. Me personally, I can’t even continue his class until he returns.”

Kato is involved in the community and is the director of the school paper and video announcements.
“There’s like a video put out every single day in the high school and he’s in charge of that and did the production of that,” Alexa Martin, a former student, said.

Kato is originally from Nigeria. Last year, he helped to build a residential soccer school, the Kato International Training Academy (KITA), which opened with 24 students.

“There’s this fundraiser he has every year, it’s called “Send Soccer,” and hundreds of people participate, donate money, and it’s all to raise money for his school and Nigeria for under privileged children,” Aker said.

People who are speaking out are just looking for both sides of the story to be told.

“Her perspective must have been totally different than what Kato’s perspective was, but from witnesses around it seemed as a jokingly matter,” Aker said.

“Everyone is just outraged. That’s just the best way I can put it. Everyone is just upset because they feel like there’s more to the story than what’s being said,” Martin said.

Lefty teachers are capable of imposing their political views on students. Students are capable of making false accusations. Until the investigation is complete. we will not know which is the truth.

So it’s OK to hold off jumping to conclusions because of his land of birth & color of skin? Had the teacher been white, you would’ve wanted him fired ASAP. That’s what 8 years of “Zero” has gotten this country…”Oh, the teacher is black, he didn’t mean it”.

You have reading comprehension issues. This is what I wrote.

Regarding students being capable of making false accusations, I refer you to the following.6th-Grade Girl Says She Lied About Boys Cutting Her Dreadlocks. Recall all the doofuses who,before all the facts were in, who were denouncing Karen Pence for teaching at that so-called”racist school” – called “racist” due to a accusation that was later proved to be false.

Regarding making fast responses before all the facts are in, I refer you to idiots Joy Behar and Michigan Congresscritter Tlaib blaming “white supremacy” or the like for the recent Jersey City killings. Given that blacks did the killing- of the same group that harassed the Covington kids at the Washington Monument earlier in the year- it is rather difficult to blame “white supremacy” on the Jersey City killings.

Perhaps you have no problem going off half-assed, but I prefer to wait until the facts are in.