The House will vote on the articles next week. 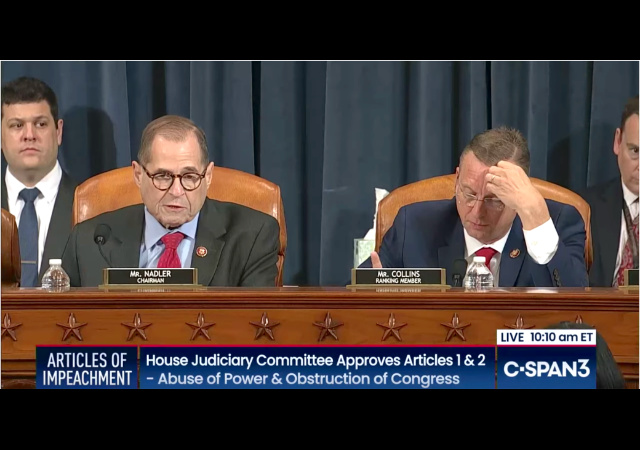 The House Judiciary Committee approved two articles of impeachment against President Donald Trump: abuse of power and obstruction of Congress.

The vote came out to 23-17. The House will vote on the articles next week before they head to the Senate.

Chairman Jerry Nadler caused Republicans to explode on Thursday when he postponed the vote until today. The committee finished hearings yesterday after 14 hours. He chose the delay just before midnight.

Nadler explained he wanted members of the committee “to think about what has happened over these past two days, and to search their conscience before we cast their final votes.”

Democrats have insisted that “Trump is undermining national security and the integrity of the 2020 election.” Their argument stems from a phone call with Ukrainian President Volodymyr Zelensky on July 25 where he suggested a look into Vice President Joe Biden.

Republicans pointed out the articles have nothing to do with their first accusations against Trump, which included bribery and extortion.

That led to Republicans decrying what they called a “bush-league stunt” by Nadler to make sure the vote would be carried on daytime television.

“Mr. Chairman, there was no consulting with the ranking member on your schedule for tomorrow — you just blew up schedules for everyone?” Rep. Doug Collins, R-Ga., said. “You chose not to consult the ranking member on a scheduling issue of this magnitude? This is the kangaroo court we’re talking about.”

Despite Nadler’s explanation, voting only took 15 minutes this morning.

The Democrats control the House, but 31 Democrats represent districts that voted for Trump in 2016. Polls have shown impeachment has not swayed many voters:

In a poll released by Monmouth University on Wednesday, 45% said Mr. Trump should be impeached and convicted, while half of Americans opposed Mr. Trump’s removal from office.

Signs are also emerging that impeachment could pose a challenge for Democrats in some battleground states in the 2020 presidential election. A Marquette University poll of Wisconsin voters released on Thursday found that during the first week of December, 52% of voters thought Mr. Trump shouldn’t be impeached, compared with 40% who thought he should.

I am totally confused as to why the Democrats are working so hard to get Trump re-elected.

I’ve come to the conclusion that there are a lot of leftists who truly believe that they represent the country as a whole. In their mind America is a left of center nation.

They don’t understand that it just looks like they represent the country because they have the media and Hollywood behind them. Add that into their refusals to accept that others might have opinions that don’t agree with their own opinions, that they might be wrong on some issues, and that they don’t even want to hear opposing opinions.

In other words they live in a bubble with a wrong world view that has not yet popped.

So they think impeaching Trump will help them in 2020. They can not comprehend that it’s backfiring on them and they ignore and even get hostile towards anyone who tries to tell them. (Like Bill Maher as an example)

For a lot of them, I don’t think it’s about any sort of populist idea of representation. They honestly think they know better and should therefore do what is necessary to make the ‘right’ things happen. They weren’t elected to do what the people want (much less their Constitutional duties), they were elected because they are brighter and more knowledgeable and better than the other people, and should therefore get on with their program.

(Sadly, there’s a whole lot of voters who seem to think way, too. So they keep voting these totalitarians into office.)

It has gone beyond them simply “living in a bubble” I have met rabid cult-dwelling religious fanatics more capable of rational thought than some anti-Trumpers out there. Sadly, some of them used to be rational people before 2016.

Or – did you just never notice they were irrational because it was on minor matters and you ignored their behavior as a peccadillo?

notamemberofanyorganizedpolicital in reply to TheOldZombie. | December 13, 2019 at 6:34 pm

That’s because the Lefties of all strips are STUPID!!

…and many are just plain evil….

I don’t understand it either. The online trolls just spout craziness and the articles I read from the Democrat media seem to spout the same level of craziness. It is hard to accept that the left is that delusional instead of playing a deep game.

One tactic the left uses is to repeat a lie forever with the goal of driving cultural acceptance of it. So maybe they intend to lie forever about the non-existent grounds for this impeachment hoping that the lie will someday be accepted. So instead of the victors writing history the losers rewrite it.

Let’s get this to the House floor where I hope it will fail because a bunch of Democrats get cold feet.

Or if it passes than into the Senate’s hands where the Democrats will no longer be in control. Have the trial, embarrass the Democrats in front of the nation, and find Trump not-guilty.

Than I get to laugh as I watch Trump and his campaign beat the Democrats silly over it.

Let’s get this to the House floor where I hope it will fail because a bunch of Democrats get cold feet.

Won’t happen. The “cold feet” that is. The House democrats have well and truly painted themselves into a corner and the only way out for them is to pass the Articles of Impeachment and toss the whole bloody mess over to the Senate where hopefully saner minds put an end to the whole sorry mess.

“…where hopefully saner minds put an end to the whole sorry mess.”

Not before every commie democrat is first called to testify.

I agree it’s doubtful that there will b defectors, Pelosi keeps saying they aren’t pushing any for how to vote on this, so you know she is giving then all notice that they had better heed her desire.
I hope the President can mount a massive trial, putting everyone on the stand and being prepared to drop the hammer on everyone who perjures themself.
Put Schiff on. Pelosi, Mad Max, Ciaramella, Vindman, Biden, Comey, Brennan, Clapper. Even bring in members of the media to give testimony of their years of pushing impeachment from before he took office.
A public forum makes even the propaganda machine cover it and rhetoric won’t cover what people hear for themselves.

I hope, if this passes in the full House (and I hope there’s lots of Democrat defections) that McConnell takes his sweet bippy time and drags this out to close to November. Make everyone vote without any time for their constituents to forget.

Also, don’t allow any bull***t “Scottish law” votes. You can vote “Guilty – Remove” or “Not Guilty – Don’t Remove”. PERIOD.
Any other vote will have you censured and removed from the Senate.

Somebody needs to ask Nancy Pelosi about the slush fund used by members of Congress to pay their sexually violated victims to be quiet, with OUR money.

Until violators are identified, all members of Congress should be suspects!

In a poll released by Monmouth University on Wednesday, 45% said Mr. Trump should be impeached and convicted

I wonder what the number might be if they only polled people who could tell them what “impeachment” actually means. Constitutional or historical meaning; either would do.

Wonder what the number might be, too, if the poll only included people who will actually vote next November.

Or if they could correctly spell impeachment.

Dems painted themselves into a corner with their constituents and by trying to appease the far left. Funny to watch it all unfold and sad they represent a contingent dumb enough to elect them.

Truly sad that there are a majority of them in the House – meaning a significant portion of the country has 50%+1 of the votes residing in small, venal, ignorant hands.

So in effect he’s being impeached for (1) doing his job and (2) not doing what the Dems want. If (2) were to become the standard, a future (or current) president could be impeached for vetoing a bill. (1) is too ridiculous to even address, given that the whole process is an abuse of power by the left.

The damnocrats have succeeded in making “impeachment” a badge of honor.

“History furnishes one example only of a first Magistrate being formally brought to public Justice. Every body cried out agst this as unconstitutional. What was the practice before this in cases where the chief Magistrate rendered himself obnoxious? Why recourse was had to assassination in wch. he was not only deprived of his life but of the opportunity of vindicating his character. It wd. be the best way therefore to provide in the Constitution for the regular punishment of the Executive when his misconduct should deserve it, and for his honorable acquittal when he should be unjustly accused.

THE RECORDS OF THE FEDERAL CONVENTION OF 1787

Listening to dumocrats whine is as interesting and watching Janet Reno naked. I’m only guessing on that Reno thing, I’ve seen lots of ugly crap in my life, but have been spared that horror.

Democrat rep admits that impeachment vote was delayed because it was too late for a TV audience. This is what they’re worried about. pic.twitter.com/4uGfDBs9Zl

Yeah nadler you liar, one of your thugs admitted it wasn’t going to show well to the late night audience of 12 people so he delayed the vote for a daytime audience.

The democrats rushed their sham Articles of Impeachment through so quickly they forgot to include: Treason, Bribery, or other high Crimes and Misdemeanors. “Abuse of power?” Nebulous, subjective non-crime. “Obstruction of congress?” The Executive Branch is a co-equal branch of government, and does not answer to congress anymore than congress answers to the Executive Branch. These sham Articles should be dismissed by the Senate outright on day one, with prejudice.

Scott Adams has it right,.
The actual 2 articles of impeachment are as follows….

And senior Dems have been scrambling to reach him all day.