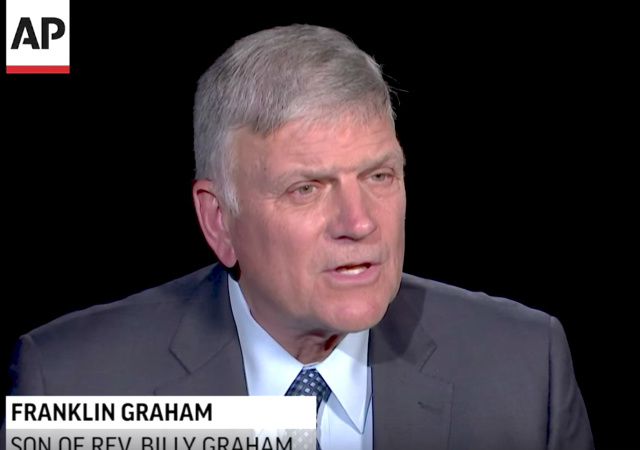 Franklin Graham, the son of late pastor Billy Graham, tweeted that his father would “be disappointed” that the magazine published a piece calling for the removal of President Donald Trump.

Billy Graham helped establish the magazine back in 1956.

.@CTMagazine released an editorial saying @POTUS Trump should be removed from office & they invoked my father’s name, so I felt I should respond. Yes, @BillyGraham founded Christianity Today; but no, he would not agree w/ their piece. He’d be disappointed. https://t.co/XO5Fj0hxnc

Graham wrote a longer response on his Facebook page.

Graham lashed out at Christianity Today’s editor-in-chief Mark Galli, who penned the op-ed, for invoking his father’s name. He guessed Galli did that in order “to bring legitimacy to their statements.”

Galli wrote that those at the magazine “feel it necessary from time to time to make our own opinions on political matters clear—always, as Graham encouraged us, doing so with both conviction and love.”

He reminded everyone that his “father knew Donald Trump, he believed in Donald Trump, and he voted for Donald Trump.” His father “believed that Donald J. Trump was the man for this hour in history for our nation.”

The next paragraph included Trump’s accomplishments three years into his first term:

Graham claimed the left has used Christianity Today “for their political agenda.” This op-ed is the latest evidence that the publication “has moved to the left and is representing the elitist wing of evangelicalism.”

Galli issued this warning for Christians who support Trump:

To the many evangelicals who continue to support Mr. Trump in spite of his blackened moral record, we might say this: Remember who you are and whom you serve. Consider how your justification of Mr. Trump influences your witness to your Lord and Savior. Consider what an unbelieving world will say if you continue to brush off Mr. Trump’s immoral words and behavior in the cause of political expediency. If we don’t reverse course now, will anyone take anything we say about justice and righteousness with any seriousness for decades to come? Can we say with a straight face that abortion is a great evil that cannot be tolerated and, with the same straight face, say that the bent and broken character of our nation’s leader doesn’t really matter in the end?

Graham had a response for that as well:

Is President Trump guilty of sin? Of course he is, as were all past presidents and as each one of us are, including myself. Therefore, let’s pray for the President as he continues to lead the affairs of our nation.

So CT has chosen who their master is, and it isn’t GOD!

The Democrats declared war this week. Not on Donald Trump but on the United States and the Constitution.

Only The Damage To America Is Real

Lots of news outlets labeled yesterday’s House vote to impeach President Trump “historic”. It was…..Because it was not the House that impeached President Donald Trump, it was the Democratic Party.

JusticeDelivered in reply to notamemberofanyorganizedpolicital. | December 20, 2019 at 7:36 pm

All this impeachment crap and the proceeding Russia Gate crap has done is make support Trump even more. Dems have become totally unacceptable. It is incredible just how irrational and unhinged they are.

“Pius bias” by CT. Progressive theology in action. I think there is a saying about throwing stones… moat in one’s eye… etc.

moat in one’s eye
Cry me a river.

(Heh, Autocorrupt and typos can be funny.)

Is the mote full of alligators?

Wye awl this emoting about moats inn wons I ?

Better than “here’s mud in your eye.”

If the President were guilty of what the Democrats claimed
Heck, even then it wouldn’t be worthy of impeachment, since the things of which they accuse him are not crimes.

And, yes, there are an awful lot of establishment folks trying to use Christianity to shame those who support Trump in any way. Almost like there’s someone handing out talking points, or something.
It certainly doesn’t make me think highly of the theology or doctrine of those confusing the Kingdom of the Right Hand with the Kingdom of the Left Hand.

Heck, even then it wouldn’t be worthy of impeachment, since the things of which they accuse him are not crimes.

That was my chief reaction when I read the CT editorial.

Even if they were crimes, why would they be the kind of crimes that should bother a Christian? Especially one who had already held his nose and voted for Trump in 2016 because he was not Hillary Clinton? Why would these offenses (if true) convince such a person to change his vote?

On the plus side, I now know not to trust CT.

Ever notice how these claims are always made but they never say why?? I would say 150 billion pulled ou8t of a bum I guess and left on teh tarmac in Iran might be a threat to the US but the insane never mention it.

When your house (or country) is on fire and there are firefighters willing to help put it out, asking for particulars about a firefighter’s personal beliefs or habits is entirely irrelevant.

Stated otherwise, if our goals are the same, what’s the problem?

It is nearly always upsetting to me when liberals attempt to use scripture to shame conservative Christians about their support of President Trump. I don’t know the man personally and can not vouch for his personal faith. Nevertheless, his actions speak and he clearly wears his heart on his sleeve, which is endearing to me and prompts me to lift him up in prayer.

PDJT does not seem to be a typical card-carrying Evangelical Christian which seems to be the label liberals want to stick him with. I’m more inclined to see and liken Trump’s actions to that of the old testament Persian kings Cyrus and Darius, who after a season freed the Jewish people to return to Israel to rebuild the temple, with their blessing and commitment of protection, provision for the work and the return of all the temple service items the Persians took from the Jews during their conquest of Jerusalem.

Clearly the Persian Kings Cyrus and Darius were not Jewish, but their hearts were tendered to the Jews and their love for G-d and those 2 (pagan) kings facilitated the Jew’s return to Israel and restoration of their land and faith.

The fundamental error of liberals and their warped worldly view of the scriptures – and of G-d – is the notion that G-d only works through card-carrying practicing believers. Not so. He owns the entire world (Psalm 24:1) and can do whatever He wants with it and whomever lives in it.

“The earth is the Lord’s, and the fullness thereof; the world, and all who live in it.”

I believe Trump is G-d’s man for the season. Trump’s character is just one of those ‘stumbling blocks’ G-d likes to throw down into the paths of them what can neither see nor hear what the Spirit is saying. It makes them focus on Trump’s character flaws and thereby miss what G-d is doing through him.

In a certain sense, I believe the Father of Lights says: “I sent my Son to set men free. How DARE you make them prisoners again through the governments of men. I will send my man Trump to remind them once again it is FREEDOM I intend for my people.”

That’s my freak flag and I’m proud to fly it. 😉

I was thinking King Nebuchadnezzar.

He was commissioned by God to deal with the corruption in Judah.

I agree with your suggestion about the madness episode.

I gather CT no longer believes in the 9th commandment….

I find it interesting that Mark Galli announced his resignation in October, and will be officially out on January 3. This seems like a parting shot as he runs out the door, leaving behind the steaming pile of crap for the next editor.