Yes, Nancy Pelosi hates Trump, and so do the other Democrats who are brazen in claiming victory from Trump being branded with impeachment. 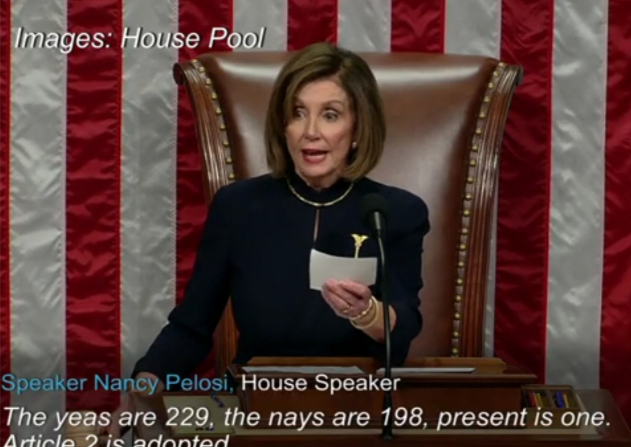 I’ve noticed that many of the articles and opinion columns in the mainstream media about impeaching Trump include the idea that now he must bear the permanent mark of having been one of the few presidents in our history who have been impeached (see this as well as this, for example). In other words, they feel that impeachment causes Trump to wear a shameful and symbolic scarlet “I” for all time.

But I wonder whether it has ever occurred to them that the badge he’s wearing might look to a lot of people – even, perhaps, including historians of the future – like a scarlet “M” for “made into a martyr”?

If you impeach someone for trivial reasons or based on lies (or both), why would that make the impeached person look bad? Why not the accuser?

After all, hadn’t you better make sure that your accusations appear to be sound? Framing someone or over-reacting to something that person has done can make you seem hysterical, mendacious, scheming, histrionic, fake. And piously intoning how sad and reluctant you are as you do it, when it seems that you are actually joyful, doesn’t make you look good and your target look bad, either.

This particular impulse for impeachment is similar to the one stated by Robert de Niro, who recently said the following in a conversation with Michael Moore:

“It would feel kind of good to punch [Trump]. Not hurt him. Just punch him in the face,” said Moore. “Just cathartic.”

De Niro responded, “I’d like to see a bag of sh** right in his face. Hit him right in the face like that, and let the picture go all over the world. And that would be the most humiliating thing.”

De Niro explained that he would like to see the 2020 Democratic candidate tear Trump down, even if it’s not in an “obviously physical way.”

“The people have to see that. For him to be humiliated,” De Niro said.

Yes, we get it: you want to see Trump humiliated. What a primitive impulse De Niro is describing here: a bag of excrement in the face. Why would an observer think less of Trump and more of De Niro and/or the thugs carrying out such a wish? Or even expressing such a wish?

If public humiliation is indeed a large part of the impetus behind the drive to vote to impeach Trump, so far most of the public doesn’t appear to be seeing it as much of a humiliation for him. Perhaps the left thinks that if they say often enough that Trump is wearing a badge of shame as a result of their impeachment vote, it will come true. Meanwhile, impeachment will have to serve as a sort of revenge fantasy for them.

The House did not impeach President Trump, the Democrats in the House did. There is a YUGE difference. They will find themselves on the wrong side of history. Absolutely.

I see it more as a humiliation and defilement of the Democrat party, part and parcel with their treasonous schemes and promoting the criminal scam of Marxism.

The scarlet “I” is the new “Red Badge of Courage”. What we say and do will brand us…let it be so. Much is not required of us now but may in the future. Life is a grindstone…whether it reduces you or sharpens you depends on the metal you are made of.

Even if they do the scarlet letter thingy, it will be a letter I with a *.

I think the I is for Irrelevant

There has to be a back story between PDT and DeNiro. Like PDT and Nadler. PDT hurt their feelings somehow. All this is just too, too personal with these two schmucks.

If this is all the Democrats can do, passing two articles of impeachment without a single Republican vote while the Federal judiciary is remade to a more constitutional footing, then wear the “I” with pride, President Trump. We aren’t tired of #Winning!

The ‘scarlet’ “I” will be rescinded at some point, and it will be relealed that pelosi and gang brought this action as a distraction to the cover-up of her, biden, kerry, obama, clinton, romney and the rest of the treasonous bastards looting our country via foreign aid kick-backs, among other massive stealing they are engaged in.

Trump is not a guy to go toe to toe with: not when he’s got an army as loyal as us.

I for insane
and
M for meshugas.

President Trump took the hit for us, never forget it, because they won’t

He’s orange, he talked about social liberal club, and his mommy dresses him funny. Impeached, yes.

Still viable. Not a Planned President, yet.

And now a climate change, or rather reversal, where the witch hunters and warlock judges are on trial.

He needs to be IEA’d.

What, did the House Dims impeach DJT?

I thought they’d just voted to do it, ahh, someday . . . and until they do Pelosi can talk it up without actually delivering anything substantive.

Not only are the D’rats shooting blanks, they’re not even firing their little starter pistol; they’re just waving it around.

It really burns my biscuits that we actually pay these people for this level of non-performance.

Trump is going to be the first president ever re-elected AFTER being impeached, and I doubt that it’ll be a close election.

I don’t think being impeached is anything close to a reason for Trump to feel shame, for voters to abandon him, or for historians to turn up their noses at Trump. The same bunch who are pretending that impeachment is a black mark on a president probably still regard Bill Clinton as an elder statesman. And anyway, Andrew Jackson was impeached, yet it’s HIS face we see on the $20 bill. So — yeah, Democrats, you just keep whistling past the graveyard and telling yourself that President Orange Cthulhu has been broken.

The left has allowed hatred to overtake their whole reason for being. This isn’t only about Trump. This is a reflection that they are attempting to stand for everything, which ultimately means they stand for nothing.
Trump fights back. That is something they are not used to, how dare a Republican not fold and cower in the corner when the mighty Democrats scold? And this impeachment is based quite a bit on believing Schiff, who cannot seem to tell the truth about anything.
Trump has exposed their corrupt game, at least to a point, and this impeachment is more about stopping the big nexus of corruption from being exposed. It’s a kill the messenger to stop the message from getting out.
Ukraine is a lynch pin moment for the left. I’m sure there are some of the right who will be burned, and rightly so, but the left were powered by the massively corrupt Obama. So it is his largess which fueled the Ukraine corruption and money laundering operation.
So, this impeachment is about cover up, for the accusers, not the accused. That makes it a badge of honor. And DeNinny is that bag of feces, just to clear that up.

Trump will wear his ‘badge of impeachment’ with pride — much as we deplorables wear ours.

Trump (or Branco) could turn it into a funny joke, as in: “Will you look at that. Pelosi is SO OLD she still uses Roman numerals.”

Pelosi is like an old boat without power being steered down stream by crazies. Like the communist party in Iran, welcoming the Ayatollah, Pelosi is positive that she is in charge as the telephone polls are readied for the nooses to be strung up and cheered on by her harridans, the squad. The noses are for her and her ilk.

Bob!
Hey, Bob de Niro!
Yes, you!
You’re such hot stuff, and you have some clever ideas. Why don’t you run?

The Democrats want to hang a giant asterisk on the Trump Presidency:
He didn’t win the popular vote – Hillary was liked by voters more than him.
He cheated to win the election anyway.
Impeachment is the cherry on top for them.

Is is just a “fake impeachment” if it not delivered to the Senate for a trial?