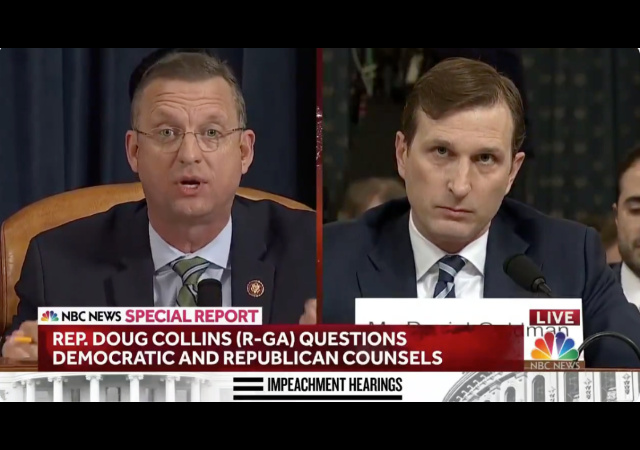 WATCH: Rep. Collins engages in tense exchange with Democratic counsel Daniel Goldman over how phone numbers made it into impeachment report:

Goldman: “I’m not going to reveal how we conducted this investigation.”

Collins: “And that’s the problem we have with this entire thing.” pic.twitter.com/6qyqa3LV2W

Pressed on who looked for Nunes’ phone number in the call information they received, which appeared to come from subpoenas the committee made to AT&T, Goldman said he would not address how they conducted the investigation. On why it was decided to include the information in the report, Goldman said it was peripheral evidence to the probe and that questions about the calls were better addressed to the individuals who were actually on the calls.

“I’m done with you right now,” Collins said to Goldman at one point when Goldman was trying to expand upon an answer. Minutes earlier, Republicans were criticizing Democrats for “badgering” their counsel, Castor.

Collins also pushed Goldman to say who authorized the release of the phone call information in the report, to which Goldman said he would not address specific deliberations of the investigation.

At another point, Collins criticized Goldman for suggesting Sondland landed his ambassadorship because he was a major Trump donor. Sondland donated $1 million to Trump’s inauguration.

“Mr. Goldman, you’re a great attorney, but you’re not Adam Schiff and you don’t wear a pin,” Collins said. Gaetz later jumped in, shouting at Goldman that Republicans “want Schiff in that chair and not you.”

In conclusion, Goldman tried to offer a closing statement in the exchange but Collins cut him off, saying, “you won’t answer my questions, so we’re done.

It must be nice being a liberal and the rules don’t apply. One minute your testifying and the next minute your asking questions. These losers have no morals.

When you argue with an idiot, you then have two idiots arguing.

When you argue with a criminal, you then have a criminal and an idiot arguing.

When one argues with a fool, the number of fools is doubled.

If today’s hearing didn’t end any consideration for impeachment then that person didn’t watch this circus.

And the poll showing Trump trouncing Biden in 3 battleground states should make the dems run to the nearest Depends dispenser and change into newer and dryer Depends.

Since the democrats have already drawn up their articles of impeachment to be voted on that makes it quite obvious that there will be no “minority day” for the republicans to control who the witnesses are. Not much of a surprise since they haven’t followed any of the other House rules including when the republicans also demanded their minority day in the Intelligence Committee that was also ignored. There shouldn’t be a single republican vote to impeach based on just the lack of following the House’s own rules in itself. Not surprising since Pelosi already also violated all her own rules based on multiple previous public statements on how there should NEVER be an impeachment based on all the rules they have already violated. They are desperate beyond belief which means it’s a good thing the republicans control the Senate to avoid even more acts of desperation that we probably can’t even imagine.
There was a time when we would already have multiple members of Congress dead or wounded when they used to challenge other members to a duel or beat each other down with a cane.
And then they wonder why so many polls show that majorities of all parties believe we are on the verge of another civil war. That alone is enough reason to vote for Trump so we know who is in control of the military although he’s still got a lot of Obama leftovers he needs to remove from the upper ranks.