“I don’t believe that poll for one second, the 90 to 77%. I don’t believe it. It makes no sense that that number would change like that . . . David, that poll is wrong. Just because I said so, okay?” 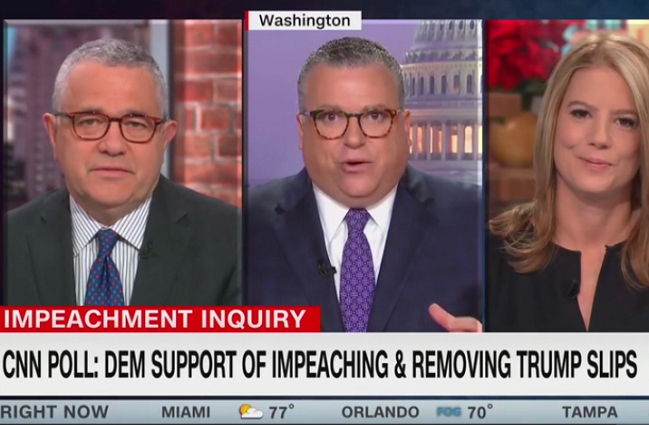 Every once in a while a story catches my eye because it just seems so ludicrous that I have to click over to ensure it’s accurate. This is one of those times.

CNN’s Jeffrey Tobbin, confronted with a CNN poll no less, is in utter denial that the Democrats’ misguided impeachment witch hunt is failing even among Democrat voters. Toobin, upon hearing that there is a double-digit drop in Democrat support for impeachment and removal said he didn’t believe it for “one second.” He declared the poll “wrong” because . . . he “said so.”

Psych professors: feel free to borrow our clip of Jeffrey Toobin on CNN this morning. It’s a perfect illustration of the Kübler-Ross model’s first stage of grief: denial.

Toobin simply refused to believe the results of CNN’s own poll showing a rather dramatic drop in Democrat support for impeachment: from 90% down to 77%. Note Alisyn Camerota trying to downplay the drop, claiming Democrat support for impeachment had merely softened “a little bit.” Thirteen percent ain’t little, Alisyn! If President Trump’s numbers had declined by the same amount, you’d be clamoring about his “collapse!”

. . . . The David in question was CNN political director David Chalian, who defended his own poll:

“I don’t know what’s not to believe. You call people on the telephone, you get their information. You pop out a survey. This is what those that we polled told us.”

Couple this CNN poll with the new USA Today poll showing Trump beating all contenders, and Democrats have something to sweat about today. It’s obvious there are Democrats who worry about backlash. Toobin can never believe when Democrats don’t fully back CNN’s agenda.

You can read the full transcript here.

The support for the impeachment and removal of President Trump is still immense among Democrats at 77%, but Toobin, like so many in the leftstream media and among the political elite, simply can’t fathom why the Democrats’ grossly unfair and obviously flawed attempts to impeach Trump are failing to sway public opinion.

Well, I suppose I should qualify that because public opinion is clearly being swayed . . . against impeachment and removal.

The poll was probably not wrong. The people of the United States of America love their due process of law, and they know when they don’t see it.

The “impeachment” showing by the Democrats was really that bad, and it came after a couple of years of lying, followed by the Mueller Report.

The Democrats and the newsies have ruined their own credibility, and what they see as ” impeachment fatigue” is more like disgust.

Toobin is on another planet. Or maybe wearing these virtual reality goggles. He is not alone. Oblivious that not everyone is like them. Disdain of any contrary view. This video would help them, but they seem incapable of rehabilitation and joining the rest of us.

Can any point to the last time Toobin was right about ANYTHING?

His greatest “accomplishment” was impregnating a colleague’s daughter.

I’m skeptical of that kind of change in polling, but it could be more of a correction type poll to cover for previous polls.
While there are a large segment of insane leftists on the Democrats team, most of us in this country believe in fair play. Any who care for this country should be alarmed at what Schiff and Nadler have done.
Even Mad Max knows there are no crimes, no case, in this sham impeachment, but her barely functioning brain doesn’t care because she knows he is guilty of something.
We on the right should be marching on Washington over this. This is a Constitutional crisis and I am not sure we can truly recover from it.
Too many corrupt agencies, too many corrupt politicians, and I fear too few indictments- if any will come from this.

I have a belief that people who hang around delusional media for a period begin to become the same. I mean I am saying TDS is catching.
I remember when I was very, very young that Republicans hated JFK. This hatred continued almost until this decade. But it was a delusion. JFK was not perfect, but he was not a bad president.He made mistakes. But what president can predict the actions of enemy countries? When old enough to think, and taking grad courses at Claremont Grad U., I realized there really was nothing to hate about the man. His imbecilic brother Ted, yes. But not JFK.

Personally, I believe it is hard to avoid delusional media. That means that there are basically decent people who have been mislead. Isn’t that is the whole point of propaganda?

And yet if the poll had shown a 20% slide in the other way, he would be doing the Happy-Happy Dance right there on camera.

…and still calling himself a neutral arbiter of the facts. His facts.

My analysis? Toobin’s glasses greatly contribute to his goofy appearance.

I think it’s reasonable to doubt polls that deal with Republicans and Trump. We all know that we lie to pollsters for a variety of reasons, but lefties typically want to virtue signal in public and do/feel/think another way in private (another reason polls slant against Trump). So when Democrats are saying they are against impeachment and removal, I take notice. I may not believe the numbers to the last inth, but I do think that these people are probably representative of the iceberg (the 1/8 we don’t see).

It’s probably related to how polls act as the date of election draws near.

“The Republican is so far behind, look how far behind he is, he’ll never catch up, the numbers are getting closer but the Dem is still way out in front, the gap is quite thin but the Dem still holds a respectable lead, oh the election went to the Republican by the razor-thin margin of ten percent now here’s Harry with the weather.”

Toobin in still thinks Hillary Clinton and her goulish new facelift are ahead by 95 percent.

What will he think when molotov cocktails start flying into his window after the first shots of the 2nd Civil war are fired in Virginia?

Toobin says, “Come on, It was a CNN poll! They know NOTHING!

“Don’t believe your lying eyes and ears! We’ve got the Russkis right where we want them!”

If I recall, the Republicans suffered similar drops in the polls after the Clinton impeachment even though they had abounding evidence he lied under oath.

I recall the Clinton impeachment, and figuring that he did what every man does about extramarital crap: lie through his teeth. Not admirable, but not impeachable either.

I felt the same way then and do now. Everyone knew Clinton was an adulterer and a player long long before he was ever elected president. But he was likable, and ultimately, he was malleable and listened to the American people. He “triangulated” because he’s an awesome politician and because he “got” what Americans wanted and where they were at that time and could humble himself as president without undermining his Office. He presided over the last balanced budget we are likely to see in the foreseeable future. And yes, that was down in large part to Newt’s 1994 conservative revolution, but Clinton went along. He didn’t have to, but he did because he’s not stupid (unlike his wife, who is supremely stupid). I wasn’t a fan of Bill Clinton, but he was a good politician who even, at least occasionally, put country over party.

The Democrats are trying to do this in reverse. They don’t like Trump or his policies or his campaign promises that got him elected, so they want to posit that him being him poses a serious problem to our national security, Constitution, or whatever. That’s bassackwards. Trump has done nothing wrong, and the policies he has enacted are any conservative’s dream. THAT is his crime, he’s undoing decades of regressive lunacy and must be stopped. No, he’s not guilty of anything else, but Democrats just don’t care.

Jeffrey Toobin thought that the polls that showed Boris Johnson way ahead were fake. So, when Boris won big, obviously it was the fault of RUSSIA RUSSIA RUSSIA!!!

Denial indeed. It was everywhere you looked on the Internet yesterday. The pride that cometh before the fall.

I think that WaPo dinner photo ((Merry Impeachmas) is already iconic and may well be featured in history books …much like the band playing on the Titanic.