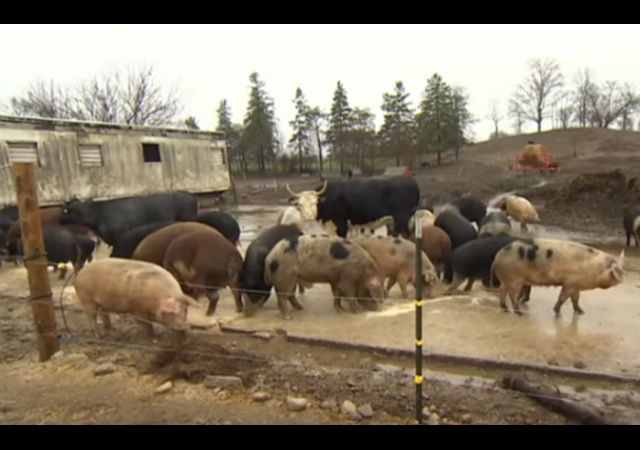 Chinese gangsters are reportedly using drones to spread African swine fever to scare farmers into selling their animals at a discount, then trafficking infected animals across province lines to sell them in “clean” areas.

Chinese state media reported last week that gangs were exploiting the African swine fever crisis by deliberately spreading the disease by using drones to drop infected items on to pig farms. The farmers are then forced to sell meat cheaply to the gangs, who then sell it on as healthy stock, according to China Comment magazine, which is affiliated to state news agency Xinhua.

In more common cases, according to the magazine, the criminals spread rumours about the presence of the virus to achieve a cheap purchase price.

Pork prices have more than doubled in China as millions of pigs have been slaughtered since the first case of African swine fever was identified in Shenyang in August last year. The disease is fatal to pigs but does not pose a threat to humans.

However, those who follow Chinese state media propose that there may be more to this story than greedy gangs known as “swine stir fry syndicates.”

Why would a state-controlled outlet publish a story about pig gangs? Likely as part of an effort to shift the blame for continuing high prices from the government handling of the outbreak onto isolated bad elements.

This year’s rise in pig prices is a big deal, materially impacting every Chinese national and likely shaking consumer confidence more than the trade war with the U.S. These sorts of own goals are growing pains for any developing country, but can especially damage a one-party system without transparency….

One translation note: 炒猪团 (chǎo zhū tuán), how these pig gangs are known, is a wonderfully evocative phrase. 炒 literally means “fry,” but is also used in the phrase 炒房团 (chǎo fáng tuán) to refer to those who hoard real estate only to sell at the peak of the market.

Chinese pig farmers have taken to jamming drone signals to protect their herds.

One of China’s biggest animal feed producers said it had used a radio transmitter to combat crooks using drones to drop pork products contaminated with African swine fever on its pig farms, as part of a racket to profit from the health scare.

…Answering questions from investors on an interactive platform run by the Shenzhen Stock Exchange, Dabeinong confirmed on Friday that its pig farming unit in Heilongjiang province had unwittingly violated civil aviation rules.

“We broke related radio regulations, although that was unintentional,” said Dabeinong, adding that it had surrendered the equipment to authorities and was willing to accept a penalty.

It’s a good thing that phase one of the trade deal between the US and China is moving forward, despite the assessment that the Americans have the upper hand on this deal.

The nine areas outlined in the 86-page document China released are largely about how it has to make changes – in other words, the accord is a must-do list for Beijing. In the tariff war, Washington apparently has the upper hand as the US has imported much more from China than vice versa. Thus Washington slapped tariffs on US$550 billion worth of Chinese products, while Beijing, in turn, lashed back at US$185 billion worth of American products – with the sum of both figures equivalent to about the entire trade volume between the two countries.

…It would be a big political victory for Trump himself as the “massive purchases” of agricultural produce from the US will be a big boost to his re-election campaign.

It has been reported that China has lost 40% of its pigs during the epidemic so that the trade deal would be a big win for both countries.

It does appear that one of the 4 horsemen of the apocalypse has upgraded his tech skills for the new millennia.

Now we know why China lifted tariffs on certain US pork products.

Given tne chi comm affinity for genocide, it’s surprising there are gangsters not in league with chi comms.

I’M REALLY SHOCKED THAT THE CHINESE HAVEN’T EXPORTED PIG EBOLA TO AMERICA, MAYBE THAT WILL BE THEIR NEXT LITTLE DIRTY TRICK. OR, MAYBE THAT’S THE GIFT THAT “ROCKET MAN” HAS FOR US THIS CHRISTMAS…