Mack has given so much this year. 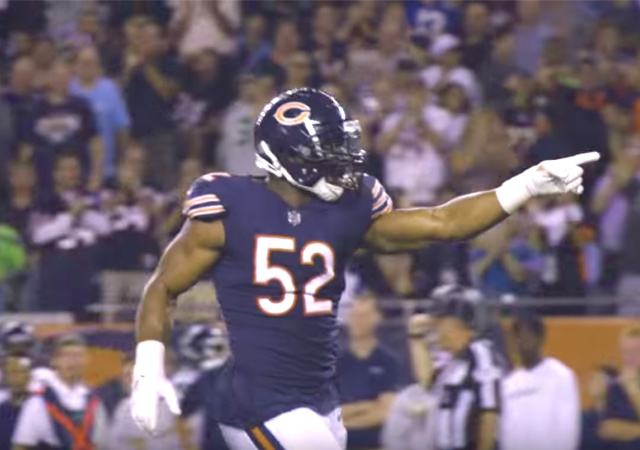 As I watch my beloved Chicago Bears take on those putrid Green Bay Packers, I remember that Bears superstar Khalil Mack did something amazing last week.

Mack paid off all the items on layaway at Walmart in his hometown Fort Pierce, FL.

The payment came from his Khalil Mack Foundation:

“We here at Walmart would like to thank the Khalil Mack Foundation for your generosity, and for making so many families happy for the holidays,” the Fort Pierce store posted. “Everyone is truly grateful for everything you have done for them!”

“His foundation came to us and said he wanted to be a secret Santa,” store manager Mathias Libardi told TCPalm.com.

The holiday gift isn’t the only good deed Mack has done for his hometown recently. In June, he sent 100 pairs of Nike cleats to the Fort Pierce Westwood football team.

So Mack sent the Nike cleats in June, but the man has done so much this year.

Mack found out two weeks ago that the Chicago Chargers’ U14 Pop Warner football team needed money to travel to the Disney National Championship.

Mack also donates quietly, not looking for attention. His generosity receives attention because the recipients talk about it.

We need more of this. As people and the media prop up people like Colin Kaepernick they should turn their eyes to players like Mack.

Then again, Mack and others do not want the attention. They do not donate or help others to show off. They do it because they are good and decent people.

Love you so much, Mack. AND BEAR DOWN!

Good to see someone who walks the walk as compared to Kaepernick who just talks sh|t.

There are many good people in our sports community that continue to do generously and upstanding behavior.

One unfortunate axiom of life: One aw crap wipes out a dozen attaboys. The dinosaur media will cover the poor actions first.

To bad he didn’t save a little money to pay off the ref to offset the bribe the peckers gave to get that game changing call.

Can’t help the Bears have a losing record… as usual

As an added bonus Mack does not throw interceptions to defensive linemen. Da Bears!

I presume that you are making reference to that very funny sketch from SNL, back when it was a very funny show.

Very nice. But as wealthy as he is, it’s probably comparable to my donating $100 to some charity.

It’s better than nothing, but this kind of gift feeds right into the disfunction of the people he is being giving to.

Give a poor person a WalMart credit, and you buy them a television, in front of which they can vegatate all day. Teach them how to earn money to pay WalMart upfront, and they can buy their own television(s), and they will be less likely to vegetate in front of one all day.

The beneficiaries of Mack’s gift will learn nothing from it. Quite the opposite.

Is what I said untrue? Personally, I get a little tired of multi-millionaire sports stars (I’m particularly thinking of Lebron James) who donate what amounts to perhaps the equivalent of an hour’s wages and then their acting as if they are truly being charitable (not to suggest Khalil Mack is guilty of this). Compared with what they earn, what they give, though very helpful to the recipients, is crumbs. Not all, but many if not most. It’s a pet peeve of mine.

This comment section is a sizable collection of bad takes

In light of the poor morals of so many professional sportsmen, I’m thrilled to see genuine charity from one.

I hope others look in the mirror, find the comparison unflattering, and take his example to heart.

Well, looks like the “secret” part is a bust.