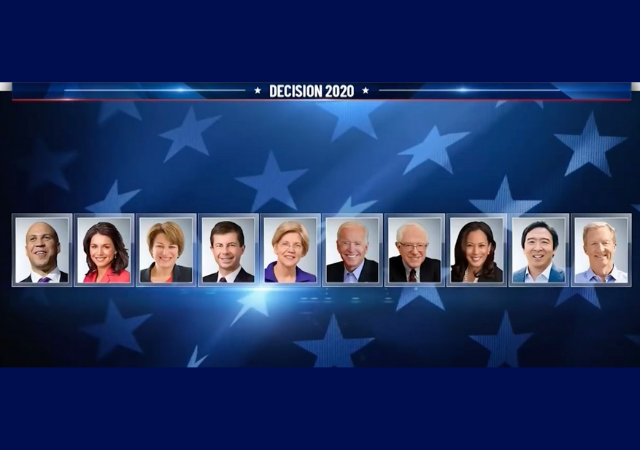 Welcome to our Democrat Presidential Debate open thread. Refresh often for the latest. The fifth Democrat presidential primary debate is taking place in Atlanta, Georgia and began at 9 PM ET.

The breakdown, from the NYT:

The debate is 9 p.m. to 11 p.m. Eastern time. It is being held in Atlanta and co-hosted by MSNBC and The Washington Post.

There will be no opening statements. Candidates will have 75 seconds to answer questions from the moderators: Rachel Maddow of MSNBC, Andrea Mitchell and Kristen Welker of NBC and Ashley Parker of The Washington Post. Each candidate will have 45 seconds for rebuttals or follow-ups, as well as a 75-second closing statement.

Was only a matter of time:

Looks like the wires are already starting to short out for Joe Biden and the debate just started pic.twitter.com/5GPgx4aF9V

20 minutes into the debate and Gabbard, Yang and Steyer haven't gotten time to speak yet

45 minutes into tonight's #DemDebate, Elizabeth Warren has spoken the most of any candidate, followed by Joe Biden, Bernie Sanders and Pete Buttigieg.

DNC drops its October FEC report in middle of the debate: $8.7m on hand, $7m in debt. https://t.co/VUUBeNl9cP

"I'd say I’m sorry I beat your guy,” says Yang after being asked what he would say in his first call with Vladimir Putin. pic.twitter.com/6jYsjcNEyG

!!! Cory Booker to Joe Biden: “I heard him say I don’t think we should legalize marijuana. I thought you might have been high when you said it.” #DemDebate

You couldn’t pay enough to listen to any of their treasonous drivel!

Is it really treason if no one is watching (or listening) to the debate? Kinda like a tree falling in the forest isn’t it? 🙂

Well there is a new Grand Daddy on stage tonight.

Hey, How come my favorite Democrat wasn’t included. My man, Mitt Romney would clean-up in the primary. How come he hasn’t been included? At least one of the outspoken democrats should be included. If not Romney than how about Collins or Murkowski?

If only Chelsea had enough time to campaign. Or, maybe she is waiting for her mom to “step up” and save a basket of deplorables from themselves.

Alas, as it were, Hillary has never had a better recommendation than Fauxcahontas.

So Yang says if he’s elected, he’ll end foreign interference in our elections.

Yeah, so either he is the dumbest man on earth, which I doubt since Beto and Swalwell are still breathing, or this was a stupid, pandering, statement. In either case, his supporters are even dumber.

I have been watching and I can honestly say that I have never seen a bigger bunch of Idiots.

I don’t think Gabbard and Harris like each other too much.

Biden stands there like a corpse until he is asked a question and somebody pulls his Chatty Cathy string and he babbles on about something or other.

Butt is in way over his head but that is probably not an unusual position for him to be in.

Booker sounds like the typical ex-jock who thinks he is smart because he got an A in Basket Weaving.

Yang and Steyer probably need to get a room.

Kobuchar’s hair bounces around every time she speaks I am wondering if she has some neurological issue.

And Warren is as ditzy as ever.

And Bernie is just being Bernie.

Did Tulsi get better prep this time? Has she landed any solid hits? She has the same basic policies as the others, but comes across as a normal human rather than another either a Robot Of The Party or a Reaching Apparatchik.

This was essentially the Elizabeth Warren Show. Probably the least effective of the debates so far, especially with the poor quality of moderators, questions, and responses.

Did they include Andrea Mitchell so that there would be someone on screen who looks older than Joe, Bernie and the Fake Indian?

Who wants to watch four adoring women Democrats who forget that they should be journalists, asking cream-puff questions of the candidates to try to make them look good. One after the other, the candidates promise to give away whatever they think might buy votes: Free college, free health care, open borders, whatever.

The moderators help their favorites by allocating how much time they get on camera. So far, they’ve shown a clear preference for Pocahontas. The moderators don’t want say that she speaks with a forked tongue when she says she’ll pull free health care out of her hat.

If Elise Stefanik were one of the moderators asking questions, that might make this charade interesting.

You COULD pay me to watch it. But it would cost you.

Let me see if I can accurately summarize it:

You saved me so much time!

These Democrat talking points are much easier to take after the fact and then reading the pundits.

You can tell the DNC and their propaganda wing really, really really want a specific squaw in there. I don’t think they realize that Trump would love nothing more than 6-9 months of a single target Lieawatha too.

Steyers fall should be a warning to Bloomberg that he won’t be able to buy his way into the hearts of the ANTIFA & Bernie Bro left either.

Let Gabbard on the stage but give her no time. Seems fair.

Tiny amounts of time is a feature not a bug for Gabbard. She’s a pretty air-head. Pull her string and she will slowly tilt her head from side to side and say, I was a major in the National Guard! Pull it again and she will say, “During my time in the military..” Looks like the added, “Hillary Clinton is corrupt” to her voice box. If they ask her too many questions, she might glitch out.

Heh, I think it will just recycle from the beginning.

I think she has a deal with Biden…

Is there a link to a complete transcript? That’s the only way I can go, not being inclined to actually sit through that shit.

I can picture a Branco cartoon of this debate: The four “moderators” in their cheerleader outfits leading a big “Orange Man Bad!” cheer as the candidates enjoy a love-fest on the stage.

This “debate” was a sham. The network cheerleaders avoided any topics that might lead to a real debate.

Joe Biden Threatens Lindsey Graham For Proposing a Senate Inquiry Into Ukraine; Promises That Graham Will “Regret His Whole Life”
—Ace of Spades