“Although motivated by good intentions, I believe we made a mistake this year” 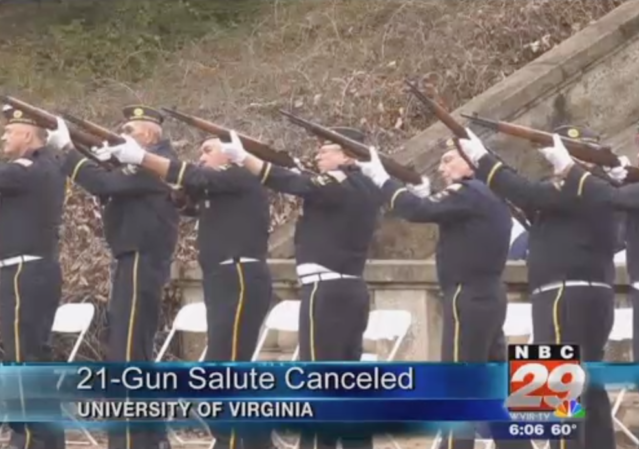 There was apparently some strong blow back over this. Well, there’s always next year.

Shortly after announcing that it would be doing away with its long-held tradition of incorporating a 21-gun salute on Veterans Day, the University of Virginia has changed course and will be reinstating the salute in next year’s ceremony.

University president Jim Ryan stated Saturday that next year’s ceremony will include the salute, calling the decision a “mistake” that was “motivated by good intentions.”

“Sometimes you make mistakes. Although motivated by good intentions, I believe we made a mistake this year in excluding the 21-gun salute from our Veterans Day ceremony. Having attended the ceremony, and having consulted with the Commander in charge, I am confident that we can accommodate a 21-gun salute, which had been a meaningful feature of the ceremony in years past,” Ryan wrote in a Facebook post.

“We will therefore reinstate the 21-gun salute next year, and we will make sure to minimize any disruptions to classes and communicate the details of the ceremony in advance. Thanks to all who shared their views about this topic, and my sincere apologies to any who may have doubted our commitment to honoring our veterans, whom we hold in the highest esteem and who deserve our gratitude,” he added.

Trying to have it both ways—surrendering to the snowflakes but pretending not to. Cheap and shabby.

It is always a mistake to surrender to a snowflake or a leftist.
Appeasement is “well intentioned” behavior? Appeasement is easy unless held accountable.

It’s easy for college faculty and administrators to surrender to the far left because that is where their sympathies lie.

Good to hear that he was getting significant backlash for his cowardice.
May it continue until they restore the university to sanity.
Come on alumni. Put the pressure on your alma maters to stop the insanity!

Recognition of your idiocy is the first step.

When my uncle was buried after retiring as a Lt. Col. in the Air Force after joining for WWII, the service supplied a 21-gun salute at the grave side. If you are going to honor veterans as a whole, it cannot be seen as other than vile disrespect to omit the salute. So-called “well intentioned” appeasement is what led to WWII. It is cowardice.