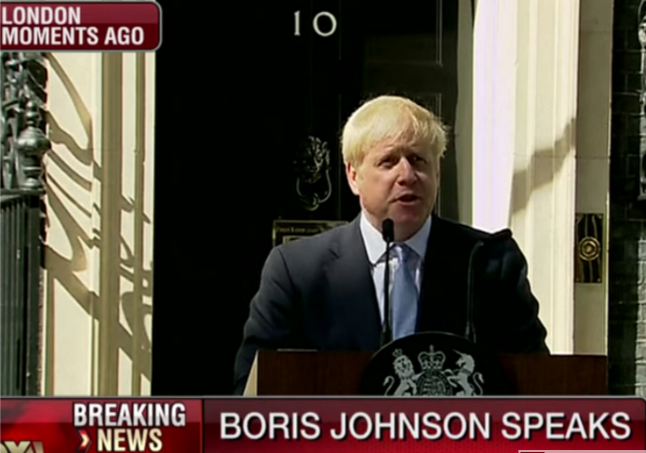 The UK Conservative party’s lead is narrowing in polls as Remain parties enter an election pact to defeat Prime Minister Johnson and prevent Brexit ahead of the December 12 general election. The pro-EU Liberal Democrats and the Green party are targeting specific constituencies to maximize their chances of entering the parliament. The so-called ‘Remain Alliance’ is targeting “dozens of seats across the UK in an all-out bid to block Boris Johnson and Brexit,” the Daily Mail reported Sunday.

Prime Minister Johnson’s projected lead over the rival Labour party has almost halved, dropping from 16 percent nearly two weeks ago to just eight percent. The Conservatives could still muster a majority of 50 seats, polls on Sunday show. However most of these 50 seats are in the so-called ‘marginal constituencies” which “have never elected a Conservative” lawmaker, UK newspaper The Sun noted.

While the pro-EU Remainers are busy mobilizing, the chance of a pre-election understanding between Prime Minister Johnson-led Conservatives and Nigel Farage’s Brexit Party is diminishing by the day. The UK Prime Minister “again dismissed the prospect of an electoral alliance with Mr Farage,” the Daily Mail reported on Sunday.

The Daily Telegraph reported the latest polls taken over the weekend:

Boris Johnson’s Conservatives are only eight points ahead of Labour, according to a poll for The Sunday Telegraph.

The ORB International survey for the newspaper puts the Tories on 36 per cent, with 28 for Labour, 14 per cent for the Liberal Democrats and 12 per cent for Nigel Farage’s Brexit Party.

Undertaken on Wednesday and Thursday, the new poll is likely to spark concern within the Conservative campaign.

Experts warned that Mr Johnson will need to significantly increase his lead to be sure of securing a majority.

Farage, who led his Brexit Party to a stunning victory in the EU parliament election in May, has offered to pull out hundreds of party candidates in favor of Prime Minister Johnson’s Conservatives. After being rebuffed by the Conservatives, the Brexit Party is now fielding around 600 candidates in a 650-seat contest. On Sunday, Farage revealed his decision not to run for the parliament. He will instead focus on campaigning for party candidates across the country.

President Donald Trump, who openly backs Brexit, called on Farage and his Brexit Party to get behind the Conservatives in the coming election. Talking to Farage on Thursday, the U.S. President described the British Prime Minister as the best man in place to get Britain out of the EU. “He’s a fantastic man and I think he’s the exact right guy for the times.” President Trump told Farage on Farage’s LBC radio show. “And I know that you and him will end up doing something that could be terrific. If you and he get together it’s, you know, unstoppable force.”

The division of the vote between the Conservatives and the Brexit Party could prove to be a major flaw in Prime Minister Johnson’s election strategy. While the Remainer parties are mobilizing their pro-EU vote, the Conservatives are failing to consolidate the pro-Brexit vote.

There was never any intent to let the citizens of the UK determine their own future or allow them to actually retain their country….never….

what’s astounding, and yet totally predictable, is that Farage looks like he’s going to be the one who destroys Brexit. He does this kind of thing over and over again.

And yet what choice is Johnson leaving him? Just to back down unilaterally and give up the fight, in return for nothing?! He’s in a tough situation without any good options.

Give up what fight? The fight the Brexit Party initiated by coming out with a platform with many areas of disagreement with the Conservatives. That’s not how you win.

Those two had better get together and only run once candidate between them in each constituency. Brexit Party running a full slate would be a disaster.

That’s the same “all or nothing” unreal ideological purity that almost uniformly ends up with “nothing.”

And don’t forget the backlash that will result from Trump jumping into the mess.

Oh, will he now be called a Russian Bot for being a foreigner uttering a non-leftist position?

I have to agree with Milhouse, Farage offered to pull 600 candidates (or at least convince them to pull out) in favor of Conservative Party candidates, and Boris Johnson snubs him. Boris might as well have told Nigel to “sod off”. Under the circumstances what do you expect Farage and the Brexiteers to do? Do let us know your thoughts on that particular question, preferably in depth and detail.

The pollsters. The BBC. The Tories. The Brexit deniers. The EU.

What’s with these politicians who think they don’t have to respond to voter instructions? This is similar to California.

It’s almost like they think they are nobility, instead of elected officials with a responsibility to the voters.

What do you mean? They’re having an election, and the new Parliament will decide what to do. If the Remainers win, they will certainly not be bound by the result of the referendum a few years ago — why on earth should they be? They will have been given a mandate to abandon Brexit altogether. If the Leavers win then they will do as they see fit, having been given a mandate to see Brexit through. Either way, the referendum itself cannot be binding on Parliament.

Well, the Parliament has certainly shown the people that the referendum had no impact on the Parliament and the politicians felt no need (or desire) to take the views of the people into consideration when weighing the issue of Brexit (or probably anything else). It was supposed to, but that was then and this is now.

IF the people install a Parliamentary majority opposed to Brexit, then Brexit is absolutely dead – and the people and Boris Johnson will be responsible. Johnson will be blamed for killing it by his refusal to work with Farage. This even after Farage pledged not to run for office, which should leave Johnson in a position to form a government if the Conservatives and Brexiteers form a clear majority.

I suspect many of the people have decided that it doesn’t matter what they want, or vote for, there will be no Brexit so they might as well give up (the Brits tend to be a bit more docile than some of us).

The election is Dec. 12. I expect a major political announcement and move by the Leave candidates about 2 days before, now that Remain has shown their hand.

I am puzzled by Johnson’s actions. It’s almost as if he’s running to institute a sham Brexit (BrINO). The Brexiteers have got to get their act together and get people to vote the way they did in 2016.

2016 was a referendum. This is a general election. The parliament that will be elected will have a mandate to do whatever it sees fit.

Being deliberately obtuse here Milhouse? You know exactly what was meant, or did you miss the figurative elephant in the room?

How do they do that if there are three candidates in their constituency: a Conservative, a Labor, and a Brexit candidate?

Are we to believe the polls?

I don’t rely too much on polls myself. But they are showing a general trend ahead of the UK general election.

When the “Conservative” Party fails to do what it promised to do, of course they’re going to lose support.

I have to excuse some of that as Johnson’s good-faith effort to bluff his way though.