Farage: “The Brexit Party will not contest the 317 seats the Conservatives won at the last election.” 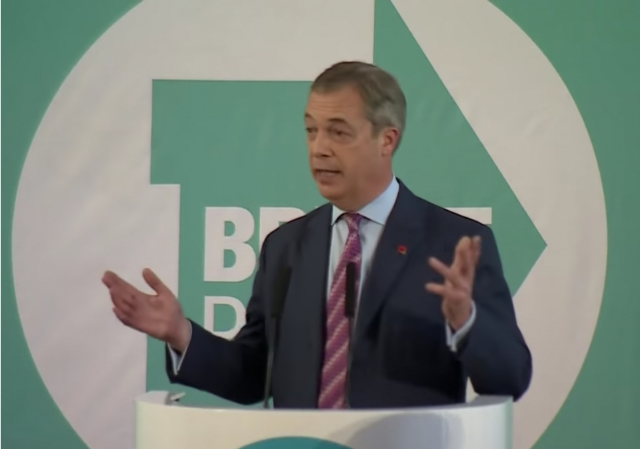 In a massive boost to Prime Minister Boris Johnson-led British Conservatives, Nigel Farage has pulled hundreds of Brexit Party candidates ahead of the December 12 election. The Brexit Party will not field candidates in all 317 seats that the ruling Conservative party won in the last general election.

“The Brexit party will not contest the 317 seats the Conservatives won at the last election,” Farage said. “We will concentrate our total effort into all the seats that are held by the Labour party, who have completely broken their manifesto pledge in 2017 to respect the result of the referendum, and we will also take on the rest of the remainer parties. We will stand up and fight them all.”

Farage, who announced last week that he was not standing for election himself, had been campaigning to get Brexit Party candidates elected to the next parliament. After today’s announcement, he is expected to concentrate on pro-EU lawmakers from the Liberal Democrats and the Labour party contesting from vulnerable seats.

Nigel Farage has sensationally backed down on his threat to stand Brexit Party general election candidates in every constituency across Britain, announcing the party will not fight the 317 seats won by Tories in 2017.

The move, which he termed a “unilateral Leave alliance”, represents a massive boost for Boris Johnson’s Conservatives in the battle for the 12 December general election, removing the danger that they might lose seats by splitting the pro-Brexit vote. However it could mean Tories face a tough battle to pick up Labour-held seats, where traditional supporters of Jeremy Corbyn’s party who support Leave will have the option of voting for the Brexit Party.

Responding to the announcement, Mr Johnson told Sky News he had “absolutely not” done a deal with Farage, adding: “I’m glad that there is a recognition that there is only one way to get Brexit done and that is to vote for us and to vote for the Conservatives.”

The announcement came shortly after Prime Minister Johnson promised a Brexit by 2020 and to secure a Canada-style trade deal with the European Union. Johnson welcomed Farage’s “recognition that another gridlocked hung Parliament is the greatest threat to getting Brexit done,” adding that “only a Conservative majority can get Brexit done by the end of January with a deal that’s agreed and ready to go.”

The Brexit Party had the potential of costing Prime Minister Johnson the election, a “wargaming” simulation conducted by the Daily Telegraph concluded on Monday. The newspaper predicted, “Nigel Farage’s Brexit Party could decide [the] election by denying Conservatives 90 extra seats.”

Johnson’s Conservatives, who hold a comfortable lead over their main rival the Labour party, have seen the victory margin narrow in recent weeks. The pro-EU Liberal Democrats and the Greens have floated a “Remain Alliance” to thwart Brexit in case the Tory’s fail to secure a majority in next month’s election.

Farage’s election decision paves the way for a decisive Conservative victory. Johnson now has to stand firm on his key promise to withdraw the country from the EU and mobilize the unified pro-Brexit vote.

Seems like an astute political move in order to get the number one goal accomplished – Get Out of the EU.

He might have been worried about his candidate selection process. I saw over the weekend that one Brexit party candidate asked for her name to be removed from the ballot, because she was an alien. No, no that kind of alien, she said she couldn’t run because she was actually from a planet circling the star Sirius, and she was only visiting here.

It’s a good move and I hope it works. Getting as many Remainers out of parliament is needed if those who voted leave want any chance of actually pulling Brexit off.

But that’s not what it does. What it does is split the Leave vote in all seats not currently held by the Tories, which means the incumbents are likely to win all those seats.

It’s too bad then that Johnson can’t compromise a bit in those constituencies. Because the Tories were losing those seats and maybe the Brexit party would do better there.

Tories weren’t losing those seats. Labour did well at the last two elections, which means they hold a lot of marginal seats that could be won back from them. But splitting the vote makes that much more difficult.

Good move for the Conseratives; to the extent that the Brexit Party was not a single-issue group and wanted a future, it hurts them. But if all Nigel wants is to get Brexit approved, then this is indeed a smart play.

But what he gets is Johnson’s Brexit, which he’s said he’s unhappy with.

I have no sense of what is going on over there but it seems to me that his pushing this to this point was the right thing to do. Farage has ignited an omnipresent roaring flame that will transcend the election as a background threat to those who will dare tell the voters to go to hell.

It may take Farage out of the current picture but he the movement he started may not yet have peaked. In fact, this will leave the Remoaners and their enablers worried about the monster lurking in the darkness.

An even smarter play might be to restrict his candidates to constituencies where Tories may not be on the ballot, so as to avoid splitting the Brexiteer vote.

“We will concentrate our total effort into all the seats that are held by the Labour party, who have completely broken their manifesto pledge in 2017 to respect the result of the referendum, and we will also take on the rest of the remainer parties. We will stand up and fight them all.”

There aren’t any seats where the Tories aren’t on the ballot, or at least the only such seats are the ones that cannot be pried out of the left’s clutches under any circumstances. This move prevents any Tory gains.

I think everyone has missed something very important that Farage said. look carefully at his words – “We will concentrate our total effort into all the seats that are held by the Labour party…”

Labour only holds 243 seats currently, leaving over 400 for the Tories to contest without interference. 325 is all that is needed for a majority, and they currently hold 317. (after Boris kicked about 20 members out of his party) So there is still plenty of room here for Tory gain. As for the Labour seats – it would be wise for the Tories to not put any resources into contesting those seats, and instead let Farage have a go at cracking them.

You forgot the rest of the sentence: “…and we will also take on the rest of the remainer parties.” That means the Lib-Dems. As in the Labour seats, if the Tories and the Brexiteers run separate candidates that blows away any chance of defeating the incumbent.

Unlike the Virginia GOP, which spotted the Dems 10 of the 20 seats they needed to take over the VA Senate, the British Conservative party is far more disciplined, and contests EVERY seat in England, Scotland, and Wales–no matter how hopeless. They stay out of Northern Ireland, though, given the byzantine local conditions there.

They should stay out of Northern Ireland completely i.e. cede Ireland to the Irish.

Why? The Northern Irish don’t want to be part of the Republic. They are part of the UK and want to remain that way, and it would be wrong of the UK to abandon them.

Johnson needs to build a big tent coalition to push Brexit through, and unfortunately Farage’s party has been successfully portrayed as incompetent xenophobes. Any formal arrangement would close off a lot of moderate support.
I would wager, though, that there’s an informal arrangement that opened the door to this ‘capitulation’ by Farage. It even helps Johnson with the moderates because it shows that he’s dominant.

This is the right move if Nigel really supports Brexit, but at the same time I am surprised he did it. I sometimes think Nigel’s ego gets in his way.

LOL, you don’t get out much do you?

I know what is passionately stated position is. I think you may need to take some reading comprehension classes. My point is that if he is truly pro-Brexit he will step aside to promote what is best, and he did. My other point is that I sometimes suspect his ego gets in the way of doing the right thing. He threatened to field a full list of candidates if Johnson didn’t team up with him, and Johnson didn’t. I suspect others behind the scenes made Nigel aware of destructive such a position potentially was.

The one thing with Farage is that he might see his hard stance as keeping the Conservatives honest and away from compromises that would undermine a true Brexit. Extreme positions, especially held by people who seem unreasonable and a tad bit crazy, do a great job of anchoring the Overton window.

” I think you may need to take some reading comprehension classes.”

I’d suggest you should take some writing and logic classes.

Oh and you were “surprised” that he did something that would support Brexit.

Nigel is the Winston Churchill of Brexit.

Unless you have no coaching ability…

This is a nothing move. Where the Conservatives need to out perform the enemy is in the areas labour currently holds but by continuing to run candidates in those areas does mean the leave vote gets syphoned off and just guarantees labour holding those seats.

mailman, can you explain further? It’s not clear to me what you mean.

Brexit Party is only refusing to contest seats currently held by Tories. Seats the Tories need to gain, however, Brexit will still contest, including seats where staunch pro-Brexit Conservative Party candidates are on the ballot.

Result: Boris Johnson keeps the seats he has, but may have trouble gaining new ones because the anti-Remain vote gets split and — due to “first past the post” — the Labourites have an easier time holding those seats.

Yea, That I understand, although it’s not clear to me that conservatives can win additional seats now held by labour. But I take your point, the Brexit vote *might* get split. This is where a case by case analysis of each seat should be made. If the tories have a weak candidate, put a strong one up.

I suppose Farage wants the Conservatives to withdraw their candidates for those seats, reasoning that if they can’t win them, let Brexit party try.

Seems reasonable: Conservatives run for seats they have, Brexit party runs for the rest and maybe has a better chance at them.