Reruns never do as well. 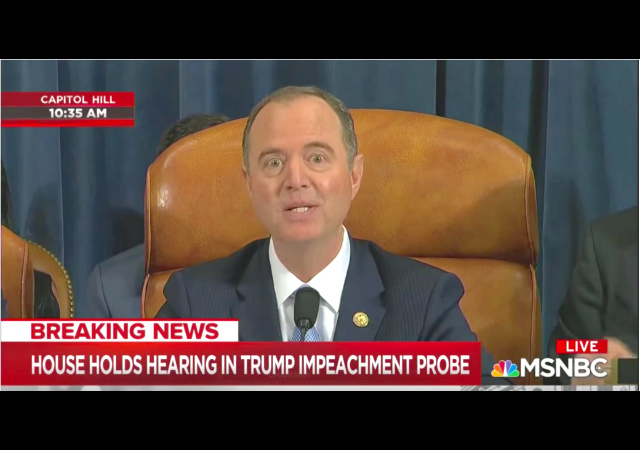 Fatigue from Trump Derangement Syndrome? The first day of impeachment hearings only brought in 13.1 million viewers.

The number becomes bleaker considering how many channels carried the hearing.

The numbers for these major hearings have declined since the Comey hearings:

The 13,098,000 who tuned in on ABC, CBS, NBC, Fox News, CNN, MSNBC, CSPAN and PBS marks a 32 percent drop from the number of people who watched James Comey’s testimony to Senate Intelligence Committee in May 2017, which delivered more than 19 million viewers.

All audience numbers are according to Nielsen Media Research.

ABC, CBS, and NBC aired “impeachment coverage between 9:50 am and 4 p.m.” ABC brought in 2 million viewers.

All of those stations will air the second day of hearings on Friday.

A 32% drop is what you expect for the sequel. And Ukraine is the third entry in the franchise at least. And it’s more like a mini-series. Will ratings go up as more people tune in or was episode 1 the high point? We’ll find out. https://t.co/iJFfOeJ8YW

I’m a good example of why the ratings have dropped. I watched the other ones: Kavanaugh, Mueller. Even downloaded both volumes of the Mueller report and read them. Ordinarily, I have a strong preference for primary sources, but I think the impeachment is such a god damn waste of time that I’m relying on snippets of coverage.

I’m critical of Trump in some respects and have made no bones about that on LI. But I am absolutely in his corner when he calls it a joke. Schiff is a national punchline. This will not end well for the Ds or their media shills.

Breaking news: Have you heard? Alaska is warmer than much of the East and Southeast U.S. I wonder how Global Warming got things so screwed up. But since I am in Alaska, I will take all of it I can get.

Now back to the “DC soap opera,” because I need a nap.

At this point I’m pretty convinced that Schiff has been lying to the Democrats about the ‘evidence’ that he has.

He convinced them to walk the plank based on this laughable weak tea, just to feed his own ego.

If the Democrats were smart they’d get rid of Schiff for putting them in this position.

But they’re not and it’s too late anyway.

A day or two more of this snore fest and Pelosi may pull the plug on impeachment.

If the Dems tried to get rid of Schiff by kicking him off the Intel committee, two bad things would happen.
1) There’s no guarantee he doesn’t have dirt on the rest of the Dem leadership, and this would give him incentive to use it.
2) It would be an admission that the Dems were *wrong* and they’ll never admit it.

So no, won’t happen. This house is burning all the way down, and the Dem Fire Department is too busy measuring the doors and writing tickets to squirt any water on the blaze.

Did you hear Pelosi spewing the lies today over what this is about? When she lies of late she stammers a lot. She used to lie like Slick Willie, but not so much anymore. I think they were duped by Schiff but they have painted themselves into a corner and I don’t see how they can back out now.
They will frame this attempted coup failure as partisan politics in the Senate but I’m wondering if she can keep her House idiots in line given the thin gruel Schiff is offering.

All the pundits on Fox early on this morning are saying the Dems have their “credible witnesses” next week. Who might those folks be?

I’m sorry, not sorry… Schiff, even in his natural state, looks like a cartoon character.

Did you see this parody? It’s a perfect use of Alinsky’s Rule #5. https://www.youtube.com/watch?v=NW23WQQlybM

Adam Schiff has dead children in his basement. look at him … you just know.

Harry Reid buried them there.

He hit himself in the face with a shovel while digging. That accounts for his eye injury.

Schiff has now put Pelosi on the hook and I don’t think she likes it.

What’s the over/under on when Pelosi pulls the plug? I give it a week, tops.

Her comments today made that nearly impossible. I don’t see how she can walk it back after todays lies. She threw herself full hog on the Schiff Bag Show.

Viewership isn’t the point. It’s all the coincident coverage and chatter about it that matters. And unless we poor, suffering average Americans are willing to abandon almost all TV and media, we will be force fed everything we tried to avoid by not viewing the Kabuki theater.

In that sense, it is somewhate successful for the never Trumpers and the media.

Not really. Most folks I know only watch local news. News sources are available that cover the news in a number of places around the world. Many of them cover in a more unbiased manner than our national news. I’m fully capable of browsing a website and controlling myself and ‘not’ clicking on what is clearly clickbait from the democratic party controlled media.

Local news is not much different when it comes to obsessively covering this administration.

i chewed the ends off all my pencils

Let’s all watch the wannabe Geek Drama Queen make up stuff and attempt to void an election. NOT!

This fool/tool is in way over his head, legally and intellectually.

I haven’t heard of anything I have any interest in watching on rerun, though I enjoyed the photo of the sign.

But! If they actually impeach, I’m sure once the hearings move to the Senate and Trump the showman is allowed to actually have his people participate that would change.

I’m not sure if that’s bad or good. Trump can be remarkably random.

If it gets to the Senate, I might watch it there. At least there will be two sides.

The Schiff Show ratings suck in San Antonio, they are measly in Memphis, bombed in Birmingham and aren’t doing all that great in Great Falls. Couldn’t happen to a more deserving little weasel.

Did anybody really think that the “Evil Woody” could make it happen ?

Woody: [Voice box] There’s a Snake in my Boot!

I’ve been following loosely, more because it is a train wreck that you can’t look away from- and you thought couldn’t get worse than the Kavanaugh confirmation, but it does.

This is like watching the 0-9 Cincinnati Bengals play to rabid fans every single game, even on the road believing that they are the march to the Super Bowl. Did you see how many times our quarterback gets sacked? Let’s show the reruns again!! And how about all those fumbles! Super Bowl here we come!!!

Haven’t watched a second of it, nor will I listen about it on the radio.

Im happier, and I love our president, despise and mock the left and its enablers.

I can’t believe the Dems don’t grasp how bad this is going for them among the majority of their own voters. A year ago, my many liberal friends would have been triggered by the very mention of anything Trump. If the last couple of weeks are any indication, I’m believing that most of them are going to vote for Trump.

Some, or maybe most, of it is because of how disgusted they are with how things are going in CA but when they see what is happening in Swampland, it just gets things much worse.

It is becoming obvious to most Americans that Trump is a man among children trying to bring order where the parents are absent and negligent. His main source of power is the American voter and he is getting stronger every day. It is really up to the Republicans to get wake up, get their act together and hang on to Trump’s apron strings as he leads the GOP into a historic 2020 win. The Dems sure are doing their best to guarantee it!

I don’t think either side is winning any converts.

There are zero grounds for impeachment,so why bother watching.

Everything we’ve seen since the Trump election, including this current farce of a hearing, has painfully demonstrated that democRATs and the Main Stream Media have an incestuous relationship with each other! It is to the point where I honestly don’t know if the democRATs control the Media or the Media run the democRATs, but it sure isn’t good for the country! The only way to correct it is to un-elect democRATs to limit their ill-gained power and send a message to the corrupt Knee-Pad Media and their handlers!

Why watch? The Democrats have already decided how THEY are going to vote, so what difference does it make? (See how I threw in the reference to HilLIARy’s hearing? Huh, huh!) But seriously what is the point? Democrats decided on Nov 9, 2016 what they were voting. I just hope that this is the end of the Democrats!

I mean, I just wonder, what law, statute, what rule, protects the whistleblower from another?

To me it sounds like the nonexistent honor among thieves.