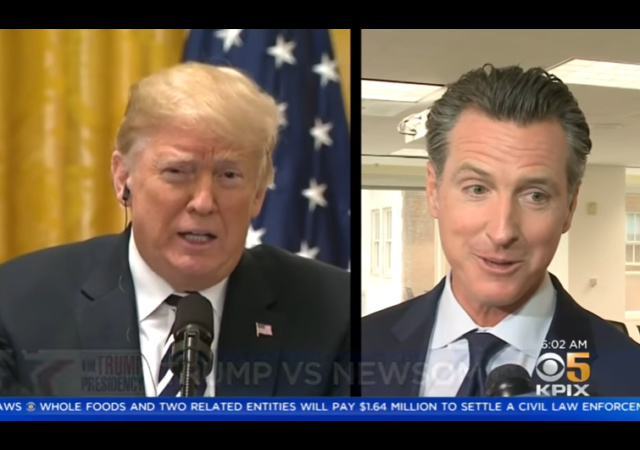 There is some good news this weekend related to the California wildfire emergency. Authorities have lifted all evacuation orders and firefighters are making progress on blazes in southern California.

Crews working in steep terrain were tamping down hotspots and keeping an eye on lingering gusts in mountain areas that could carry embers, said Ventura County Fire Capt. Steve Kaufmann.

President Donald Trump has been following the situation in California and had a few remarks related to the state’s eco-activist leadership.

“Every year, as the fire’s rage & California burns, it is the same thing-and then he comes to the Federal Government for $$$ help. No more,” the tweet continues. “Get your act together Governor. You don’t see close to the level of burn in other states…But our teams are working well together in…..

“….putting these massive, and many, fires out. Great firefighters! Also, open up the ridiculously closed water lanes coming down from the North. Don’t pour it out into the Pacific Ocean. Should be done immediately. California desperately needs water, and you can have it now!”

The Governor of California, @GavinNewsom, has done a terrible job of forest management. I told him from the first day we met that he must “clean” his forest floors regardless of what his bosses, the environmentalists, DEMAND of him. Must also do burns and cut fire stoppers…..

Trump reiterated his concern on Sunday afternoon to reporters gathered on the White House South Lawn.

“You’ve got fires eating away at California every year because management is so bad,” Trump said. “The governor doesn’t know; he’s like a child, he doesn’t know what he’s doing. And I’ve been telling them this for two years. They’ve got to take care of it. Every year it’s always California, it’s rarely somebody else or someplace else.”

Trump has repeatedly taken aim at California since taking office nearly three years ago, often over environmental issues. He has previously criticized the state for not properly “raking” the forest floors to help prevent fires and threatened to cut off Federal Emergency Management aid. Experts have pointed to climate change-related reasons for the uptick in wildfire frequency and strength in recent years.

How did Newsom respond? With the poise and dignity one would expect from the general of the anti-Trump #Resistance!

You don’t believe in climate change. You are excused from this conversation. https://t.co/PSt8N39Er5

The #CancelCulture approach did not go over very well among those of us who realize the combination of green policies, poor land management, and deteriorating power infrastructure created the conditions that fueled the wildfires and led to the preventative blackouts.

The fires you’ve allowed to flourish have dumped out 10x more carbon than anything we’ve tried to save.
TBQH Trump knows more about CO2 than you do.

See there you go. Back to bashing. Gavin these fires are not a result of climate change. They where started by man & the fail of PG&E along with what fuel the fires mismanagement of the forestry. So you sir are excused from this conversation. Resign before the recall get you!

Our State is on fire & people don’t have power. Instead of replying with a non sequitir how about telling us your plan for today, tomorrow, next month?

“Our state is crumbling, quick what do we do”?
?
“Lets attack Trump”!

I’d rather hear your reasoned response than a retort @GavinNewsom. 1. Explain to your constituents what ALL the possible solutions are. 2. Acknowledge we don’t have all the answers. 3. Take responsibility even if it means critiquing our own party. #angelenosforanswers

Personally, I am betting that Trump’s campaign team will make California the focus of several ads for 2020 . . . as cautionary tales in what really happens in progressive utopias.

‘Experts have pointed to climate change-related reasons for the uptick in wildfire frequency and strength in recent years.’

What a convenient, evidence-free assertion to make that they don’t even have to prove. It also conveniently attacks capitalism. Lefties have this.

Climate change is magic don’t you know. It causes

Pick your natural catastrophe and climate change is the cause. Global warming was not so magical hence the name change.

notamemberofanyorganizedpolicital in reply to Massinsanity. | November 5, 2019 at 9:44 am

Guess Obama was leading with “climate change” from his behind!

CaCa state Gov. Gruesome is the death of California.

It’s not the Climate that changed its the Socialism.

notamemberofanyorganizedpolicital in reply to dystopia. | November 5, 2019 at 9:45 am

How much wind energy does CA have in place? High winds cause wind energy to shut down. Could CA be short of electricity in windy times? Could the power outages be a way to cover up the failure of wind energy by blaming the outages on fire risks?

There is just something that does not make sense about the official explanations regarding the power outages and the fires. Yes, fuel on the ground is a huge factor but is there more at play here?

I don’t believe these CA politicians understand the political storm that is heading their way. We never voted for this crap and when we voted against it, the judges “corrected” the voters’ mistakes.

Of course, the Republicans will have to field some candidates for a change. Put something on the ballot for us to vote for or a great many of us will either leave the state or stay home.

You knee-jerk CA haters will learn this for yourselves once you get over your CA hatred and wake up to what is really going on in YOUR state. Nice job Texas electing all of those left-wing sanctuary city mayors. Maybe someday you will build a border wall like CA did 20 years ago.

What political storm? The vote harvesters will still beat anything you do – honest elections are a thing of the past in California.

And what do you mean “all thos left wing sanc city mayors”? First of course Austin, but Austin is sui generis, plus they hate the Republican State Govm’t they have to host, and the State Govm’t hates Austin back, so they’re always doing things to tweak each other. (The State is winning, slowly)

Other than that, sure there are a lot of Mexican cities (San Antonio being the biggest) that vote in all Mexican officials and say pro-Mexican things all the time. But Mexicans gonna do what mexicans do, that’s not the State Govm’t.

This is a one-party state. Republicans have skedaddled. Yet the voter disdain for our government is off the the charts. The politicians are already feeling the flames licking their asses. They have no one to else to blame for the chaos and corruption. THEY are the ones who have to face the music and rigging the elections is NOT going to accomplish anything. ALL governments are democratic at some level, even if voting has been rigged.

That is what is going on in CA. Government has stopped working and ALL voters are fed up. With no competitive dialogue to place the blame, guess who has to face the music? Elections aren’t the only way to punish politicians. I doubt there are many happy politicians in Venezuela these days.

That doesn’t change the fact that every major city in TX is a sanctuary city. Apparently, there is no penalty for “messin’ with Texas”. Houston is the US capitol for open borders. No one is bigger on open borders than the Bush Family International Crime Syndicate. Guiliani-Bracewell, THE open borders law firm, is also in Houston.

You have just about lost your state and it wasn’t CA that did it to you. You are STILL doing it to yourselves.

That is a stone, bald-faced lie.

Dream on … there is no hope of a Republican revolt in California. None what so ever.

Newsome: “You are excused from this conversation.”

Trump: “I’ll remember that when you ask for federal aid.”

I understand that Texas has elected left wing nut jobs in the cities, but mainly because CA refugees that have come in the hundreds of thousands, if not millions, relocated in our big cities and brought their left wing SHIT with them

The same thing has been happening on a smaller scale in NH. Moonbats looking for a lower cost of living or more open space leave MA and move to NH. It happened decades ago in VT which was invaded by moonbats from NY and MA. It’s hard to believe now but VT was for over a century a rock solid Red State.

The same thing happened in my state of Florida starting about fifty years ago. This is why it is teetering to the left today.

“There is just something that does not make sense about the official explanations regarding the power outages and the fires. Yes, fuel on the ground is a huge factor but is there more at play here?”

This year, shut downs result in outcry over inconvenience and also change in attitude regarding forest clean up. Govt trying to blame PGE for problems actually caused by decades of forest management favoring “endagered species” .

There are recall petitions being circulated.

Having been born and raised in Southern California I am well aware of the lack of forestry management over the last 30 years. Gavin needs to get off his butt and actually do something. Heavens knows Moonbeam didn’t.

Newsome is a left-wing privileged loser.