“The dog is incredible. Actually incredible. We spent some good time with it. So brilliant and so smart.” 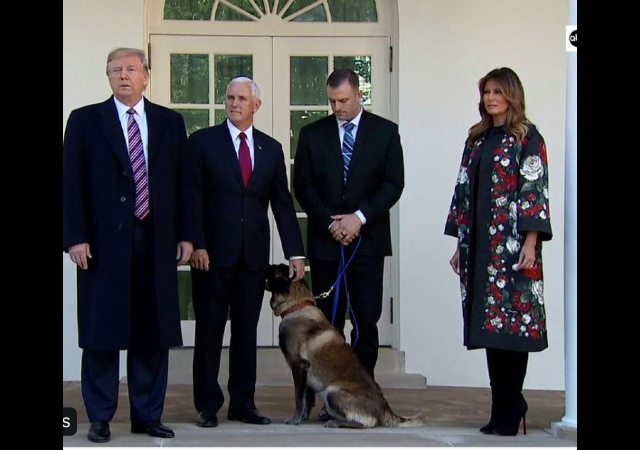 She is no ordinary military dog. Conan is the dog who cornered ISIS leader Abu Bakr al-Baghdadi when he killed himself.

Conan’s surprise appearance came one day before Trump is set to participate in the annual pardoning of Thanksgiving turkeys. The president and first lady Melania Trump flanked the dog on either side as he spoke to the press, while Vice President Mike Pence hung back and pet Conan as the dog sat happily by the legs of her handler, smiling and unphased by the nearby swarm of press.

“The dog is incredible. Actually incredible,” Trump said. “We spent some good time with it. So brilliant and so smart.” Trump also noted that he’d met in the Oval Office with some of the two-legged participants in the Baghdadi raid, noting that “for obvious reasons, they can’t be out in front of the media.”

Pence also spoke briefly, calling Conan a true “hero.” He described welcoming the dog to the White House as a “real joy.”

“Conan was very badly hurt as you know, and they thought maybe he was not to recover. Recovered very quickly and has since gone on very important raids,” Trump interjected, calling the dog a “tough cookie” and asserting that “nobody is going to mess with him,” though a White House official confirmed afterward that Conan is female.

Trump took the opportunity to joke with the press:

“You’re lucky he’s not in a bad mood today, Jeff,” he quipped at one reporter. Trump also used the occasion to talk up his administration’s progress in defeating the Islamic State’s physical caliphate in Syria prior to his decision to withdraw troops just weeks before the Baghdadi raid, as well as the use of K-9s elsewhere in the federal government.

“They are very special dogs,” he said, calling Conan “prime time” and predicting she would not be retiring any time soon. “They are very hard to get, this particular dog is. This is the ultimate fighter, the ultimate everything.”

Look at the cuteness!

Pres Trump in the Rose Garden with Conan, the US Army dog who during the raid on ISIS leader Abu Bakr al-Baghdadi, chased him down a tunnel that led him to detonate his suicide bomb vest which killed him & three children. Pres has often referred to Conan as a hero. pic.twitter.com/m7ZLDUEoM6

You know how the left reacted? Like complete lunatics. They are sick.

This is terrifying. Trump and Melania exude coldness to Conan the hero dog. Melania, whose coat is slightly macabre (to me, but others may find it lovely), moves away from Conan multiple times. 1/3 https://t.co/s9T3Y4ZYTn

Note that the trainer is watching the dog. A properly trained dog is left to his own devices to operate but this is a new context and the trainer is ready to give a command if needed.

I’ve read some really snarky comments about Pres. Trump and Melanie concerning their behavior towards the dog (among other things.) FWIW, only the handlers are supposed to touch these well-trained dogs, although no one was going to stop VP Pence in this situation. And, watching the video, it appeared to me that Melanie backed up not to get away from the dog but to allow people on the side to get a better view of the animal. But haters gonna hate.

Clever of Pence to put a bit of hot dog in his suit pocket.

in the video, it looked to me like she was trying to get out of the way for the cameras. Wish Trump had also… couldn’t see the hero behind him 😉

I don’t think Pres. Trump and Melania are dog people — and there’s nothing wrong with that.

My opinion of Vice Pres. Pence just went up a notch however.

FWIW, since there’s so much concern nowadays for getting the pronouns correct, it’s “she” not “he” or, worse, “it”.

Melania moved away from the dog exactly once, to make room for Pence and the handler.

I would like to see Conan at a campaign rally. That would be great optics and very Trumpian. How the dog would react to 15K people yelling and screaming is another matter and may be the reason it hasn’t happened or never will.

I’ve noticed the trend of jihadist cowards ending up cornered, rather than coming out fighting, ala saddam, ghaddafi, bin laden and the latest coward bakr.

That dog looked at the press and saw a target rich environment.

thanks for the giggle

Conan bit the reporter from CNN and then had to spend the next hours licking his butt, to get the taste out of his mouth!

Too bad they didn’t sic Conan on Acosta.

The dog is a better fit in the White House than either Obama ever was.

notamemberofanyorganizedpolicital in reply to TheFineReport.com. | November 26, 2019 at 1:02 pm

Barrack had a Belgium (as in capital of the EU bureaucracy water dog)…..until he ate it I guess……

Barrack had a Belgium (as in capital of the EU bureaucracy) water dog…..until he ate it I guess……

Okay, someone has to say it, so I guess I’ll be the brave one and sacrifice myself: