“The explosion was caused by the Skyfall experiencing a criticality accident” 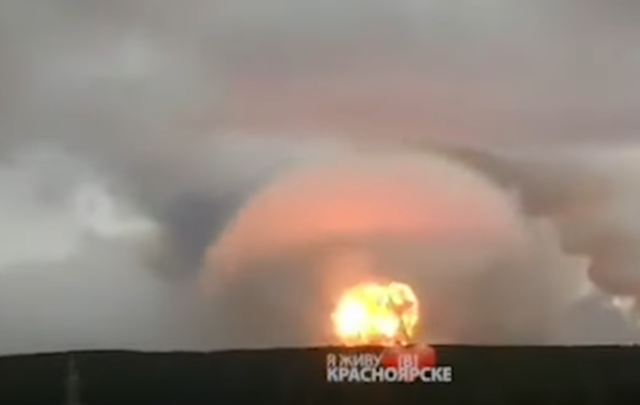 Legal Insurrection readers may recall my post on the explosion off the coast of Northern Russia that killed several people and resulted in a radiation spike large enough to be detected across the Baltic. Nearby villagers were taking iodine as a precaution.

It turns out the explosion was reportedly from a new Russian superweapon that is part of its Skyfall program and was triggered when its navy was attempting to salvage the failed missile. The reason for the dearth of news is that officials were covering-up the news.

Russia covered up the deadly nuclear reactor explosion in August during the salvage at sea of one of Vladimir Putin’s new superweapons, a nuclear-powered cruise missile called Skyfall, a senior State Department official disclosed.

The reactor exploded Aug. 8 off the coast of the northern Russian town of Nenoska, killing seven Russians on a barge in the White Sea as they were overseeing the recovery of a sunken Skyfall. The missile had been sitting on the seafloor for about year after a failed flight test, said State Department official Thomas G. DiNanno.

“The explosion was caused by the Skyfall experiencing a criticality accident, an uncontrolled nuclear reaction that released a burst of radiation while Russian personnel retrieved it from the seafloor,” Mr. DiNanno said in an interview with The Washington Times.

The reactor exploded in the Arkhangelsk region in Russia’s far north near populated areas and triggered concerns about fallout spreading to the Baltic states of Latvia, Estonia and Lithuania, as well as Sweden, Denmark and Finland, he said.

“The missile sat on the seabed since its failed test early last year in close proximity to a major population center,” Mr. DiNanno said.

Interestingly, several American diplomats were stopped recently from traveling to that area.

The U.S. diplomats were reported on Wednesday to have been stopped and removed from a train travelling between the closed port city of Severodvinsk and Nenoksa, a village next to the test site on the White Sea in Russia’s Arctic.

The American embassy confirmed the incident, but said the diplomats had informed Russian authorities of their travel in advance.

Russia’s foreign ministry said the diplomats had told Russian authorities they intended to visit a different city, Arkhangelsk, which isn’t within a restricted zone, but then traveled to the closed area next to the test site.

“Clearly, they got lost,” the foreign ministry said. “We are ready to give the U.S. embassy a map.”

The ministry spokeswoman, Maria Zakharova, told reporters on Thursday the American diplomats had made two attempts to reach the restricted zone, travelling to Severodvinsk, a port city that’s home to Russia’s nuclear submarine fleet, with the goal of travelling to an area near the test site.

Skyfall (aka 9M730 Burevestnik) is a Russian experimental nuclear-powered, nuclear-armed cruise missile. The missile is claimed to have virtually unlimited range.

Sébastien Roblin, a military historian and university instructor for the Peace Corps in China, notes that the United States once mulled over developing similar weapons.

One concept was to use a nuclear ramjet propulsion system to create a rocket that could fly for months thanks to a small nuclear reactor on board. The ramjet functioned by sucking in onrushing air while traveling several times the speed of sound, and warming it with its small reactor. The heated air would expand and get squeezed out exhaust nozzles to result in high-speed propulsion.

The resulting Supersonic Low-Altitude Missile (SLAM) was powered by a small reactor codenamed “Pluto,” to be developed by the Lawrence Livermore National Laboratory in Berkeley, California.

While proto-hippies gathered at the nearby university campus, the scientists at the laboratory, under project director Theodore Merkle, were devising a huge missile designed that would make any caught underneath it “deafened, flattened, and irradiated,” as Herken memorably put it in his article.

The project was dropped once the ICBM program was firmly established, as well as the fact Washington officials determine SLAM was too costly and too risky . . . both from a safety and political perspective.

Let’s hope the Russians have learned from this explosion.

I have always loved SLAM. The nuclear ramjet engine itself has huge potential. Read about the Jupiter Flyer mission, where such an aircraft would fly within the atmosphere of gas giants such as Jupiter and collect data directly for months at a time.

notes that the United States once mulled over developing similar weapons.

But was never reckless enough to build them, even for test. The same considerations killed the idea of an atomic-powered airplane ‘way back in the ’50s.

The problem is that reactors, as an unavoidable aspect of their operation, generate a lot of radioactive waste, much of it very hot (short half-life) and some very dangerous (like iodine and strontium isotopes, which are absorbed by the human body). A crash of a reactor-powered aircraft would release all sorts of ugly stuff into the environment when the reactor ruptured; nobody ever came up with a failsafe container which would survive a typical crash, so the projects were allowed to die.

The US has sent reactors into space, but they are always fired off unactivated, and only started once they’re safely in space and can’t fall back where they can lower property values. This is technically difficult but much safer; the new fuel is radioactive but nowhere near as radioactive as it is after it’s started to load up with daughter isotopes (ie, waste). It is believed that the reactors the Soviet Union fired into space were not so sophisticated, and were hot on liftoff. However we all lucked out and none of these radioactive items seem to have been in any crashes. At least so far.

Pluto/SLAM was killed off because of the very limited application of such a weapon. It was only suited to a state of total war, as are ICBMs, but unlike ICBMs you had to be much more selective about where it could launch from so that you didn’t irradiate people and places you’d rather not. ICBM development also promised technological advances useful in other applications. Pluto/SLAM was all or nothing, an absolute weapon, which is part of what makes it so interesting.

Atomic-powered bombers however were done in because manned reactors, no matter how compact, need shielding, and that shielding is mass.

“…and that shielding is mass.”

We have planes which can lift 100 ton payloads without difficulty. Shielding weight was not the insurmountable problem.

Sorry, weight in an airplane is always a problem.

It was/is insurmountable with respect to flying a nuclear powered airplane economically. You’ll note, none are under development.

Russia has a rather long history of technical, and political corruption driven incompetence.

The project to build a reactor for a nuclear-powered aircraft led directly to the development of the MSR – the molten salt reactor (specifically the MSR-LFTR, a lithium flouride thorium reactor). This reactor was light enough (including its shielding) to be practical for an aircraft. Also, due to the nature of its fuel (a molten salt), it was extremely safe to operate and had a very interesting fail safe – if you were to break one open, it shuts down automatically.

MSR fuel consists of radionuclides suspended in a liquid salt. If you cracked open the reactor, the fuel flows out and disperses, the nuclear reactions stop and the liquid salt freezes solid.

The MSR’s fuel must be kept contained in order for it to react. An MSR has no control rods. In a ground-based MSR, there’s a drain at the bottom of the fuel vessel. The drain is plugged with a stopper of frozen salt, actively kept cool to keep the plug solid to prevent the fuel from leaking out of the containment vessel. When something goes wrong, the cooler is turned off (or it goes off automatically when power is lost), the frozen plug melts, and the fuel drains into a catch vessel, which is larger than the reactor vessel. In the catch vessel, the fuel’s heat causes it to expand, and, in doing so, the fuel’s density drops to a point at which the reaction stops. The fuel cools as the density goes down, and the salt freezes. Instant confinement and automatic shutdown of the reaction!

You think they give a damn about a few more?

Soviets, communists, socialists, fascists, leftists “=” but not equal to Russians. This incident was caused either by choice (known), negligence (known unknown), or exploration (unknown).

To clarify, those were Soviet citizens murdered, not including war dead. Surrendering your freedom to communism/socialism has proven to be by far the surest way for citizens to get themselves killed. ALL of those governments have killed mostly its own citizens. That’s the price for economic “equality” and social “justice”.

Ukrainians along with others were forced soviet citizens. They, the commies, will kill anyone, their own citizens or others that get in their way.

One of many Russian engineering setbacks of late. The problems is not the drawing board. That is so good even American aero-manufacturers will buy the drawings (modern Boeing interior cargo holds and hand rail were specifically designed by a Russian team), but in the construction. For example, there is a particular steel that America and Japan use in nuclear reactors. It is only manufactured in Japan. It is expensive and hard to make…and is sold only to American and Japanese firms.

I’m trying to figure out what that example has to do with the incompetent Russians.

I assume you know the Japs have had multiple problems with steel sold for use in nuclear plants? And covered it up?

Considering the size of the missile, the reactor used highly enriched uranium. Payload and propulsion being a one-two punch when it went off. Hard to hide a mushroom cloud that big. Many believe that Chernobyl was less a steam bomb and more likely a low yield (explosive) nuclear blast. The Russians do push the envelope don’t they?

I don’t know about that…

🙂 We always beat the Russians.

To all fascists, communists and the like: The nuke arms race seems so stupid – –

It’s hard to be a victor when there is nothing left to be victorious over.

But then, fascists dream, don’t they?

“That blinding flash on the northern horizon.”

“I’ve seen the Northern Lights. They don’t flash that bright.”

“Maybe not in decadent America…”

Silly Russians. Skyfall? Are they serious? It’s always a bad idea to name a superweapon after a Daniel Craig Bond movie.

Nothing good ever comes of it.

The Russians didn’t name this project skyfall, it was western intelligence services who did that.