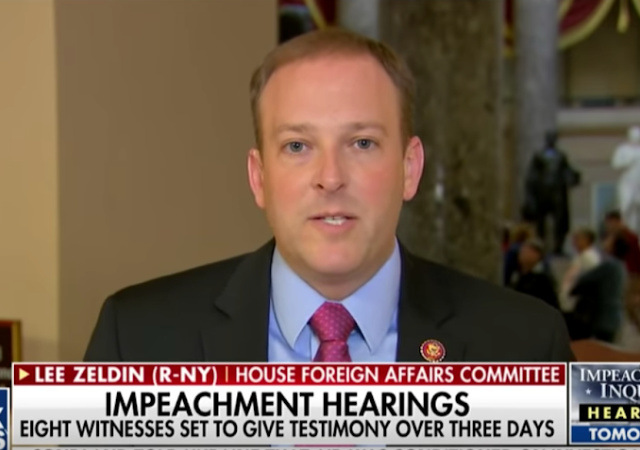 Rep. Lee Zeldin (R-NY) said he wants to postpone future impeachment hearings due to new developments from closed-door testimonies over the weekend:

“A lot of people didn’t realize that once the cameras ended… on Friday, we then went back to this SCIF in the Capitol basement where there was a closed-door deposition,” Zeldin said on Fox Nation’s “Maria Bartiromo’s Insiders.”

According to Zeldin, Sandy “went right to the heart of why there was a hold on aid to Ukraine” during his Saturday deposition, and called for a release of the transcripts containing Sandy’s statement in time for week two of public hearings.

“You still have those several transcripts, including both David Holmes and Mark Sandy, that haven’t been released to the public. I believe that we should not go forward with the next open public hearing until the rest of these transcripts are out because I would have questions to ask of these witnesses come Tuesday morning based off of what we heard,” Zeldin said.

Zeldin cannot reveal what came up in the depositions, but he will center his questions around the new information.

Only House Intelligence Committee Chairman Adam Schiff can make the transcripts public. Zeldin hopes the papers come out on Tuesday.

If the transcripts do not come out, Zeldin said the committee will “move the open hearings back a day or two or three, because it’s going to change some of the answers that some of these witnesses will be giving.”

Then on America’s Newsroom, Zeldin described Schiff’s behavior as “disgusting,” especially when “he threatened to send the president ‘back to the golden throne he came from.'”

“Listen, my background’s in the military. There are a lot of great people in the military, I would follow into combat. If they were charging a hill I would follow them,” he said. “I would die for them. I’d fight with them. I would never want to have to charge a hill with Adam Schiff leading the charge.”

“What you saw in that speech is — it’s really disgusting rhetoric, it’s divisive,” Zeldin said. “What we’ve seen from this entire impeachment charade is an effort that essentially, and eagerly, tears our country in half.

“We should be focusing on important priorities for our constituents,” he continued. “But instead for him to give that kind of a speech over the weekend — it’s sick. It’s not helpful for our country, it’s divisive and it’s not bringing us together.”

Zeldin and the other Republicans on the impeachment committee should make the transcripts public regardless of whether or not Schiff and the other Communists agree. This is like waiting for the Nazi armed forces to voluntarily leave occupied Europe out of the goodness of their hearts. Ain’t gonna happen.

Either you fight this coup attempt, or you are a willing participant. Pick your side, Zeldin.

It’s a political process dressed up like a legal process, so at this point GOP participation is all part of the show. Sham impeachment is going nowhere, we all know it, how the democrats pull the plug on it is what interests me. Probably something to do with AG Barr interfering with their efforts (more shrieking about obstruction of justice). The IG report and Durham’s work will all factor into the howling I’m sure. The far left low-information types will lap it all up. Sad.

Horowitz is scheduled to testify about his report in early December, so we should be seeing his report pretty soon. That could mean we’re seeing some activity from Durham in the next couple of months, but I’m not that optimistic, given the thud that accompanied the last one and the propensity thus far to let the bastards skate.

Sundance has published the report on Conservative Treehouse. I haven’t read it yet, but Sundance claims it’s underwhelming. No surprise.

Even though you mixed up the reports, that actual report will also be underwhelming. Barr, Horowitz, Huber and Durham are all Swamp and they will protect it.

Barr is laying the groundwork for not indicting anyone. He’s using statements like: “it is the Left that is engaged in the systematic shredding of norms and the undermining of the rule of law” but the final conclusion will be they never broke any laws or the same cop-out Comey took: “no reasonable prosecutor would press charges”

Amen. Thanks to him for his wise and sober words.
Not too many people I know would follow Adam Schiff anywhere, especially downwind.

“If the transcripts do not come out, Zeldin said the committee will “move the open hearings back a day or two or three, because it’s going to change some of the answers that some of these witnesses will be giving.””

In this instance I do not agree. Keep the Sandy testimony under wraps until the other witnesses testify, then discredit them with the truth.

What makes you believe that Shiff for Brains and his staffers won’t prep the witnesses? Surely you don’t think he is above that sort of conduct.

Zeldin’s wishes will not come true, however he can read Nancy’s “Dear Colleague” letter into the record where she essentially echoes Rep Al Green’s sentiment that the only way to prevent a two term Trump is to impeach him

“If the transcripts do not come out, Zeldin said the committee will “move the open hearings back a day or two or three, because it’s going to change some of the answers that some of these witnesses will be giving.”

jl: In this instance I do not agree. Keep the Sandy testimony under wraps until the other witnesses testify, then discredit them with the truth.

That’s right. One purpose of closed door testimony is to prevent witnesses from coordinating their answers. That Zeldin says answers will depend on the contents of this other witness’s testimony is indicative that people will shade their answers. Sondland has already had to modify his original testimony.

Another advantage of closed door testimony is that Schiff for brains gets to leak his version and bury the rest.

“I would never want to have to charge a hill with Adam Schiff leading the charge.”

Zeldin must have been having a senior moment when he said that (no matter his age). He surely knows that Schiff for Brains would always lead from behind – far, far behind the Forward Edge of the Battle Area (FEBA).