“protesters, some with their faces concealed by kaffiyeh scarves, chanted pro-Palestinian slogans in the auditorium that included calling for an intifada” 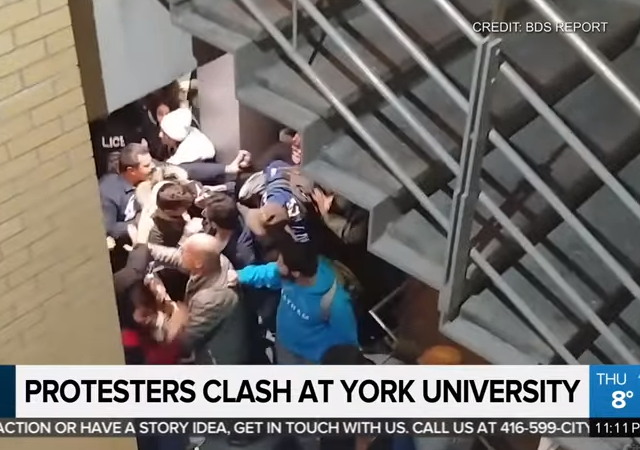 York University in Toronto recently hosted a panel with some former members of the Israeli Defence Force. Members of Students Against Israeli Apartheid (SAIA) showed up to protest and things got ugly.

An attempt to shut down a pro-Israel event on a Toronto university campus has failed.

Members of Reservists on Duty, an organization that tours North American campuses “to speak with knowledge and confidence on behalf of Israel,” were hosted by Herut Canada at York University’s main campus on Wednesday evening. Earlier in the week, posters appeared all over the campus urging “No Israeli soldiers on our campus!” – leading to security concerns ahead of the scheduled event.

Officers of the Toronto Police Service and private security personnel were on hand to enable attendees to enter the event, despite the best efforts of protesters outside to block them.

Among the protesters present was Holocaust-denying newspaper editor Nazih Khatatba, who glorified a 2014 massacre at a Jerusalem synagogue and has described Judaism as a “terrorist religion.”

At one point, police were forced to intervene to prevent physical violence and injury.

This video from City News Toronto shows an actual brawl breaking out:

The Times of Israel has more:

Violence erupted at a protest by pro-Palestinian students against an appearance by Israeli army reservists at York University in Toronto on Wednesday night.

Members of the university chapter of Students Against Israeli Apartheid, or SAIA, tried to shut down a university-approved panel discussion featuring Reservists on Duty, a group made up of former Israeli soldiers.

The protesters, some with their faces concealed by kaffiyeh scarves, chanted pro-Palestinian slogans in the auditorium that included calling for an intifada, or attacks, against Israeli civilians, the Toronto Sun reported.

Punching and scuffling occurred in a nearby stairwell, requiring police to break it up, according to the report. There were some arrests…

“Further investigation is required into how a registered student group was permitted to glorify terrorism and attempt to intimidate those peacefully assembling on campus,” Michael Mostyn, chief executive officer of B’nai Brith Canada, said in a statement. “There must be consequences for violent behavior.”

The Friends of the Simon Weisenthal Center said it was pressing local authorities and university officials to take action against what it described as “an antisemitic, violent, racist mob sentiment toward Jewish students on this campus.”

Here’s a video from another part of the protest:

A member of the New Democratic Party (NDP) in Canada actually encouraged the protest:

ALL OUT against IDF on York University Campus TONIGHT 6pm.

An institution that claims to stand for social justice is no place to host those tasked w/upholding an illegal occupation, enforcing apartheid and murdering protestors.

I will stand with you @SaiaYork #FreePalestine

Prime Minister Justin Trudeau has denounced the violence from protesters:

On Wednesday night, violence & racist chants broke out against an event organized by the Jewish community at York University. What happened that night was shocking and absolutely unacceptable. Anti-Semitism has no place in Canada. We will always denounce it & all forms of hatred.

By your inaction to face the inevitable it will only get worse.

Given the opportunity, one IDF member could have cleared out the hate mongers in a matter of minutes.

I had some flight training with a Mossad pilot, about twenty years ago. He was a fabulous pilot and powerful man, very inspiring and not to be trifled with.

Bet George Sorass is funding that just like this.

Never forget, this is going on because the University Administrators *want* it to go on – the “protesters” are their proxies.

If you doubt that, just ask yourself what would happen if some anti-abortion activists tried to disrupt a Planned Parenthood event. YOu and I both know there would be 500 cops on the scene in 15 minutes.

notamemberofanyorganizedpolicital in reply to Tom Servo. | November 23, 2019 at 12:56 pm

And that’s because they’re almost exclusively Democrats just like the Media/Msm are almost 95% Democrats…..

Why bother, the answer is obvious: the left loves Islam.

Islam is the same thing as Satan but different letters.

Canadian universities have a long history of this kind of thing.

York University itself does also. This has been happening there for at least a decade. In 2009 students needed a police escort to leave the Hillel (Jewish student’s organization) office after it was surrounded by rioting palestinian supporters.

The administration did nothing then and I doubt they’ll do anything now.

Not “former” IDF members. As their name says, they are reservists, i.e. current members who still do their duty whenever they’re called up. (It used to be that almost every adult male in Israel under about 55 was in the reserves, and did a month’s duty every year; but according to Hebrew Wikipedia only 6% of the population are now registered in the reserves, and only 1.5% serve more than 20 days every three years.)

So maybe ten of them? Just haul them off .

See above article about Malmo, Sweden.