Trump served Thanksgiving dinner to the troops at Bagram Air Field and thanked them for their service. 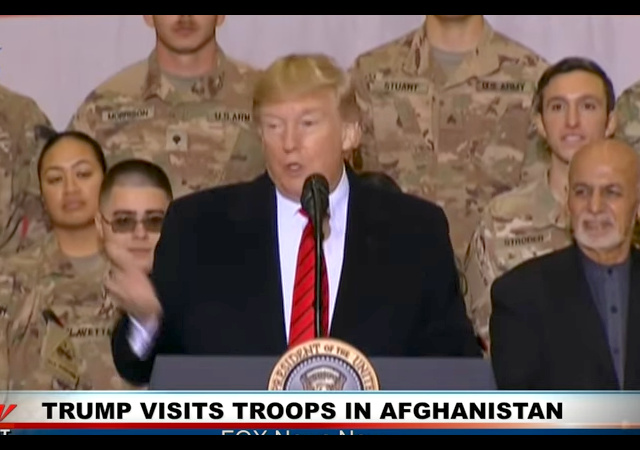 The trip was kept a secret for security purposes.

The president arrived in Afghanistan just in time to serve troops Thanksgiving dinner on Thursday. Standing alongside Chairman of the Joint Chiefs of Staff Gen. Mark Milley, he dished out turkey to roughly two dozen troops at a dining facility decorated with red, orange and yellow Thanksgiving banners and tablecloths. Mulvaney, Barrasso, and O’Brien were also behind the counter.

According to the original schedule, Trump was to spend Thanksgiving at Mar-a-Lago in Palm Beach, Fla. The secret arrangements included a tight control on the press and heading to an undisclosed airfield.

Reporters were under strict instructions to keep the trip a secret to ensure his safety. Mr. Trump’s public schedule said he would be at Mar-a-Lago to host a videoconference call with troops. It’s his first trip to the country as president. While in Afghanistan, Mr. Trump said he hopes to bring the number of troops in Afghanistan down to 8,600 from the current 14,000.

After arriving, Trump went behind a serving counter to distribute a turkey to the troops, which was followed by a Thanksgiving address that included a side dish of humor.

‘I sat down, had a gorgeous piece of turkey. And I was all set to go and I had some of the mashed potatoes. I had a bite of mash potatoes and I never got to the turkey because the general said come on over and let’s take some pictures,’ Trump told the troops in his remarks.

‘First time I’ve never had any Turkey at Thanksgiving. But that is okay. But it looked about good. I should have started with that instead of the mashed potatoes. I made a mistake,’ he added.

Trump ladled on a heaping amount of appreciation for members of the military now serving.

He visited troops at Bagram Air Field to thank the men and women for their service, calling them “courageous American warriors.”

“I just want to say that we thank god for your help and all of the things that you’ve done. You’re very special people and you don’t even know how much the people of our country love and respect you,” Trump said in his remarks to a few hundreds troops.

Trump also announced that he has restarted peace talks with the Taliban and that he’d like to reduce the number of U.S. troops in Afghanistan to 8,600, down from a current total of less than 14,000.

The troops were thrilled with the visit.

US troops in Afghanistan break out chanting USA! USA! as President Trump surprises them for Thanksgiving pic.twitter.com/WxNid9c8k5

And while some of the press is promoting the idea that Trump “doesn’t understand the military” today, there is plenty of evidence he does understand America’s reporters.

His entire trip back to DC from Florida and on to Afghanistan was not reported by any media outlet https://t.co/ZChsopIPHI

In his DREAMS, PDJT probably never could predict the fun he is having. This is a giant kid in the world’s most gigantic toy store.

We were smart enough to hire him, but he is performing WAY above our expectations: he is single-handedly pulling our country off the fascist precipice.

That said, it is probably too late for the country after the baby boom generation ages-out: after all the years of indoctrination, poisonous feminism and emasculation of young men, these characters will vote themselves into slavery.

Sure, we have a responsibility to future generations to preserve the Constitution, but there is only so much you can do.

Bottom line: we have to do the best we can do for future generations, but we have to protect our current freedoms at the same time.

It may not be pretty, but war never is. Slavery is worse.

Jack Posobiec
Check the timestamps. When Newsweek posted this, Trump had just landed in Afghanistan
——————————–

Click the link to see “newsweak” beclown themselves as usual.

Did he pose with a plastic turkey that he brought with him from Washington? And did he roust the soldiers out of bed at some ungodly hour of the night so he could be photographed serving them “dinner” (because some stupid reporter doesn’t understand time zones)?

The media cannot help but beclown itself. You would think that after 2 years they would have learnt by now BUT no…they cannot help themselves because their hatred is so all encompassing that it over rules their common sense.

They HAVE to hate Trump. They can’t sit back. They MUST project their hatred and on Thanks Giving that projecting is in how they really want Trump to be celebrating Thanks Giving by playing golf (funny how golf playing WAS an issue under Bush…then it WASNT an issue under Barry and now it IS an issue again). Why its almost as if the media is biased in favour of Democrat Presidents or something?

I’m pretty sure Trump said God with a capital “G.”