Are they mortal or venial sins? 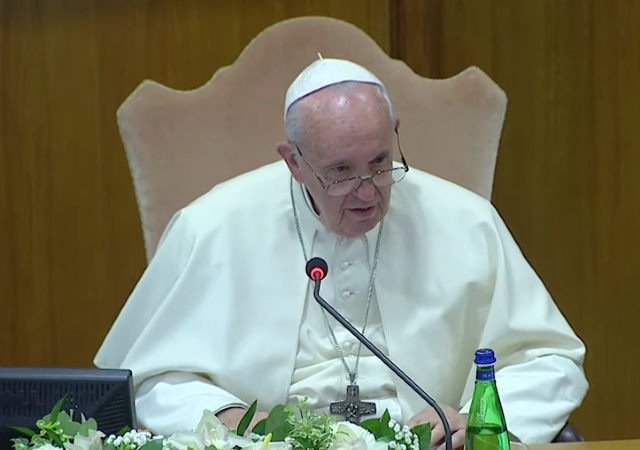 Pope Francis appears to be contemplating the of “ecological sin” to the Catholic catechism, based on remarks he recently made members of the International Association of Penal Law.

The pope’s words came just weeks after the conclusion of a bishops’ summit on the Amazon focused on the environmental threat to the region.

Francis was speaking to the 20th world congress of the International Association of Penal Law, held in Rome Nov. 13-16, under the scope of “Criminal Justice and Corporate Business.”

He also said that the culture of waste, combined with other widespread phenomena in welfare societies, is showing the “serious tendency to degenerate into a culture of hatred.”

Francis also called on the international community to recognize ecocide as a “fifth category of crime against peace.”

According to the Rome Statute, which was adopted by the International Criminal Court in 1998, the four core international crimes currently established are: crimes against humanity, genocide, war crimes and crimes of aggression.

In the synod’s final document, bishops defined ecological sin as a sin against God and future generations that “manifests itself in acts and habits of pollution and destruction of the harmony of the environment.”

Given that I am a climate heretic, as well as a practicing Catholic, I guess I will be heading to confession far more frequently than I do.

It appears that I am not the only Catholic contemplating the consequence of defining “ecological sins.”

@Pontifex A new sin~No more smoke for selecting new popes(cough)!
No pope mobile or jets~environmental sin!! The church has many internal issues; now we are casting sin on its people~mea culpa sir! I think Christ would have a tear when you are luke warm on killing babies~a sin!

How does one rank ecological sins? Mortal or venial?

On that account; shutting down operating nuclear reactors would be a mortal environmental sin https://t.co/8rQ5zjnjPz

Which has Catholics testing out the new rules:

Breaking: The Pope has declared Eric Swalwell’s fart on MSNBC earlier today as an “environmental sin”.

12 Hail Mary’s and an impeachment inquiry with an anonymous whistleblower (Chris Matthews) will testify before the House as punishment.

Curious. Did the Creator sin against the world when He flooded it and killed everyone and everything?

I’m sorry. But at which point after the creator destroyed the world via flood was I created?

Maybe I’m just an optimist. But when I read the destruction stories, which are in books which clearly survived the advertised destruction, I get the message that God really, really doesn’t want to destroy me. He kind of likes me.

Seriously. God gets P.O.d Then he relents. “OK, here’s your ark, sh*thead.”

I wish I could find better proof that God likes me than Scarlett Johanson who is pro-abortion. Which is odd as in a more perfect world I’d be “thrupling” with Ms. Johanson and creating more versions of herself.

But she’ll have to do. Scarlett Johanson and beer is all the proof that I need that there is a God, that He loves me, and He wants me to be happy.

Typical liberal drivel and deflection. God forbid you actually do something about pedophile predator priests.

“I’m going to focus on this WORLD SHATTERING issue that I have absolutely no control over, and ignore this issue that is 100% under my direct control.”

The Catholic clerical policy of abstinence violates God’s prime directive to men and women: “Be fruitful and multiply and fill the earth and subdue it, and rule over the fish of the sea and over the fowl of the sky and over all the beasts that tread upon the earth.” The progressive dysfunction and corruption, the secular incentives for the inclusion of transgender and trans-social clergy, male and female, was predictable.

That one has always puzzled me … you would think that I, as ruler over the fish of the sea, would be a better fisherman. But no, my subjects defy me. Thank God for beer or I might give up fishing altogether.

Earth is a proving ground. We confirmed our volatility, and presumably established our risk profile, with commission of original sin. Here’s to second chances.

Me serving in U.S. Navy didn’t contribute to the “Be fruitful and multiply” command in the Bible.

I’m the hunting uncle. I had a hunting uncle. He taught me how to use a shotgun. When I was 11 my Thanksgiving dinner was the duck I killed. I went on to bigger things. I became the hunting uncle. I would come back once a year, kiss my nieces and nephews, then go back out to make sure that anyone who wanted to kill them was hunted down and killed. And for you, too.

This took a team. I joined a team. The Unite States Navy.

This has been my contribution to God’s command to, “Be fruitful and multiply.” I have, in my limited capacity, as a small cog in a great wheel, helped give you the peace and freedom to do just that.

This sort of twaddke is easier than actually doing anything constructive.

We need a pope who is actually catholic.

This guy is exactly the idiot the church needs. Think of Christ whipping the money lenders out of the temple.

You give too much credit to the average person’s reaction to bad leaders.

People will follow, it’s almost programmed into the human psyche.

I don’t even put much credit in mine own counsel.

Lesson for today? The Sydney gave away all her advantages, based upon appearances.

It is always good to get a second, independent, opinion.

The Pope is just a Globalist Carpet Bagger?????

Where is Martin Luther when you need him?

Henry VIII will do.

So much for the Catholic Church as religion.

It’s a religion or moral philosophy. The question is who is its philosopher: God, or some secular god or goddess (e.g. Pope). The Catholics will have to decide. However, with progress, it seems the latter.

The Holy Father’s political positions are sorely testing me. I do not feel the reverence that is due.

As a leftist, his heart is the genocidal thieves instead of God.

For centuries, the Catholic Church considered the nature Satan’s home. That was the entire point in its fight against paganism. Now he wants to create a mortal sin against Gaia? This is one very, very confused and uneducated pope. Eventually, he’ll be having us dancing around the May pole (but not the delicious breakfast cereal from long ago).

Is there some scriptural basis for this, or is he just pulling stuff out of his mitre?

The Bible is a living document, don’t you know?

The next pope better be Pope Trump, or Catholicisim will be relegated to the same trash can as obama’s sick legacy.

He must be referring to the Green Blight, from excavation to reclamation, an artificial, nonrenewable, low-density, intermittent, and disposable energy converters.

What’s the point of becoming the Watermelon pope when we already know he’s the Red pope?

A fraction of a fraction, let the plants breath. Sequestering carbon dioxide is a sin against ecology. #HateLovesAbortion

Sorry asshat. I’ll stick to the ones Moses dragged down.

One of the benefits of Christ’s death on the cross was the forgiveness of our sins. But the reason Christ came is to establish his church. The Church. One pope said something like this to Napoleon: ‘You pompous little man. You think you can destroy the Church that hundreds of Bishops and priests have been trying to destroy for centuries.’

What has this guy done for oppressed people? Nothing. It’s so pathetic.

notamemberofanyorganizedpolicital in reply to TheFineReport.com. | November 23, 2019 at 2:31 pm

Isn’t this the Bachelor famous for prancing around in his
Prada ballet slippers?

I find it harder and harder to believe he is a true man of God. The Church is supposed to stand up against secular themes that place secular belief above God.
This pope maybe should have named himself Greta.

Someone needs to explain to this fool/tool that he is supposed to be a spiritual leader. Lay off the Socialism, run the church, lead the flock. A good start could be a purge of pedophiles.

The ignorance and outright bigotry against and about Catholics and Catholicism by posters here is really quite staggering. Sexual abuse in other religions as high or in many cases HIGHER and US public school at least 3-5 times as high…but hey keep bashing Catholics. And for the record I along with most Catholics I know are appalled and feel this pope is not right…I in fact believe him to be a false pope. As for climate alarmism open borders etc crap…what this pope has said and is saying doesn’t come close to the leftist lunacy thats been pouring out of other churches for years.

Sexual abuse in other religions as high or in many cases HIGHER and US public school at least 3-5 times as high…but hey keep bashing Catholics.

“Are they mortal or venial sins?”

They are political sins which are much more serious sins to a leftist.

So the Pope must be planning on rushing to Peking to protest thism, no>?

CAAM reported that sales of electric vehicles plunged 45% in October.

“Weak demand in China is expected to continue, and there’s still uncertainty in the U.S. market,” SNE Research said. “We could continue to see smaller growth for the full year.”

The picture accompanying the article shows a disposable glass bottle resting on the Pope’s table.

I’m sick of people not practicing what they preach. The Pope could use a glass like the ones we mere mortals use – you know – the ones we frak’n wash in our sinks at home.

Okay, after thinking about this a bit?

How much waste does Vatican City generate daily? Energy saving light bulbs? Appliances? Electric Popemobile? Are employees of the Catholic church required to use mass transit like trains and local trams when available – before using car/air transportation? We already know the answer to that.

How about fresh water? Are all Vatican City domicile showers fitted with low-flow shower heads? Faucets? What about toilets that use less than 3 gallons of water per flush?mI’ll bet they’ve more leaky plumbing than a Turkish bathhouse.

One may say I’m churlish and petty, and they’d be right, but I’ll be darned if the Pope gets to talk down to me like I’m a child in need of spiritual advice about recycling my household trash. The gall of it!!