After the Russian collusion story blew up on the Democrats, they have now “turned on a dime and now claim the real malfeasance is Republicans’ dealings with Ukraine.” 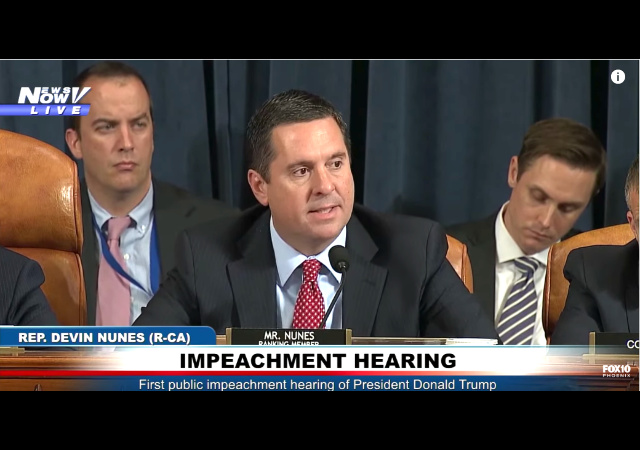 House Intelligence Committee Ranking Member Devin Nunes unloaded on the Democrats in his opening statement in its impeachment inquiry:

In a July open hearing of this committee following publication of the Mueller report, the Democrats engaged in a last-ditch effort to convince the American people that President Trump is a Russian agent. That hearing was the pitiful finale of a three-year-long operation by the Democrats, the corrupt media, and partisan bureaucrats to overturn the results of the 2016 presidential election.

After the spectacular implosion of their Russia hoax on July 24, in which they spent years denouncing any Republican who ever shook hands with a Russian, on July 25 they turned on a dime and now claim the real malfeasance is Republicans’ dealings with Ukraine.

And yet now we’re supposed to take these people at face value when they trot out a new batch of allegations. But anyone familiar with the Democrats’ scorched-earth war against President Trump would not be surprised to see all the typical signs that this is just a carefully orchestrated media smear campaign.

Nunes listed off the ways Democrats violated their own rules for an impeachment inquiry while forcing us to forget everything they have done wrong.

He also said the House should not hold any hearings until they receive answers to these questions:

The Senate should investigate the origins of the House impeachment scam and subpoena the witnesses that the House is refusing to subpoena. Shift, the Whistle blower, Joe Biden and Hunter Biden should be first.

“Cry havoc and let slip the gerbils of civility!”

The Republicans should be as disruptive and uncooperative in this sham as they possibly can. For starters, they could all stand up as one and chant “Ciaramella” repeatedly as Schiff pounds his gavel threatening to hold the entire Republican body in contempt if they don’t stop. What an appropriately pathetic scene for Schiff to be presiding over. Losing control of the floor right from the start. “Release the hounds Smithers!!”

The very moment Schiff perjured himself.

It is now up to Nunes/Jordan and the rest to drive the stake home. How long will Pelosi allow this to go on? I expect the Dems won’t be sleeping well tonight. Pelosi’s phone might never stop ringing from Dems who dread having to face the voters in 2020.

To say schiff is out of control is an understatement.

To say he’s now a criminal is accurate.

Perjured himself?! Even if he lied, how on earth is it perjury?

I like that phrase. Even better than “fake news”.

It’s either the Democrat media or the swamp media.

Otherwise, it is alternative media.

Agree, “news” is inanimate, but the “corrupt media” is real and tangible. Call them out BY NAME.

I’m not sure the Democrats are all that fearful of the public. They have the Alphabet Media, the ‘papers’ of record, and much of the Federal bureaucracy on their side. As we’ve heard for much of our lives, if the truth isn’t shared, lies will win…and the Democrats have an arsenal of lies that will be shared internationally on this issue as they have since the 1950s.

Don’t fool yourself that any independent or Democrat voter will get their insight on this Democrat clustermuck from Rush, LI, or any other conservative website. The lies will flow like water down a hillside…

This is actually great. Whoever the next Democrat president: start impeachment right after the swearing in!

Payback is a bitch.

If only Nunes or some other repub would name #EricCiaramella openly. Then when schiffless threatens them with some punishment, tell shiff “go f*** yourself you f****** liar”.

I’d guess the campaign donations to any repub doing the above would reach into the millions fairly quickly.