You can also “veto” a player’s turn if they brought up politics during the game. 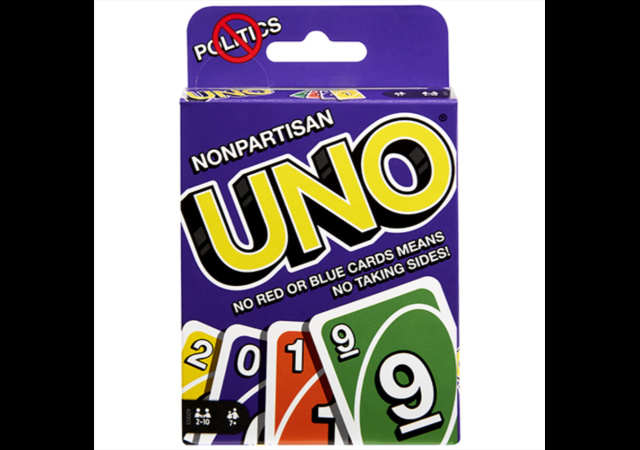 Mattel took out the red and blue colors in Uno to help those sensitive and easily triggered people avoid political debates at Thanksgiving.

It also introduced a “veto” card a player can use on someone who brought up politics during the game.

The company changed the package to purple from red. The package still shows a red card, though.

Then it replaced the red and blue cards with purple and orange. Mattel kept yellow, even though the Libertarian Party usually uses that color. Then again no one listens to us libertarians, amirite? (See, I can make fun of myself because I’m not a snowflake)

The veto card has a black background and a white stripe across the middle with POLITICS over the white line. But they use a red sign to cross out the word!

Odd. For the longest time, I was the only leftist in my family. We did just fine. Now I’m a libertarian and we’re still just fine. Somehow my father and I still manage to talk politics in a civil and polite manner.

Who gets triggered when they see the color blue or red? Anybody? It reminds me of South Park’s first Christmas special. The whole town complained about everything, which led the kids to perform a bleak dance number dressed in gray.

Who knew that growing up was optional?

Earth to Chastain: It’s a joke. Mattel is poking fun at the snowflake culture, and hopefully making some money in doing so. The market Mattel is targeting with this product is not snowflakes but people who like to laugh at them.

If only they would bring back “Shootin Shell” pistols and rifles…

And cap guns, TommieBurp toy machine guns, chemistry sets, lawn darts, fireworks that actually did something besides hiss and fizz…

Exactly. It’s not meant to be taken seriously. Hell, Parker Brothers just came out with “Monopoly Socialism” which actually mocks socialism. It’s just a silly little joke of a game, not something that’s indicative of anything at all.

Was that a joke, gonzotz? Do you have a Humor Permit? Off to the camps to you.