Gov. Hogan: “I strongly call on Mr. Elrich to immediately reverse this terrible decision and to apologize to the police and the citizens of Montgomery County.” 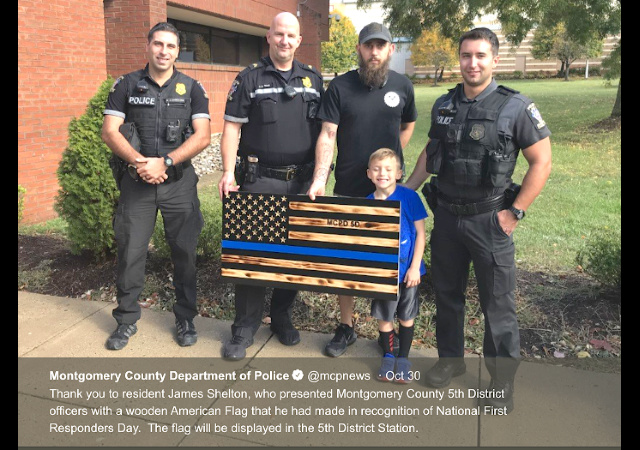 Republican Maryland Governor Larry Hogan unloaded on Montgomery County Executive Marc Elrich after he demanded a police station remove a thin blue line flag given to them by a young boy.

Montgomery County Department of Police proudly posted photos of the wooden flag with the young boy who made it for the officers.

Thank you to resident James Shelton, who presented Montgomery County 5th District officers with a wooden American Flag that he had made in recognition of National First Responders Day. The flag will be displayed in the 5th District Station. pic.twitter.com/kbAI32xHkY

No, it’s a show of support for law enforcement, especially those who died in the line of duty.

But Elrich caved to those who are offended by any support for police and law enforcement.

In response to this conversation, we wanted to post a note from Montgomery County Executive Marc Elrich:

“Acting Police Chief Marcus Jones and I understand the concerns of the community.”

“The flag provides a symbol of support to some but it is a symbol of dismissiveness to others. Because it is divisive, the flag will not be posted at the 5th District nor in any public space within the Police Department.”

“Under my administration, we are committed to improving police relations with the community and will immediately address any action that stands against our mission.”

Hogan did not hold back when it came to the flag. He lashed out at Elrich on Twitter for his submissive behavior instead of thanking the young boy for his kind act.

I’m offended and disgusted that County Executive Marc Elrich has prohibited Montgomery County Police officers from displaying a “thin blue line” American flag that was made for them by a father & his young son in honor of National First Responders Day.https://t.co/d8bDTWLgXl

I have attended the funerals of fallen law enforcement officers across our state, and I take time to thank them every day for their dedicated service and sacrifice.

We proudly hang this very same American flag in Government House in their honor. To outlaw these American flags from being hung in county buildings by law enforcement officers is outrageous and unconscionable.

I strongly call on Mr. Elrich to immediately reverse this terrible decision and to apologize to the police and the citizens of Montgomery County.

Hogan even made it a point to show that he has similar flags in the Governor’s Mansion in Annapolis.

We are proud to hang these Thin Blue Line flags in Government House to honor our brave law enforcement officers. A local elected official prohibiting police from displaying a flag given to them by a grateful child is disgraceful. pic.twitter.com/PmPGzfSSF1

Good for Hogan for not only showing support for his officers but for coming to the kid’s defense.

Nice way to change the original meaning of the “thin blue line”. Instead of what it originally meant, which was the “brotherhood” protecting their own when one of them does wrong, it’s now shown as a symbol of respect for the boys in blue.

The original movie is more accurate.

The ‘thin blue line’ is borrowed from the ‘thin red line’ of British soldiers defending an untenable position against over whelming forces – and winning.[1]. An apt usage of the term.

You’re thinking of the Blue Wall of Silence.

A correspondent for The Times, William H. Russell, who was present at the battle immediately wrote of the courage presented by the British troops. He illustrated the scene quite vividly, noting that between the Russian charging cavalry and the British regiment’s base of operations stood nothing but a “thin red streak topped with steel” ― the Thin Red line of the 93rd.

It was from Russell’s article that the phrase The Thin Red Line was derived. The successful defense was praised in Britain, partly because the costly war was becoming more and more unpopular among the general public.

Also, it served as a distraction from one other not-so-glorious event that took place during the Battle of Balaclava. The infamous Charge of The Light Brigade took place on the same day. Due to a misunderstanding in the chain of command, the Light Cavalry attempted a frontal assault against an artillery battery, which repulsed them, inflicting enormous casualties.

Nevertheless, thanks to the 93rd, the Thin Red Line remains an expression representing a thinly spread military unit holding firm against an overwhelming attack.

Due to their unparalleled bravery, the Highland soldiers were presented with more Victoria Crosses for that battle than at any other time in their history.

reminds me of the movie ‘Zulu.’

I believe the term is “Blue Wall of Silence”.

I’m not a big fan of the concept that the police are somehow special people who are different from “citizens.” However, too many of them die in the line of duty and they put themselves in harm’s way for short money. To me, Elrich, who is anti-ice, pro-sanctuary is a pig.

Tell him what you think:
https://www.montgomerycountymd.gov/exec/Contactcex.aspx

“The sheep generally do not like the sheepdog. He looks a lot like the wolf. He has fangs and the capacity for violence. The difference, though, is that the sheepdog must not, can not and will not ever harm the sheep. Any sheep dog who intentionally harms the lowliest little lamb will be punished and removed. The world cannot work any other way, at least not in a representative democracy or a republic such as ours.”

So, Obie. Where are you at 0300hr when someone you don’t know has a need for some help? Maybe their car ran into a ditch, or some unknown person is at their kitchen door, or maybe the teenage child who was supposed to be in by 2300 is still out and not answering the cell phone. Are you out there ready to render assistance and/or summon those who can? Yeah, thought so.

Special is as special does.

Since their militarization, they no longer see us as “citizens”. Now, we are “civilians”. The Other.

It’s not “militarization” Grizzly, it’s “elitism”. And it’s mostly not the fault of the police.

Honestly, Americans have developed a severe problem with expecting people in authority to save them. It’s certainly not the attitude of free citizens from whom derives the authority of gov’t. It’s the attitude of the ruled.

And, yes, despite my immense respect for the police*, it’s a grave problem in this realm. It leads to the electorate giving up their freedoms for security.

BTW, the militarization – where it occurs – is, imo, primarily because of the attitude of “it’s their job to handle scary stuff!”

(* BTW, there are also far too many police who have developed their own swelled heads because of this idea. But, if the people retain their own authority, the police have much less opportunity to abuse what has been delegated to them.)

And, wrangler? You know why most people don’t stop at 3am? Or, honestly, any time of the day? At least where I live, it is viewed as the job of the highway patrols and the cops. Handing over virtue (in this case, helping your fellow man) to the gov’t never ends well. (Oh, the other contributor is that the 24/7 media has made it seem like every car on the side of the road – or every car stopping to help – must be a serial killer unless it has flashy lights. Untrue, and unhelpful.)

Anyone who puts their life on the line for the populous is a “special” citizen..

How much you wanna bet the station is required to hang a photo of Montgomery County Executive Marc Elrich?

It really is amazing that a GOP pol such as Hogan could succeed in deep-blue Maryland. I guess there are some stubborn remnants of sanity remaining in certain Dhimmi-crat strongholds.

Outside Baltimore and Annapolis. You should see the gerrymandering around Baltimore. A work of art.

notamemberofanyorganizedpolicital in reply to venril. | November 5, 2019 at 9:49 am

notamemberofanyorganizedpolicital | November 5, 2019 at 9:48 am

Well…… Maryland is a Communist Dictatorship after all…..