Officials stated an ambulance arrives at an emergency in seven minutes. Those bleeding from serious injuries can die in three to five minutes. 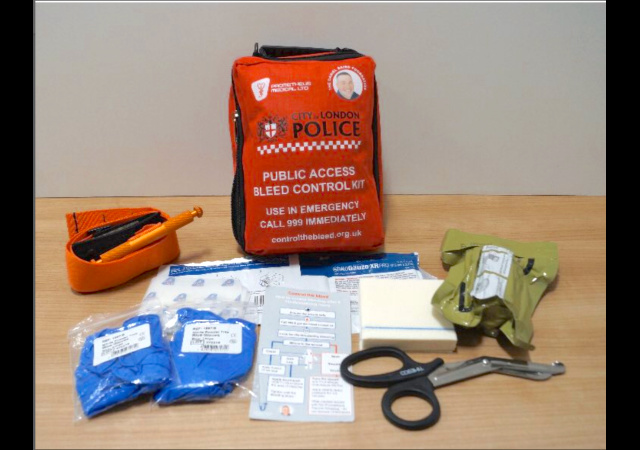 Bars and nightclubs around London have received bleed control kits from the police due to a spike in knife crimes.

The police distributed 320 kits, which include “trauma bandages, tourniquets and adhesive chest seals.”

London Police Chief Superintendent David Lawes described the kits as “simple,” but “can make a big difference.” If someone with massive bleeding does not receive help right away he or she will die.

Today we’re proud to launch an initiative, in partnership with @TheDanielBaird1, to provide life-saving ‘Bleed Control Kits’ to over 300 late-venues in the Square Mile.

The City of London Police worked on the kits with the Daniel Baird Foundation. Lynne Baird named the foundation after her son who died after a stranger stabbed him to death.

Lynne believes this kit could have saved her son. Daniel perished “shortly after arriving at [the] hospital due to catastrophic bleeding.”

Officials stated an ambulance arrives at an emergency in seven minutes. Those bleeding from serious injuries can die in three to five minutes.

Prometheus Medical, which developed the kits, provided training to employees at the bars and nightclubs.

Shawn Bewick, general manager at Slug & Lettuce, had no problem learning to use the kits. He thinks “he could pass on the skills to his staff.”

The United Kingdom has witnessed an increase in knife attacks:

Data released by the Office for National Statistics (ONS) in June showed that there were 43,516 police-recorded offenses involving a knife or sharp instrument in 2018-19, the highest figure since such records began in 2011 and an 8 percent increase from the previous year.

Hospital admissions for all injuries caused by an assault with a knife or sharp object have gone up by almost a third since 2013, to 4,986 last year, according to NHS England.

“We want to be as prepared as possible to deal with knife crime injuries.”

Assistant Commissioner of @CityPolice Alistair Sutherland says bleed control kits is ‘one of many tactics’ to try and deal with the city’s “knife crime problem”.

Makes You Want To Visit?

Passive adaptation to the symptom of the real problem. This is a terminal illness on display.

So, first aid kits? What am I missing here? How is it NOT common sense to carry first aid kits at your business? Where I work we don’t service the public, yet we have a first aid kit. Hell, we have a defibrillator. This seems like stupid propaganda to try and prove that the state has everything under control while those not allowed to defend themselves are stabbed to death.

“Defence” in the UK???? Victimhood is the highest calling especially when not reported. Now the land of hopelessness and gory.

The British authorities have addressed the scourge of “gun crime” (they really haven’t; in January 2018 the Guardian reported that “gun crime” was rising more quickly than other violent crimes except those using knives). So know we have the Brits addressing “knife crime” and we can probably expect similar results. Already criminals have figured out that those silly knife collection bins the cops have put around London and presumable other large cities provide convenient one-stop shopping for free knives.

What’s next on the agenda? The Brits will turn their crime-fighting superpowers on the scourge of “glass pint glasses and bottles violence” in pubs.

Actually the UK Home Office floated this idea in 2009.

Plans to replace the traditional pint glass with one made of shatter-proof plastic will not be accepted by drinkers, the pub industry has warned…”

But once the only legal way to prepare a meal at home is with a blender, and while at restaurants licensed professional chefs may still be allowed to use sharp knives under close police supervision the customers are only allowed plastic cutlery, the only thing left to do will be to replace pint glasses with plastic sippy cups.

Time to consign this anthem to the ash heap of history:

Cause of it all – Islam

Conservative remedy – deport them all. MEGA!

And in related news, British authorities are issuing sanitary napkins and “period proof panties” to middle schools, to help deal with the epidemic of torn hymens resulting from Muslim “grooming gangs” raping all of Britain’s young girls.

Well, that explains the need now for the bleeding kits.

Benchmade needs to release a special edition model of the 9050 to mark the auspicious occasion (not). The 9000-S I bought 20 years ago was one of the best purchases I ever made. “Safety? I don’t need no stinkin safety.” And an “infidel” is still on the table. These are just 2 reasons why I’d never live in the UK.

England had a booming gun trade leading up to WWI. Classic firms like Purdey, Holland & Holland, John Rigby, Boss, Greener, Dickson and Westley Richards. The knee jerk reaction to saving the monarchy during the post WWI era and the Irish Problem really started the ball rolling although England never really have a “gun problem”. Infatuated with bans, the drive to rid England of a problem they never really had leds them now to silliness. A few years back a single 22 rimfire cartridge was found on a sidewalk and a major alert and police presence ensued.

Why not just deport the problem?

May I suggest a headline edit? In the UK “bars” on the window.
The bleed kits are for pubs.

As Islam ascends, pubs will be a thing of the past. See…. the problem is solved.

Once they reach about 40% of the general population, it’s lights out for the UK.

Less than 40 per cent. For one thing, Muhammadens tend to self segregate, so there are dense pockets of Sharia compliance. Then those pockets spread. May already be too late, as courts would side with the Muslims. Look how grooming rape gangs have been protected by the establishment.

I did some research on immediate trauma and treatment for a story I was writing, and regardless of London’s state of gun or knife violence, having an immediate bleed control kit right there is going to save a lot of lives. Celox and direct pressure keeps the red stuff inside no matter how the hole got there. (although I’m not sure if the orange thing is a tourniquet. Seems a kit would need one or two.)

The orange thing in the picture IS a tourniquet. They can be effective for wounds on the arms and legs, but it takes some training to use them correctly and effectively.

If a wound is so bad the ambulance will be too late, you DON’T have time to learn how to use the tourniquet. They aren’t obvious or intuitive.

But even a badly-applied tourniquet is probably better than nothing, especially if it only needs to hold for a few minutes until the professionals arrive.

Scalpel violence is a leading cause of criminal casualties and socially-approved mortality.

The Brits were so smart in banning guns. It’s much easier to treat a wound when you don’t have to look for the exit point. Civilians always miss that.

Look at prince charles: these are the rarified morons that has been the soul of Britian, and which is destroying it from within, under a theory of prog-ism.

For Charles’s sins, poor Harry got stuck with a narcissistic hollywood idiot with a rolled back odometer.

I was a nurse on a class trip in 2006 and part of the trip was to Hershey Park in PA. I was not allowed to keep them with my first aid kit. Not because _I_ might misuse them, but because someone _could_ take them and wreak havoc. Ha, ha, ha, ha, ha, ha, ha, ha.