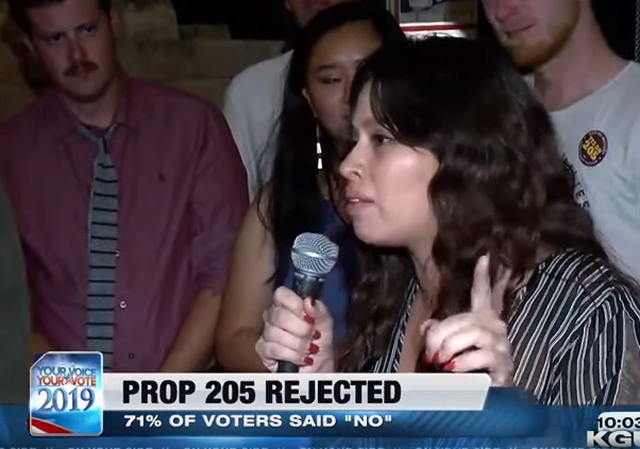 Liberal immigration activists got a proposal onto the ballot in Tucson, Arizona which would have designated the city as a sanctuary city. Voters rejected the measure, and it wasn’t even close.

A ballot measure that would have made Tucson the first sanctuary city in Arizona was overwhelming rejected by voters in the heavily Democratic city.

The measure to make the city an official sanctuary city was rejected by 71% of voters, according to unofficial election results released by the city late Tuesday.

Democrats designated Tucson an “immigrant welcoming city” in 2012, and the police department limited when officers could ask people about their immigration status. The move came after Arizona passed a law that required local police to check the immigration status of people they believed to be in the United States illegally.

“The city of Tucson, in all respects except being labeled as such, operates as a sanctuary city,” Mayor Jonathan Rothschild, a Democrat, told the Associated Press.

Jason Hopkins of the Daily Signal notes that even the city council, which is made up of Democrats, rejected the proposal:

Notably, the measure was opposed by every member of the Tucson City Council—all of whom are Democrats. The council members were concerned that its passage would lead to the loss of millions of dollars in federal and state funding. Leaders were very aware of the Trump administration’s fight against other local jurisdictions that have passed sanctuary policies, threatening to withhold federal grants as punishment.

Council members were also concerned that the measure would prohibit the city from working with federal law enforcement on issues that have no relation to immigration enforcement.

“While there are more than 560 sanctuary jurisdictions throughout the country, citizens nationwide are voicing their concerns and stymieing dangerous sanctuary laws. At the state level, Florida recently adopted anti-sanctuary laws. At the local level, Montgomery County, Maryland, has experienced a spate of violent crimes at the hands of illegal aliens, and also just incorporated anti-sanctuary policies,” Tragesser continued.

This short video report from KGUN News includes a tearful statement from one of the organizers behind the proposal:

Subjects! This outbreak of common sense will not be tolerated

Exactly. We just had an unnecessary “do over” election in North Carolina when Democrats refused to accept the results (no word yet on whether they plan to force a third election). The MSM/DNC axis has been pushing impeachment of Trump since before he was elected. The upcoming elections for Parliament in the UK are a “do over” forced by Remainders when they refused to accept the vote for Brexit.

The taste of liberal tears is so so sweet

NIMBY but okay for yours

Don’t forget that this is the home town of the Rondstadt family — think Linda Ronstadt. Hispanics were and are at the heart of the history of Tucson’s leadership.

The only place in Tucson where hispanics were discriminated against for years was at the University of Arizona.

Illegal immigration is a losing political issue. California passed Proposition 187 in 1994; the ‘Save our State’ initiative. It passed by 59% of the vote. The left dragged it through the federal court system. After the governorship went to the democrats, they effectively let the initiative die. This is why PDJT’s judicial appointments are a huge deal. In 2020 if the GOP can win back the House, improve in the Senate and of course re-elect President Trump, the wall will be built/finished. If the Legislature can de-incentivise illegal immigration by eliminating all benefits and pass E-verify, I believe many will self deport. We also need a system whereby all legal costs incurred by illegals using our court system are charged to their country of origin. If they don’t pay, reduce any aid money to their country by the amount we spend on them. With a strong Constitutional judicial branch, the left will be unable to resort to judicial activism to subvert immigration law.