Kent Confirms U.S. Has Always Had Conditions on Loans to Ukraine

Kent Confirms U.S. Has Always Had Conditions on Loans to Ukraine

“The pervasive and longstanding problem of corruption in Ukraine included exposure to a situation involving the energy company Burisma.” 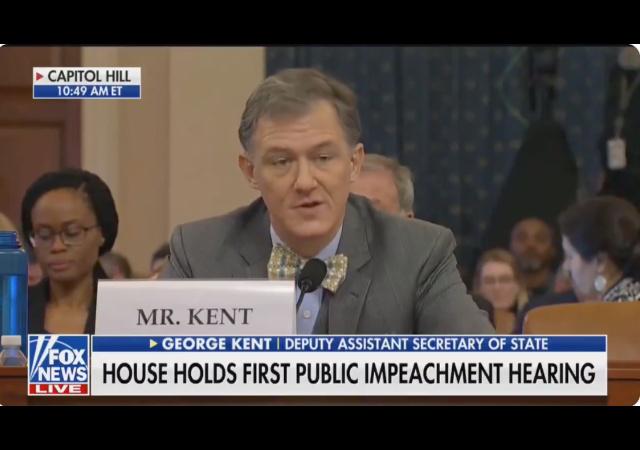 George Kent, a diplomat in the State Department, testified that America has always placed conditions on all loans to Ukraine:

“There are and always have been conditionality placed on our sovereign loan guarantees for Ukraine. Conditions include anti-corruption reforms, as well as meeting larger stability goals and social safety nets. The International Monetary Fund does the same thing. Congress and the executive branch work together to put conditionality on some security assistance in the Ukraine Security Assistance Initiative.”

Kent: “Conditions Have Always Been Placed on Aid to Ukraine Including Anti-Corruption…” ? #WitchHunt pic.twitter.com/LAJ4EGao6l

Kent also explained he raised concerns in 2015 about Hunter Biden sitting on the board at Burisma Holdings:

“The pervasive and longstanding problem of corruption in Ukraine included exposure to a situation involving the energy company Burisma,” said Kent. “The primary concern of the U.S. government since 2014 was Burisma’s owner, Mykola Zlochevsky, whose frozen assets abroad we had attempted to recover on Ukraine’s behalf.”

Kent, a diplomat in the State Department, noted that in 2015, he raised concerns to then-Vice President Joe Biden when Hunter, his son, had was named to a position on the board of the natural gas firm. The elder Biden was acting as the chief diplomat to Ukraine at the time.

“In February 2015, I raised my concern that Hunter Biden’s status as a board member could create the perception of a conflict of interest,” said Kent.

If you read Breitbart’s account of what’s going on, it is clear that both Taylor and Kent have no firsthand knowledge of President Trump’s conversation with President Zelensky. What they have is hearsay, and I believe Taylor’s hearsay is what he read in the Slimes. In a court of law, I believe that is inadmissible. If this continues, I don’t see how the Senate can go forward with a trial.

1. Taylor made clear what he knew first-hand, what he heard from others, and what was his own supposition. He did not pretend to know things he did not.

2. The senate is not a court of law, and it decides what evidence is admissible at a trial on an impeachment. If it wants to admit hearsay it can do so.

The progressive fascists will continue their hearings thru the 2020 election with the goal of damaging Trump so he loses his bid for re-election.

What’s important is that Trump had every right to investigate the Biden’s apparent corruption. Being a possible candidate for president doesn’t allow joe Biden to avoid prosecution for crimes he committed while VP. If fact, Trump was doing the Dems a favor by ensuring that they did make the mistake of nominating a criminal as their candidate for president in 2020. They nominated criminal Lying Crooked Hillary in 2016 and it didn’t work out well for them. They should be grateful to Trump for his help on ensuring their next candidate is honest.

If enforcing the law (or asking for its enforcement via the investigation of the possibility of actual corruption) gains you a political advantage, and that puts said enforcement out of bounds for an apparent conflict of interest, how can the Dems conduct an impeachment when it will obviously give them a political advantage? (Or at least they hope it does.)

It’s not just the loans to Ukraine that have conditions attached. Much of our foreign aid is conditional. Congress writes a lot of those conditions. This is not a surprise to anyone.

We have a treaty with the Ukraine that requires them and us to cooperate on corruption probes. We have loans with them that condition the same. Mr. Trump has every right to require Ukraine to deal with corruption as a basis for continued funds. That the corrupt person’s name is “Hunter Biden” isn’t supposed to matter.

Here’s a question: Joe Biden has wanted to be president for decades. Why didn’t he control Hunter’s avarice better than this?

“Why didn’t he control Hunter’s avarice better than this?”

It was Joe Biden who got the “job” for his practically unemployable drug addict son, Hunter. It was Joe Biden who saved Burisma by forcing Ukraine to fire to the prosecutor who was investigating Burisma. That’s why Burisma hired Hunter Biden and how they got their money’s worth.

Hang on a second people!

Are you telling me that the money the Democrats have been so interested in wasnt released because certain conditions hadn’t been met? And that the holds up had nothing to do with Trumps bribery/quite pro quo/corruption/benefitting his presidential campaign???

Why imagine that! We give money to somebody and attach conditions upon the gifting.

Every dime we give has conditions attached.

When it’s a dem administration, the condition is that it will get kicked back.

Boy, American diplomacy is f**ked from here on out. No expectations when we give somebody aid is really going to hamstring us getting anything we want.