Jon Huntsman is Back and Running for Utah Governor, Again

Jon Huntsman is Back and Running for Utah Governor, Again

Local polling has Huntsman as one of the top two candidates for Governor. 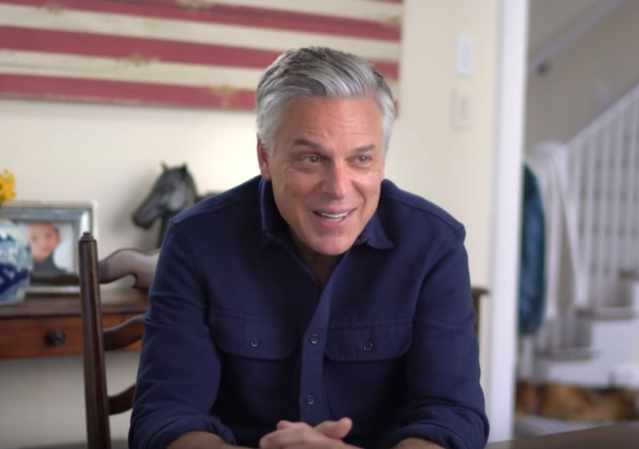 John Huntsman resigned announced his resignation from the Trump Administration three months ago where he served as the U.S. Ambassador to Russia.

In 2009, Huntsman resigned as Utah’s Governor in the middle of his second term to serve as a U.S. Ambassador to China under the Obama administration. Huntsman unsuccessfully ran for president in 2012.

I'm officially announcing my run for Utah Governor in 2020https://t.co/QrxX4KCy2G#HuntsmanGov2020

Huntsman left the governorship in the middle of his second term in 2009 to serve as ambassador to China in the Obama administration. He recently finished a two-year stint as ambassador to Russia under President Trump, which ended when he decided to return to Utah last month. (Huntsman had announced his resignation in August.)

“We’ve served our country in the top two diplomatic posts in the world,” Huntsman said in a campaign video featuring him and his wife Mary Kaye Huntsman. “Now we feel it is time to give back to our home state. Again.”

Huntsman unsuccessfully sought the Republican nomination for president in 2012. Earlier in his career, he served as the U.S. Ambassador to Singapore under President George H.W. Bush.

Local polling has Huntsman as one of the top two candidates for Governor. From Politico:

Huntsman had been mentioned as a top prospect within the Republican primary for governor. His entrance adds to the number of competitors in the field. Lt. Gov. Spencer Cox is running, as is Salt Lake County Counctilwoman Aimee Winder Newton and businessman Jeff Burningham.

Cox has the endorsement of retiring GOP Gov. Gary Herbert, who replaced Huntsman in 2009 and declined to run for a third full term next year.

The few surveys of the race indicate that Huntsman and Cox would be the two most competitive candidates. A Salt Lake Chamber poll found Huntsman with 30 percent support among Republican voters, compared to 34 percent for Cox.

In his announcement Thursday, Huntsman alluded to his experience as a governor, a likely prominent theme in his candidacy. Prior to resigning in 2009, Huntsman’s approval ratings were as high as 84 percent.

“Just to put it in a nutshell, I believe that we face an inflection point as a state,” Huntsman said. “I think that the years ahead are going to be absolutely critical, and the choices that we make are going to shape the future for years to come. That’s what governors do. They look into the future. They anticipate what our needs are going to be. They assemble the best people we can find, and they make choices that aren’t immediate but resonate for a very long time.”

“We’ve served our country in the top two diplomatic posts in the world,” Huntsman said in a campaign video featuring him and his wife Mary Kaye Huntsman. “Now we feel it is time to give back to our home state. Again.”

It plays really bad when politicians talk like this, as if they are performing some selfless act by taking a prestigious gig with lots of perks.

“If you elect me governor of Utah, I promise to exile Pierre Delecto.

I would say Huntsman and Pierre Delecto would be candidates for on the down-low Mormon Brokeback Mountain.

But the truth is they are so narcissistic that they really want their individual clones.

The Courtier Lifestyle: Entertain and Socialize and How To Make the Rubes Foot the Bill.

Impoverishment: My Lifetime of Service.

We Are Not Amused: Distancing Oneself from the Household Staff.

Sounds like he’s resigned to dedicate his life to public service.

There can’t be that many, they did elect Pierre after all… though I understand he wears those special underwear so it covers most “ills”.

“We’ve served our country in the top two diplomatic posts in the world,” Huntsman said in a campaign video featuring him and his wife Mary Kaye Huntsman.

Or did he pull a Woodrow Wilson and have his wife do the job?

Prepping to run against Nikkie Haley in 2024. Maybe Romney can run for Governor of Massachusetts again.

Something about this guy just sort’a creeps me out. I sure-as-hell would not go to Sunday school lessons with him.

I will be your governor and work hard for the people of Utah until something better comes along.

I wonder, should this turkey win the position, how long would he “serve” till he found something else he would rather do?

One of my disappointments with Palin was her quitting her position in Alaska. I understand why she did, but it leaves me feeling she could do the same for any elected position should the water get a little too hot. And I only voted for McLame because of her.

I’m sorry, but being an Ambassador isn’t as important as being a Governor, but it allows him to talk with the “royal we”… sure it can assist with relations with a foreign government, but it rarely has as much impact on the American people as being a Governor, both positive or negative. Most view Ambassadors are strutting peacocks, who take a lot of perks for a cushy job for the most part.

Why would you trust your vote for this “we” man would mean much, as he was far too willing to leave to something shinier than being Governor of a state? Seems like you could be throwing your vote away.

My memory is foggy, but it was my understanding that Utah uses party conventions for nominations for statewide office, holding a primary between the top two only if no one gets a supermajority (65%?) by the second (?) ballot. Did they get rid of this system in favor of a direct primary? Anyone from Utah know?

If they changed it, it was because Bob Bennett was almost kicked to the curb by convention delegates in 2010.

Can Huntsman and Pierre Delecto be products of inbreeding? I know several Mormons and they don’t seem to have any of the personality issues that these two do. Is Utah applying the “Peter” principle here? You know promoting a person to get them out of a job with real responsibility.

Are people in Utah this stupid?

Please, no. No state is going to lead the way with retread Republicrats.

Didn’t he used to be the Republican potential presidential candidate Obama feared the most — in a scene reminiscent of Br’er Rabbit begging not to be thrown into the brier patch?