“Every time prominent Jews are at the center of media attention in Italy, they get subjected to online anti-Semitic abuse.” 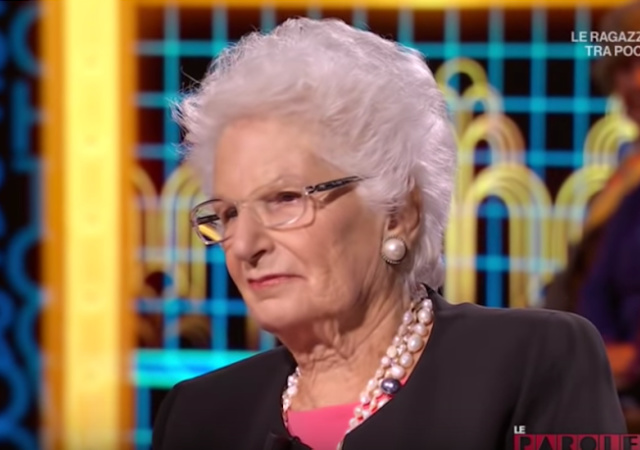 Auschwitz survivor Liliana Segre, 89, is a senator-for-life in Italy. She has pushed for a parliamentary committee to combat hate and anti-Semitism in the country, known as the Segre commission.

Segre now has to have constant police protection due to receiving over 200 anti-Semitic abuse and threats.

The Italian president gives the title senator-for-life “to former heads of state or accomplished artists or scientists.” These people have “the full power and authority of an elected lawmaker, as well as some legal immunity.”

Segre’s motion passed even though far-right groups abstained from voting.

But since the passing of the commission, Segre has faced hundreds of threats a day. From CNN:

“Every time prominent Jews are at the center of media attention in Italy, they get subjected to online anti-Semitic abuse,” Stefano Gatti, from the center, told CNN.

“The anti-Semitic insults come from far-right circles that have a past, and sometimes present, of violence. It’s part of their radical rightwing code, this pugnacious attitude.”

Two paramilitary carabinieri officers now accompany Segre while out in public after “Forza Nuova party members put up a banner in Milan on Tuesday near where Segre was speaking for an event.”

“Since the beginning of the year to the end of September, we recorded about 190 anti-Semitic incidents, about 70% online,” Gatti said.

They include vandalism, defamation, insults, and threats. For comparison, the total episodes for the whole of last year were 197 and 130 for 2017.

As a side note I learned something new today. I was like, “WTH is a senator for life?”, so I looked it up. Apparently in Italy up to 5 senators are these so called senators for life (not counting past presidents), each appointed by the president. Think of it like SCOTUS. When one of these senators dies, a new on is appointed. And all past presidents become automatic senators for life.

Not exactly. Any President can appoint up to five SFL, and actually we have had up to nine in operation. Mind that they have a long history of being always chosen from the center-left or very left, and they have the same voting rights as the ordinary Senators. This can thumb the scale when the electiin margins are very narrow, as we have seen quite often in the last 25 years.

It’s a good thing that the United States would never put up with such a thing as “Senator for Life”.
*cough*JohnMcCain*cough*

The poin is: each Prez can name 5 people, but nowhere in the Contitution it says that to name a new one a SFL must die. The total number is never very high because the nominees are usually very old, and the Prez lasts 7 years.
Anyway the 6 or 7 SFLs were vital in keeping alive most of the leftist Govmts of the last decades.

The point is: each Prez can name 5 people, but nowhere in the Contitution it says that to name a new one a SFL must die. The total number is never very high because the nominees are usually very old, and the Prez lasts 7 years.
Anyway the 6 or 7 SFLs were vital in keeping alive most of the leftist Govmts of the last decades.

The point is: each Prez can name 5 people, but nowhere in the Constitution it says that to name a new one a SFL must die. The total number is never very high because the nominees are usually very old, and the Prez lasts 7 years.
Anyway the 6 or 7 SFLs were vital in keeping alive most of the leftist Govmts of the last decades.

https://it.m.wikipedia.org/wiki/Senatore_a_vita_(ordinamento_italiano)
Good luck with google translate. It says that the record number was reached in 1992, at 11: 9 nominated, 2 ex Prez.

Right, because one president during the 80s interpreted it the way you are. He appointed 5 himself. Presidents after him went back to interpreting it as only 5 ever. Currently 5 appointed.

Well, this is just another hoax from the left. It’s a bit complicate, but it suffices to say that Ms. Segre has no social media accounts, and stated that she was no aware of any threats or insults to her. All these “hate speeches” arrived on other people’s accounts, i.e. leftists.
And they arrived just days before the Parliament was due to discuss the left’s new “hate commission”‘s installment.

I wondered if something like that might be at play when they placed all the blame on “far right” groups.

So basically, if my paisan is correct, Italy is one hosed up place.

Now I’m on my knees thanking my ancestors for turning their backs on the s**thole and coming to America.

During WWII my dad served in the USCG (part of the Navy at the time) in the Pacific.

My uncle Tony served in the USN in the Mediterranean. Even after Italy switched sides in ’43 a lot of Italians were contemptuous of Americans.

So much so that my uncle Tony was confronted with, but did not put up with, Italians that referred to Americans as “Merde di Cano.”

In Italian, American is Americano. In the southern dialect from where my family is from, Salerno, the last vowel is dropped off.

So on liberty in Napoli my uncle heard Italians welcoming USN Sailors with words like, “You Merde di Can? Come on in”

Merde di Cano means dogs**t. What the Neopolitans were trying to get away with was that “Merde di Cano” if you say it fast enough can be confused with “Mericano.”

As I said, Uncle Tony was having none of it. Neither was Shore Patrol, once they were informed. Whether or not some well-earned pistol whippings were administered I can’t say.

I am so grateful to my dad and uncle. It’s because of them that I spent what were mostly 20 peaceful years in the USN. They fought their way back from defeat at Pearl Harbor to a force that was capable of sea denial. Then sea control. Then sea supremacy. Then when I joined it was such the one thousand pound gorilla in any body of water I sailed in it can only be called sea majesty. Because when and where a USN battlegroup sailed everyone else stayed in port.

It wasn’t always that way. The giants on whose shoulders we stood upon earned that privilege in blood.

“… The bomb impact was initially a huge crash, followed seconds later by a massive explosion that lifted the ship right out of the water, and knocked everyone to the deck. The bomb passed through the turret top, killed everyone inside, and exploded at the keel, blowing the bottom of the ship out and causing a huge geyser of water and debris to come out the port side a little forward of the bridge. It covered us with water, and almost immediately smoke started pouring from the hole in the turret. We all figured the magazine would explode at any second, but it didn’t. When the bomb exploded it blew out the keel directly under the magazine, and the water flooded the magazine before it had a chance to go off.

The explosion blew open both the #2 and #1 magazines forward, and killed most everyone in the bow forward of the #3 turret.

The comments are by Admiral H. Kent Hewett, USN, who was something less than an admiral the day the USS Savannah was nearly blasted out from under him.

For any other Navy a bomb big enough to blast through the armor of a turret, blast through everything else, then blow through your keel and blast out your bottom is a kill shot.

Not for the USN. The Savannah was back in action in three months. You have no idea how demoralizing it was to our enemies that we could resurrect ships they thought they had killed.

I’m going to miss Sear’s when they go out of business. Every time they have sales on tool boxes I buy them and fill them up with first aid supplies.