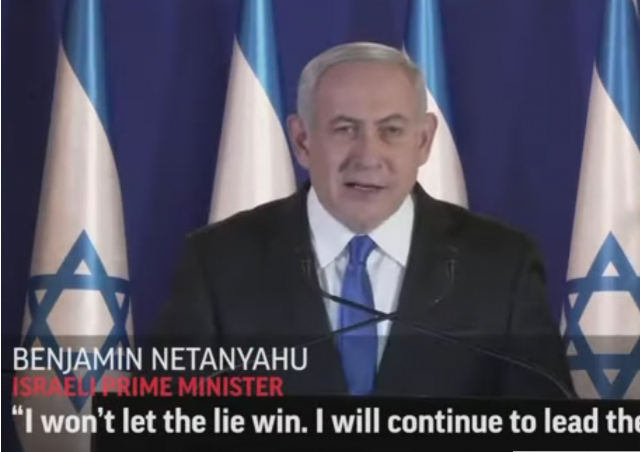 The indictment against Netanyahu comes after three years of investigations that looked at allegations of him accepting hundreds of thousands of dollars worth of gifts from wealthy businessmen, and trading favor with media houses in exchange for favorable coverage.

“It’s time to investigate the investigators, and the prosecution that authorizes these tainted investigations. I won’t let lies prevail,” he added.

In a televised statement, Prime Minister Netanyahu called the indictment an “attempted coup,” saying the timing of the announcement “highlights how much this decision is tainted by extraneous considerations, aiming to bring down a right-wing Prime Minister.” Israel’s longest-serving prime minister vowed to “continue leading this country,” dismissing media speculations of him stepping down in the face of the charges.

The news website Times of Israel reported the details of the indictment:

In a decision that drastically shakes up Israeli politics amid already ongoing chaos, Attorney General Avichai Mandelblit announced Thursday that Prime Minister Benjamin Netanyahu will be charged with criminal wrongdoing in three separate cases against him, including bribery in the far-reaching Bezeq corruption probe.

The announcement comes at a time when the country is in an electoral deadlock. Netanyahu and his main rival, former army chief of staff Benny Gantz, have failed to forge a coalition despite two consecutive elections this year. The country may be drifting towards a third election, Israeli newspapers speculate.

The current political stalemate could also delay a formal indictment against the prime minister by half a year, Times of Israel explained. “[D]ue to the current political deadlock it will probably take several months before he can even formally file the charges in court, the news outlet noted.

The final verdict could take years, and might depend on whether Netanyahu “tries to draw it out as long as possible to delay his conviction to stay in office,” the Jerusalem Post noted.

Avichai Mandelblit’s title is universally mistranslated into English as “Attorney General”. This is wrong.

An attorney general is a politician, a member of the cabinet (if there is one), the minister in charge of the justice department or equivalent. He is chosen by the head of government or the ruling party, in the same process that chooses all the ministers. He can therefore be expected to be loyal to the government and it would be extraordinary for him to act against it.

Mandelblit’s title is “legal adviser to the government”. It seems to me that the closest equivalent title in English-speaking countries is “Solicitor General”.

Most importantly, his legal “advice” is binding on the government. That’s right, the client must obey the lawyer, cannot choose a different lawyer, and cannot be heard in court except through the lawyer. The same happens in every government department. There was one case where a minister appeared in court shouting that his department’s “legal adviser” was misrepresenting the department’s position (as set by him, the minister), and the judge told the minister to shut up, your department’s position is whatever your lawyer says it is.

This is why no matter how the people vote the results are the same. The state is run by the career civil service and the judiciary, both of which are mostly self-selecting. (Oh, yes, to top it off judges are appointed by a committee on which the government is represented, but does not control. The strongest bloc on the committee is a set of judges, and lawyers who depend on the judges’ goodwill and so vote as the judges tell them.) And they see their job as protecting “enlightened values” from the ravages of the barbaric voters.

The theory underlying these so-called charges, that positive media coverage can constitute a bribe, is peculiarly similar to the one that Adam Schiff recently floated, that a Ukrainian investigation into Burisma would constitute a bribe to Trump in order to get the military aid and a White House meeting, so that by proposing such a deal he was soliciting a bribe.

It’s also very similar to the theory of “Honest Services Fraud” that overzealous prosecutors used to go after prominent businessmen and politicians for acts that they had no way of knowing in advance would be considered illegal. The Supreme Court eventually put a stop to it. Unfortunately in Israel the Supreme Court is an integral part of this “shallow state” and is promoting exactly such vagueness that gives it and its minions control over elected governments.

If that theory held ANY water here, then Obama, Warren, Pelosi, Schiff, AOC, Sanders, Biden, Nadler, Schumer, both Clintons, and more should all be locked up.

Maybe Mandelblit can save some time and just get a copy of Pelosi’s articles of impeachment to use in this witch hunt. In the spirit of “best practices” and all. I mean, if someone already has a square wheel, why reinvent it?

“The final verdict could take years, and might depend on whether Netanyahu “tries to draw it out as long as possible to delay his conviction to stay in office,” the Jerusalem Post noted.”

Of course the Jerusalem Post noted that BiBi would try to delay his (make sure everyone understands that it is inevitable) conviction. The Post functions the same way the WaPo and NYT do here. Given the way the Israeli judicial system (I won’t use “justice”) operates, that isn’t an unreasonable assumption for a proven innocent person.

I see Israel has their own Little Adam Schitt problem.

One thing I heard on NPR (hey, I have to listen to something on the way to work) is that Israel law requires Ministers who have been indicted to step down, BUT not Prime Ministers. And that Bibi was both Prime Minister and held several secondary Ministrarial posts, so he’d be forced to step down from them, which was probably the main goal of the prosecutor.

As I said, heard on NPR. Salt well.

Oh look, the uber leftists have taken their bag of nation-dividing tricks to Israel.

Israel was suffering from this long before they started it here.

Jews will be Jews. Who knew?

What the hell is with Jewish liberals, anyway? Besides, God already created lemmings.

Lemmings don’t commit suicide. When Disney made that film they had to push them over the cliff, because they refused to go over on their own. What happens when they swarm is that they’re so tiny that if they’re running fast they don’t see the cliff before they’ve run past it.

And when they get to water they try to swim across it. When you’re that short you can’t see the other side of even quite a small creek, let alone a river, but if you start swimming you’ll soon come to the other side. So when they reach the ocean they try the same thing. They don’t know the difference between an ocean and a river. So they try swimming across it and eventually drown.