More than 1000 people have been detained since the protests began on Friday. 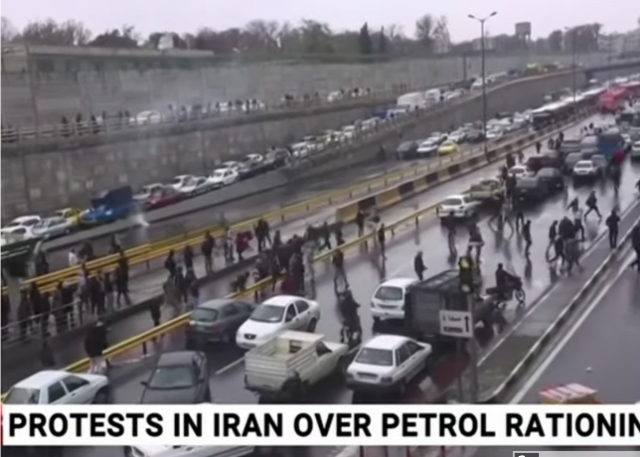 Anti-regime protests erupted across Iran after the regime imposed rationing of gasoline and hiked fuel prices.

People took to streets in more than 100 cities, including the Iranian capital of Tehran. Iran’s so-called Supreme Leader Ayatollah Khamenei lashed out at the people on Sunday for protesting the three-fold fuel price rise, calling them “thugs” and “hooligans.”

Iranian authorities shut down the internet for the entire country of 80 million people, fearing further mobilization against the regime. Demonstrators were seen venting their anger against the regime by destroying statues and billboards of Khamenei. BBC aired amateur footage of protesters burning down state-owned banks in the cities of Behbahan and Pardis.

The government shut down internet access across the nation of 80 million people to staunch demonstrations that took place in a reported 100 cities and towns. That made it increasingly difficult to gauge whether unrest continued. Images published by state and semiofficial media showed the scale of the damage in images of burned gas stations and banks, torched vehicles and roadways littered with debris.

Since the price hike, demonstrators have abandoned cars along major highways and joined mass protests in the capital, Tehran, and elsewhere. Some protests turned violent, with demonstrators setting fires as gunfire rang out.

It remains to be seen how many people were arrested, injured or killed. Videos from the protests have shown people gravely wounded.

The United States condemned the Shi’a Islamic regime for using deadly force against protesters and for cutting people’s access to the internet and communication.

“The United States supports the Iranian people in their peaceful protests against the regime that is supposed to lead them,” a White House statement said. “We condemn the lethal force and severe communications restrictions used against demonstrators.”

President Donald Trump’s administration is pushing ahead with its policy of “maximum pressure” against Tehran. The President pulled the U.S. out of the Obama-era nuclear deal with Iran last May, snapping back economic sanctions on the regime.

We stand by the people of Iran as they demand accountability and transparency from their government. Iran did not use the billions of dollars in JCPOA sanctions relief to build schools or hospitals, but to fund terrorist proxies throughout the Middle East. #IranProtests pic.twitter.com/4IBraxJwqX

Richard Grenell, the U.S. ambassador to Germany, asked European allies to pool technical expertise to restore the information blackout placed by the Iranian regime on its people.

“We have the technical ability to turn the internet on for the people of Iran. And ensure it is free of government blockers,” Ambassador Grenell said. “Europe and America should do it together.”

The Iranian regime has squandered billions of dollars it received from the Obama administration in the wake of the 2015 nuclear deal. A large part of the money has funded pro-Iranian jihadi groups in Syria, Lebanon, and elsewhere in the Middle East. With the Obama-era reserves drying up, the regime faces economic bankruptcy as sanctions imposed by Trump take hold. French President Emmanuel Macron has offered Tehran a $15 billion credit line to keep the fledgling regime afloat.

The Iranian currency rial is in free fall since the U.S pulled the plug on the nuclear deal. The regime is covering up its failure by staging Sharia-style public executions of currency traders. The major international buyers are shying away from importing Iranian oil, fearing secondary sanctions are part of President Trump’s ‘Maximum Pressure’ on the regime and its trading partners.

Just think how different life would be had Carter leveled them instead of being the effeminate p^ssy that he is.

“The government shut down internet access across the nation of 80 million people to staunch demonstrations that took place in a reported 100 cities and towns.”

Iran’s so-called Supreme Leader Ayatollah Khamenei lashed out at the people on Sunday for protesting the three-fold fuel price rise, calling them “thugs” and “hooligans.”

You know what they say: “It takes one, to know one”.

looks like they’ve already burned through the pallets of cash that Obama gave them. What’s amazing about this episode is the the regime *knew* there were going to be widespread protests if they did this; they’re so broke that they had to do it anyways.

They barely have enough cash left to keep the good squad paid off.

Wonder what info they are/were able to get about Hong Kong?

Hong Kong riot police carry out dawn raid on university after battle with protesters (See the buildings on fire in the article’s pictures.)

Wonder if Germany and the EU train Iranian soldiers also?

Barry in reply to notamemberofanyorganizedpolicital. | November 18, 2019 at 10:36 am

As I continue to say, Germany is no ally, pull everything we have out of there.

notamemberofanyorganizedpolicital in reply to Barry. | November 18, 2019 at 10:55 am

I’ve concluded that Europe will have no peace until Germany is broken up into the many kingdoms it was pre-Bismarck.

stevewhitemd in reply to notamemberofanyorganizedpolicital. | November 18, 2019 at 3:14 pm

This is obviously a message from their Allah that trucks and cars are harem. Muslims must give us all ways of the Westerner, from electricity to cell phones to indoor plumbing, and more, and return to the mode of travel used by their Big Mo prophet.

“must give up all ways of the Westerner”

notamemberofanyorganizedpolicital in reply to fscarn. | November 18, 2019 at 10:56 am

But Big Mo cribbed almost all his ideas from Judaism and Christianity, so that means they must give up……

If we had a CIA that was worth anything at all and could be trusted to keep its mouth shut, the remaining refineries, pipelines, and ship loading platforms would be have a whole series of unfortunate accidents…