I’m an Indian Immigrant. I was Accosted in Bonn, Germany, Because I was Mistaken for a Jew

I’m an Indian Immigrant. I was Accosted in Bonn, Germany, Because I was Mistaken for a Jew

I wore a Kippah in solidarity with Jews at a rally against antisemitism. Now I know the danger of “walking while Jewish.” 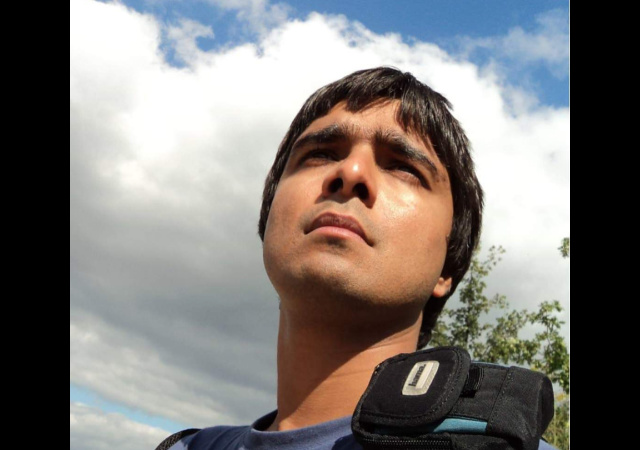 As a foreigner moving to Germany, I sensed the Antisemitism early on. I knew the perpetrators all too well. They were mostly men my age, the majority of them from the Middle East or Muslim-majority North Africa.

As I strolled Cologne’s inner city for the first time some ten years ago, the Jew-hatred stared right at my face.

It was not the well-disguised Antisemitism that my progressive and woke German friends and colleagues displayed. Like the time when one of them claimed that Palestinian suicide bombers killing innocent Jews were mere “freedom fighters.” Or things you heard between the lines every time Jews or the Jewish State was mentioned in an academic debate.

The Jew-hatred on the street was free from polite inhibitions you generally expected from educated Germans mindful of their historical responsibility and guilt. These men, mostly from Turkey or the Middle East, do not know such restraints. They praised Hitler, glorified the Holocaust, and called for the destruction of Israel. Harmless conversations in cafés or streets often veered towards wild claims of Jewish conspiracies.

Even for Indian migrants like me, with no ax to grind on the issue of the Middle Eastern conflicts, it was clear that something was deeply wrong here. In the wake of the 2012 Gaza conflict and the ensuing antisemitic hate-fest on the streets of Cologne prompted me to mobilize fellow Indians living in Germany and the West. If immigrants fueled Antisemitism on German roads, then we immigrants had to take it head-on.

The overwhelming support I got from the Indian community led to the creation of the social media initiative ‘Indians For Israel.’  My subsequent visits to Israel and my interactions with the German Jewish community only strengthened my commitment.

My activism has made me a target for online hate, making my loved ones worried about my safety. I, however, take all this in stride. We in Europe need to stand up against this surging Antisemitism while we still have time. If it’s Jews today, it will be Christians or Hindus tomorrow.

This weekend reminded me again that seven decades after the Holocaust, walking while Jewish is an invitation to violence and harassment on German streets.

On Sunday, I attended a small rally against Antisemitism in the city of Bonn when an elderly Jewish woman approached me. She told me to be careful about wearing a Kippah, the Jewish skullcap, in public. I was the only participant wearing Kippah at the event, and this graciously kind woman showed concern for my safety.

She told me how a gang of migrants attacked her for donning a Jewish religious symbol, pointing to her tiny pendant spelling the Hebrew alphabet “chai,” which also symbolizes life. She said she is careful not to display it openly.

Just as she turned away, a passerby, thinking I am a Jew, yelled at my face to f*** off.

In my ten years in Germany, my beloved adoptive home, I have never witnessed anything nearly as appalling.

This is not a freak or a bizarre incident. Last year, in the same town, a “man with Palestinian roots” attacked a visiting Jewish professor. The Baltimore-based academic wore a kippah at the time of the assault.

German Jews no longer feel safe on the streets. According to the media reports, around 70 percent of the Jews residing in Germany have stopped wearing Jewish symbols in public to avoid attacks from “migrants of Turkish and Arab origin.”

The rally itself took place in the backdrop of recent attacks on German synagogues. On October 9, a German neo-Nazi tried to storm a synagogue in the city of Halle while the congregation marked Yom Kippur, the holiest day in Judaism. Two passersby were killed in the terror attack. Just two days earlier, a knife-wielding Syrian migrant tried to enter a Berlin synagogue while shouting “Allahu akbar” and “F*** Israel.” The Berlin police allowed him to walk free.

The multicultural paradise promised by Germany’s media and political elite has turned into a nightmare for the country’s tiny and beleaguered Jewish minority. Last year, the number of violent antisemitic attacks against Jews rose by 155 percent in the German capital of Berlin as compared to the 2017 figures, a study published by a leading watchdog group showed. The problem is compounded by the government’s refusal to address the issues of Muslim Antisemitism. With Berlin pursuing a reckless open door policy for illegal immigrants, mostly coming from Arab North Africa and the Middle East, things won’t get better anytime soon.

The EU has ruined Germany.

The EU has ruined Europe.

notamemberofanyorganizedpolicital in reply to MAJack. | November 5, 2019 at 10:03 am

The EU is nothing more than the German Fourth Reich.

No real peace will come to Europe until “Germany” is broken up into separate nations as they were pre-Bismark.

beagleEar in reply to notamemberofanyorganizedpolicital. | November 5, 2019 at 11:43 am

Why is that?
You may be correct, but I don’t understand the dynamics. Germany is/was an immensely talented nation, and they are educated enough to understand consequences. It’s not an accident that the Western version of the printing press was a German invention.*

*As far as I know, Gutenberg did not have previous Chinese examples to work from.

That’s the obvious point. Talented Germans predate the 1871 unification. The continuous string of disasters for Germany and its neighbors postdate unification. Therefore it is not unreasonable to suspect that the problem isn’t Germany so much as a unified Germany. So “un-unifying” it is not an unreasonable proposition.

This might be why Germany has welcomed so many muslims into its borders – it allows them to do that which they have always wanted to do, attack Jews.

Doing such attacking is beneath The Master Race. The muslims are “the help”.

Meanwhile, CNN is doing a story on the rise of antisemitism in Dresden focused solely on white guys as the perpatrators.

Merkel is obviously discontented that the previous fix for those Jews was interrupted and has imported Allah’s Messengers to finish the job.
Still unexplained: Half the Jews in the USA are applauding that move. I sure hope that’s only because they have Alzheimer’s.

Great post, Vijeta! I’m so sorry you had to experience this, but it does illustrate the serious problem of rising antisemitism in Germany (and across Europe and the western world).

Thank you for these kind words of support.

I personally can deal with it. But it’s tragic, to put it mildly, that seven decades after Holocaust the Jews in Germany have to live with this.

Great article. Very insightful (and terrifying). Only reinforces why I visit LI daily which is to get access to stories like this that I cannot find elsewhere.

Your encouraging words mean a lot to me as a blogger for Legal Insurrection.

Your work is immensely important, informing us of things we may not otherwise ever learn about. Thank you, and thank you again.

I wonder who the Jews of Germany voted for when Merkel managed to keep her position? Same goes for France and any other EU nation dealing with this. Are the Jews fighting for themselves? Or are they just hiding in hopes that the ravening beasts don’t notice them anymore?

If they are like the Jews here, the vote for their own eventual death.

Nazism was neo-Pagan, and Christian America defeated it. Christians hid Jews at great risk to themselves.

But for some reason modern Jews blame Christians for the Holocaust, so have been doing things to undermine the culture. 70% voted for Hillary. Maybe they feel as a minority that it would be better to promote lots more minorities. How is that working out? Do the Minnesota or Maine Somalis care about the Holocaust? Do the immigrants from south of our border? The “Women’s March” organizers? Chinese? other Asians? Indians (Mumbai)?

I think unless this multicultural democide is reversed, the next Democratic administration will declare Israel an apartheid state, impose Iran style sanctions, and the EU will go along with it, and we will introduce, not veto UN sanctions in the security council.

And when I try to point it out, I’m called an anti-Semitic Jew-Hater. But so has Ilhan Omar, but she ignores it. I’m trying to save them since they are tearing down the wall that is protecting them. She wants it down faster.

German Jews should move to the Holy Land. And take their money with them. Europe will be a Muslim, Middle Eastern-style cesspool of a failed state in 20 years.